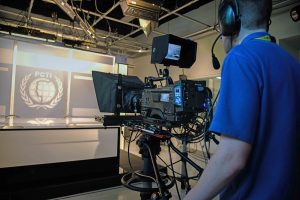 The new cameras replaced three JVC cameras that had been used in the studio for at least eight years. All three GY-HC900s are integrated with the JVC FS-900 camera module, providing PCTI with a fiber-based studio solution. Mounted on Vinten pedestals, each camera is equipped with an LCD monitor as well as zoom and focus controls.

According to Jody Lazarski, one of two instructors for the video production program, the studio is being upgraded based on recommendations from PCTI’s advisory council, which is made up of industry professionals. This year’s upgrades included the JVC cameras and a new studio set, while tape-based recording decks were replaced with Blackmagic Design HyperDeck recorders in 2018. “Over the course of two years, we’ve gradually allocated funds to keep us current in the 21st century,” said Lazarski.

PCTI has approximately 3,700 students across numerous disciplines, including the students enrolled in the video production program through the School of Communication Arts. Mark Cacace, supervisor of instruction for PCTI, said equipment upgrades including the new JVC cameras are essential for creating a professional environment.

“We’re tasked with creating the most realistic work experience for students,” he explained. “Our goal is to get them ready for the next step. We put the equipment to good use, which benefits the entire school community.”

While the cameras are still being used exclusively in the studio, Lazarski is interested in using the GY-HC900’s live streaming capabilities in the future. “I’m very happy with them,” she added. “It was a very simple decision to stick with JVC.”