Despite a litany of injuries, the New York Yankees are off to a blistering start in the first half of the 2019 season. The House That Ruth Built isn’t the only location with impeccable team chemistry and synergy. The creative-services arm of the YES Network has given its on-air promotional graphics package a makeover, implementing the same strategy for both linear and digital platforms.

Although this package was only recently introduced, the project had been in the works for quite some time.

“When I first got here [2½ years ago], I immediately started looking at how to modernize the on-air graphics,” Zeigler says. “We’ve been kicking around the idea for a while, but, from the time we decided to pull the trigger and the time we went on-air, it was less than three months.”

As the assignment gained momentum, Ziegler looked for both internal and external help in the likes of a freelancer and Daniel Guernsey, creative director, on-air promotions, YES Network.

“When we decided directorially what we wanted to do, we worked primarily in-house as well as with freelancer Curt Neumann, [director/designer/producer, Gueststar]. He knew that the way we wanted to communicate with our viewer was to not use traditional bumpers and lower-thirds,” says Ziegler. “[Guernsey] was the primary creative lead on this project as the creative director. I get credit for pushing [this graphics package out], but he gets credit for all of the creative heavy lifting.” 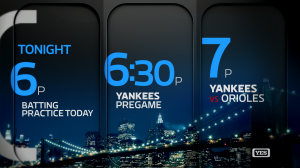 The new graphics package meshes the design for linear and digital platforms.

Before the Yankees hit the field, the creative-services team developed a design that embraces three concepts: the act of framing a shot, the traditional company branding, and likely digital consumption. It’s designed to provide the viewer a seamless digital and linear experience.

“The visual language of the logo was meant to pull you in and [focus on] the story that we’re telling,” says Ziegler. “We [also wanted] to move in and out of that tablet-shaped device, which is also our logo. It [looks] like the phone that you have in your back pocket.”

On the digital side, the package is geared not only for messaging on Twitter but also for other avenues, such as Instagram. To encourage creativity and an outside-the-box mentality, Zeigler and his staff threw out the manual, establishing guidelines instead.

“The package is allowed to be interpreted by the platform [that is] using it,” he explains. “We did not set super-rigid guard rails on this thing. We created a toolkit, and, whether it’s a digital producer building something for IGTV or an Instagram post or [whether] it’s a linear producer, we said, ‘Color within these borders.’ But they have a ton of flexibility inside [the borders] that we set up. We want the package to feel native and belong where it is.” 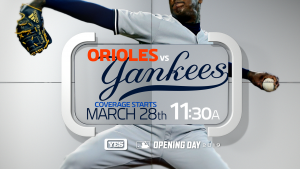 The design encloses important information in a set of brackets.

Constructing a Single Identity
With content dominated by the team in pinstripes, it was only right to start off the program with the Bronx Bombers. More recently, commercials promoting the network’s other programming, such as CenterStage and Homegrown: The Path to Pinstripes, have received the same treatment. There have been discussions about uniting all graphics under one identity in the future, which would further strengthen the cohesion that the network has worked hard to build.

“We want to take the message to wherever our viewers are and want them to understand that [these graphics] are from the YES Network,” Zeigler says. “The [package] embraces the moment that we just captured and the memory you’ll have [while] watching this network.”