Fan engagement was the primary focus of the two-day event 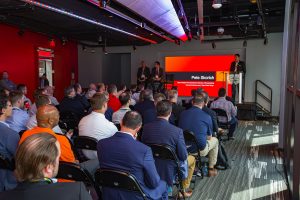 “In 2019, the in-arena show is every bit as complicated as the television product,” said Skorich. “Our control room is as complex as any [production] truck you’ll see in any compound.”

Following the presentation, representatives of the Detroit Lions, Detroit Pistons, and University of Michigan took the stage to share their strategies for engaging fans through in-venue video.

Next on the agenda, attendees were treated to a tour of Little Caesars Arena, making stops in the control room, the gondola area, and the Belfor Training Center. A networking lunch followed.

After lunch, a pair of panel discussions pondered what’s next in venue technology. The first comprised technology leaders from Daktronics, Anthony James Partners, and Van Wagner Sports & Entertainment. The second focused on the systems-integrator perspective, shining a spotlight on Diversified, Alpha Video, and KMH Audio-Video Integration.

Looking toward the future of sports venues, the SVG Venue Summit examined the hottest emerging market in the industry: esports. Leaders from Populous, MES Events, Washington Justice, and Grass Valley discussed the relative merits and drawbacks of building esports-specific venues and hosting esports tournaments in traditional venues and provided a primer on what the sports-venue industry should know about this burgeoning sector.