U.S. Spanish-language rightsholder is pulling out all the stops for semis and final

There’s one week and three important matches left in the 2019 FIFA Women’s World Cup, and the fact that all three will be played in Lyon is giving the production team at Telemundo a chance to shift operations and fully embrace the onsite excitement of the closing stages of the tournament. 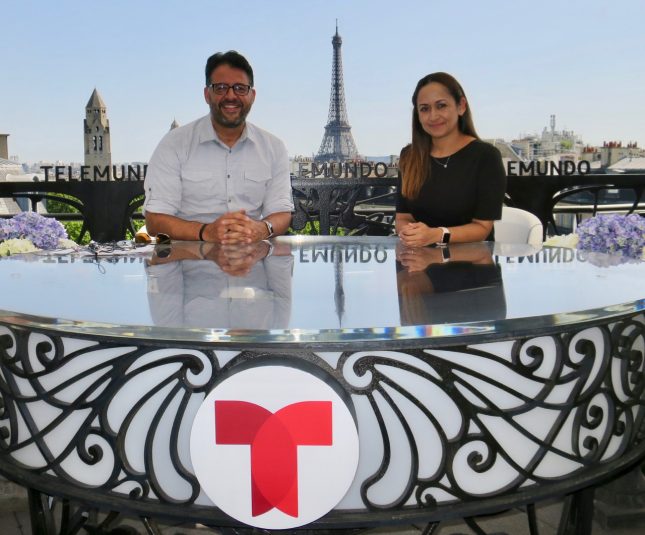 “We are pulling out all the stops for the two semis and final match as it is really convenient for us to do that,” says Eli Valazquez, EVP, sports content, NBCUniversal Telemundo. “We are working to secure a presentation studio inside the stadium right now.”

The move to Lyon from Paris began on June 29 after a one-hour wrap-up show following Sweden’s quarterfinal victory over Germany. Ivel Alfaro, executive producer, Telemundo Deportes, has been overseeing operations on a rooftop in the 17th arrondissement in Paris with great views of both the Eiffel Tower and the Arc de Triomphe.

“We have a small technical area with engineering, lighting, and audio,” she explains. “We have three cameras that are directed and punched from a control room back in Miami. Then, at the IBC here in Paris, we have all the game signals.”

With both the Women’s World Cup and the Copa America in South America occurring simultaneously, it has been an all-hands-on-deck month for the Telemundo team. Approximately 30 crew members have been onsite in France for studio operations; 100 are in Rio de Janeiro, where Copa America operations are based; and an additional 80 are back home at Telemundo’s facility in Miami, coordinating and producing much of the final product from both tournaments.

“We call it a virtuous circle, as the two tournaments have been helping each other,” says Velazquez. “In the morning, we can promote the night coverage, and, then at night, we can promote the day coverage, because we have heavy consumption during the primetime hours. It gives us a chance to push the women’s game and showcase how exciting it has been.”

The rooftop location is above the offices of Actua, a Paris-based production company. Having a production company located in the same building provided some operational benefits (most notably, a very secure location), but it’s the views that have made the difference. Other possible locations included the Trocadéro or a barge on the Seine with a tight shot of the Eiffel Tower behind it. 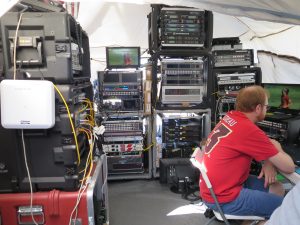 The technical area for Telemundo’s studio show in Paris passes signals to Miami, from where cameras are controlled remotely.

“Our goal was to give credit to this tournament,” says Velazquez, “and then, [given] the impression we left after last summer in Russia, it was incumbent on us to figure out a shot that really captures the country. This has a Parisian feel, and we dressed it up with wood that, when it is lit up at night, seems metallic.”

The outdoor location hasn’t been without its challenges. On the first day, winds in excess of 55 mph whipped around it and damaged the tarp (which was quickly repaired). And then there has been the heat wave gripping Paris and much of Europe with temperatures approaching 100 degrees. The conditions have challenged production teams as well as players and even the fans.

Backup plans, in case of any real issues, would have involved a studio in Miami, but, luckily, those plans have not had to be implemented.

Telemundo, like Fox Sports, has found that the tournament is overdelivering and exceeding ratings expectations on both the digital and the broadcast side. Numbers across the board are up compared with the 2015 tournament, which was played in North America: the round of 16 matches averaged 363,000 viewers across Telemundo, Universo, NBCSN, and on digital outl