Live From 2019 FIFA Women’s World Cup: Kevin Callahan Discusses Evolution of Fox Sports Production Plans and What May Lie Ahead

The 2019 FIFA Women’s World Cup concluded this weekend with a victory by the U.S. team, the second time Fox Sports has been able to deliver coverage of a championship run to viewers back home in the States. Since that first World Cup effort in 2015, the Fox Sports approach to production and operations has evolved. Kevin Callahan, vice president, technical operations, World Cup, Fox Sports, discussed that evolution with SVG’s Ken Kerschbaumer at the IBC in Paris. 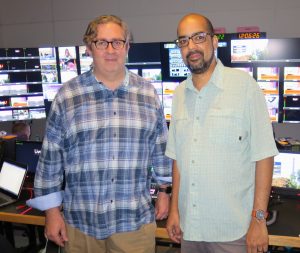 Before you began working on the 2015 World Cup, would you have expected to be where you are today with respect to operations and production?

We’ve definitely progressed on all fronts since 2015. We were very lucky in that our first World Cup was in Canada. In Canada, we knew everyone in terms of all of the players up there, and you can always get stuff in quickly from the U.S. I think, in 2015, we underestimated the size of the project. We allowed delivery dates to be later than we should have, and quite honestly, we didn’t have enough staffing.

I think that we were, from a studio perspective, really buttoned up in 2015, and we have been in the years since. I think that our in-venue presence and our IBC presence have stepped up, and it has really made a difference.

Then, in 2017, because the U.S. men’s team wasn’t in the Confederations Cup in Russia, we kept a lot of people back in Los Angeles, and our studio presence was really a home-run production. We also stepped up things on the media-management front because all of our tape playback and the whole studio show were produced out of Los Angeles. So we need to get all the content back to Los Angeles.

How did things evolve for this year’s World Cup?

This year, we’ve taken what we learned from 2018, and we’re starting to do more production anywhere. I don’t want to call it at-home production or home-run production because we have some aspects of things here in-country that are being controlled in Los Angeles. When you start to dive into it more, it doesn’t even have to be in Los Angeles. It could be any place where we have the connectivity. Right now, Los Angeles makes the most sense for everything because it is still new to us, and that’s where the operators are, but there’s nothing to say that we couldn’t have our graphics operation out of Charlotte[, NC,] and our playback operation out of Los Angeles. It’s really just a convenience factor right now.

Is IP connectivity the key to production anywhere?
We’ve talked about it for years: having IP connectivity, IP bandwidth, is going to change the way that we do television. And it really is now. We’re not the first to do it, but I think that we’ve got into that progression naturally where it makes sense. I think that, if you talk to the production folks, they don’t even realize that they’re not in-country. Everything is seamless, communications is seamless, and that’s the biggest part: getting the communications right.

It seems one of the biggest challenges with production anywhere is that you can do anything, which could make it hard for you to define the project because there are no limits.
Correct, and does someone want to edit from their home in Timbuktu? That’s all possible now, and just trying to get people to understand that [is hard]; they like having rules. They like saying, “Hey, this is a graphics position, and this is what it has.” Now it’s, “What do you want it to have?” We’ve run into that a couple of times. Like you said, I think it really is game-changing. For us, this has been an eye-opening experience in terms of what’s possible, and we’ll start to incorporate it more.

Looking at how you and the team have dealt with the World Cups since 2015, one thing I notice is that you have a long run-up window and then you have to master change management. How do you do that when plans might change?
Again, communication is key in terms of making sure that whatever is going on is communicated to everyone. We’ve rolled with the punches pretty well. When we were planning the Men’s World Cup, we had a U.S. team in it. When you don’t have a