In a night that saw a record 312 home runs — including a whopping 91 from Vladimir Guerrero Jr. alone — ESPN delivered arguably the most dramatic Home Run Derby telecast ever. Whether watching the primary telecast on ESPN or the “Statcast Edition” alternative viewing experience on ESPN2, fans were in for a treat last night. And ESPN’s production team did not disappoint, deploying 4DReplay system, FlyCam aerial system, 3D spray charts of home runs, and more.

“With all the data that is collected now for baseball, we are always looking for better ways to deliver that data to make it more engaging for the fan,” Phil Orlins, senior coordinating producer, MLB, ESPN, said prior to the Home Run Derby. “We really feel that the Derby is a perfect place to highlight a lot of that data. With tools like the [3D spray] home-run charts and 4DReplay, we can give fans a deeper look. For those looking to take an even deeper dive into the analytics, the Statcast [alternative feed] is a perfect place.”

ESPN’s Statcast Edition Back for More at the Derby

“I am so excited about the Statcast show this year: not only are we bringing back the coverage for the Derby, but we also have a unique Baseball Tonight show, which will provide a lot more time to go deeper,” said Orlins. “Unlike when we did the [Statcast Edition] for the Wild Card game, the Derby is very aggressively paced, so they have all this great information, but they don’t have a lot of downtime to get it on-air. That is why having the hour of Statcast Baseball Tonight is great.” 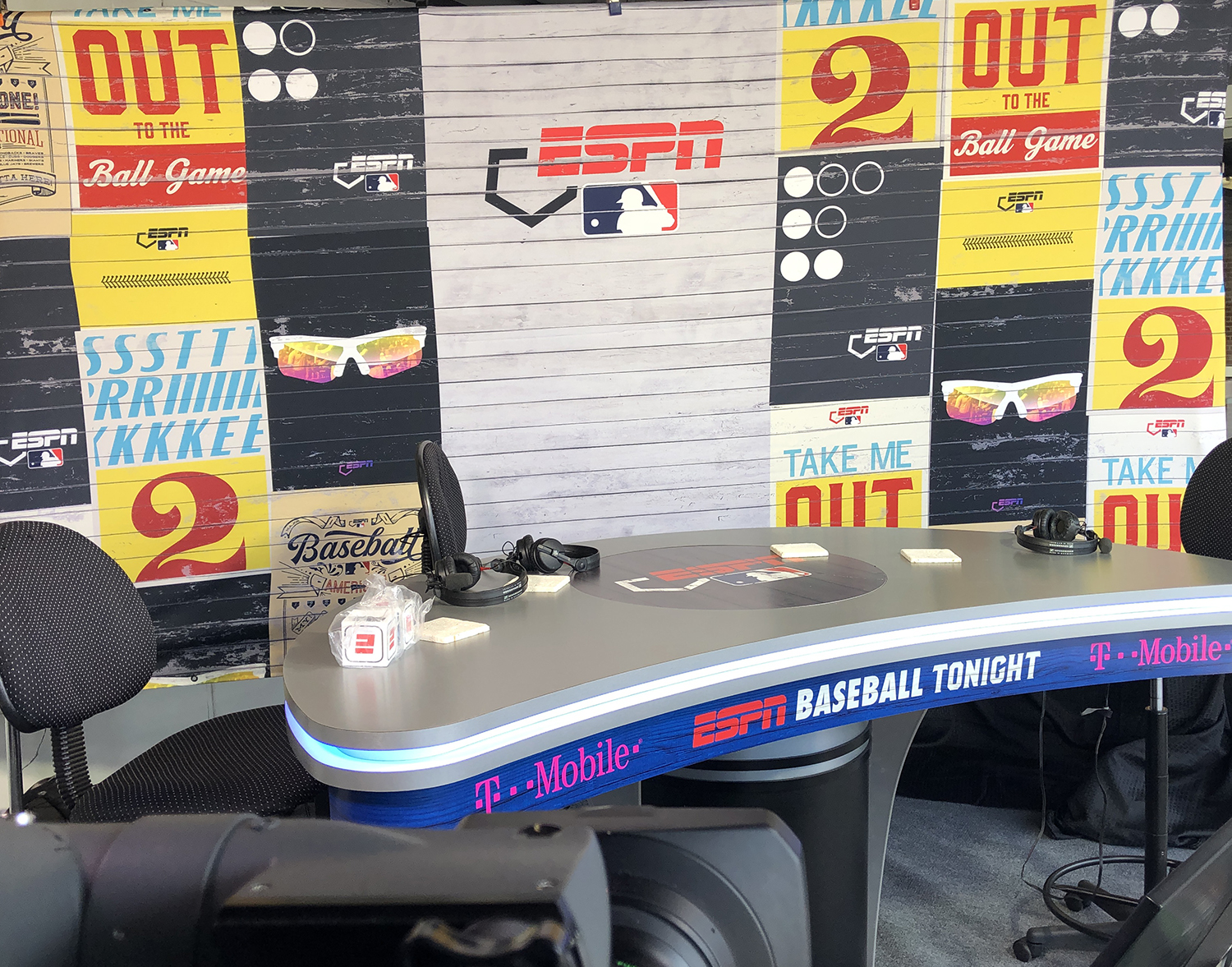 ESPN’s Statcast Edition feed of the HR Derby featured an edition of Baseball Tonight for the first time.

Statcast was produced out of its own truck this year – Harb Productions’ Sophie unit — having shared a control room with Baseball Tonight in ESPN’s main NEP EN1 truck last year. ESPN leveraged its GREMI (graphics–remote-integration] model for the Statcast Edition feed, locating two EVS replay operators and a Vizrt graphics operator at its headquarters in Bristol, CT.

“Since the [Statcast Edition] show expanded a little bit and is gaining in popularity, we thought it best to get a small dedicated truck for that this year,” said ESPN Remote Operations Manager Paul Horrell. “It’s a totally different type of broadcast that runs concurrent to the main broadcast. Our job, from a remote-ops perspective, is to make sure we have enough horsepower to do what they want to do, as well as maintain agility to be able to deal with last-minute changes that come up with a unique show like this.” 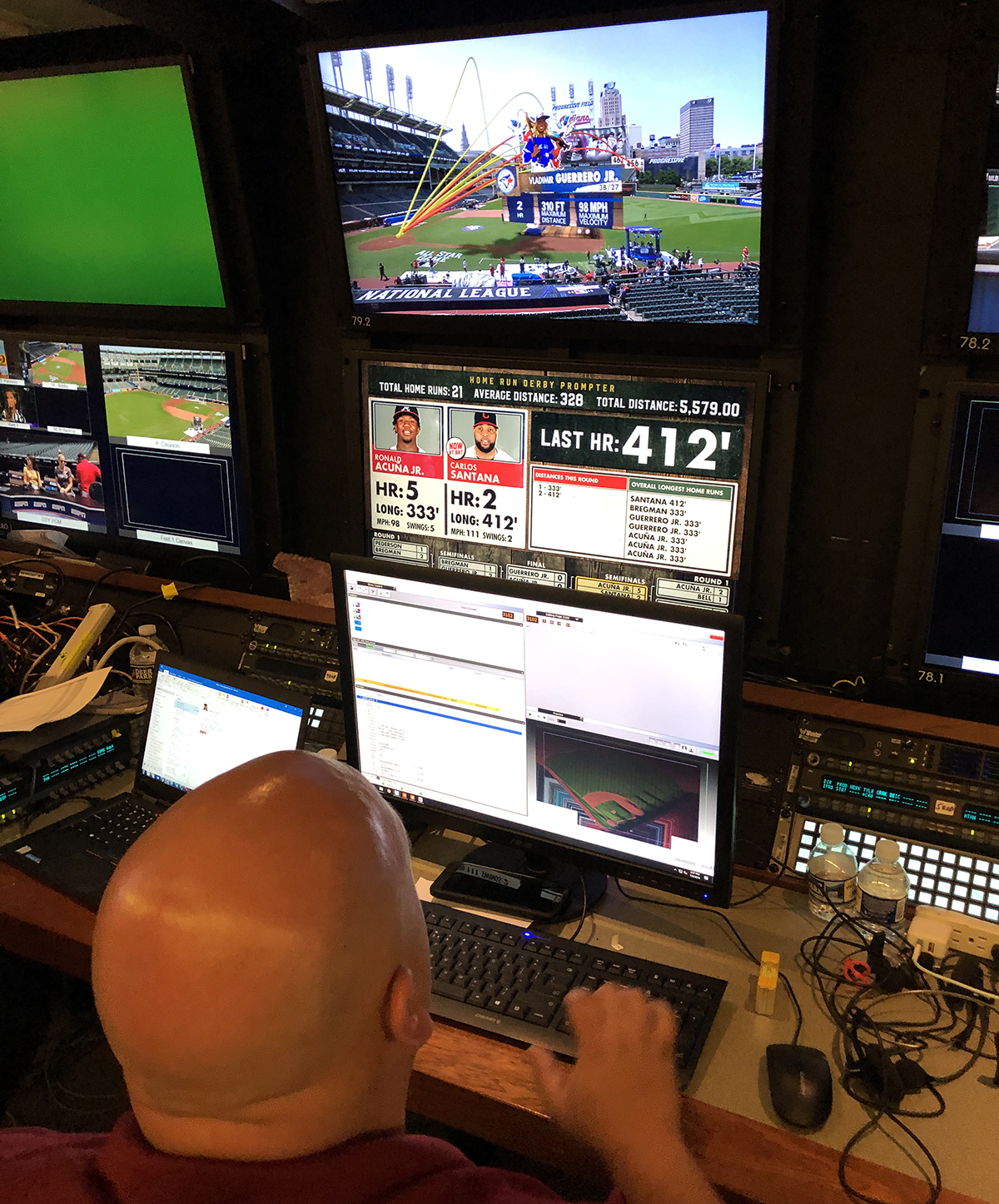 ESPN created custom animations for each player as part of the 3D spray charts at HR Derby.

ESPN’s Production Enhancements department also launched a brand-new system to create 3D home-run spray charts for each player’s round. The system was available on the mid-first camera and featured cartoon-like player graphics followed by AR graphics showing the path of each home run hit in a single round (red lines representing homers of more than 440 ft.).

After debuting the 4DReplay system on last year’s Derby, ESPN leaned in to the system this year, airing 4DReplay packages after almost every single competitor in last night’s Derby.

The 4DReplay system relies on 60 4K cameras mounted on the concourse level behind home plate and stretching from first to third base. 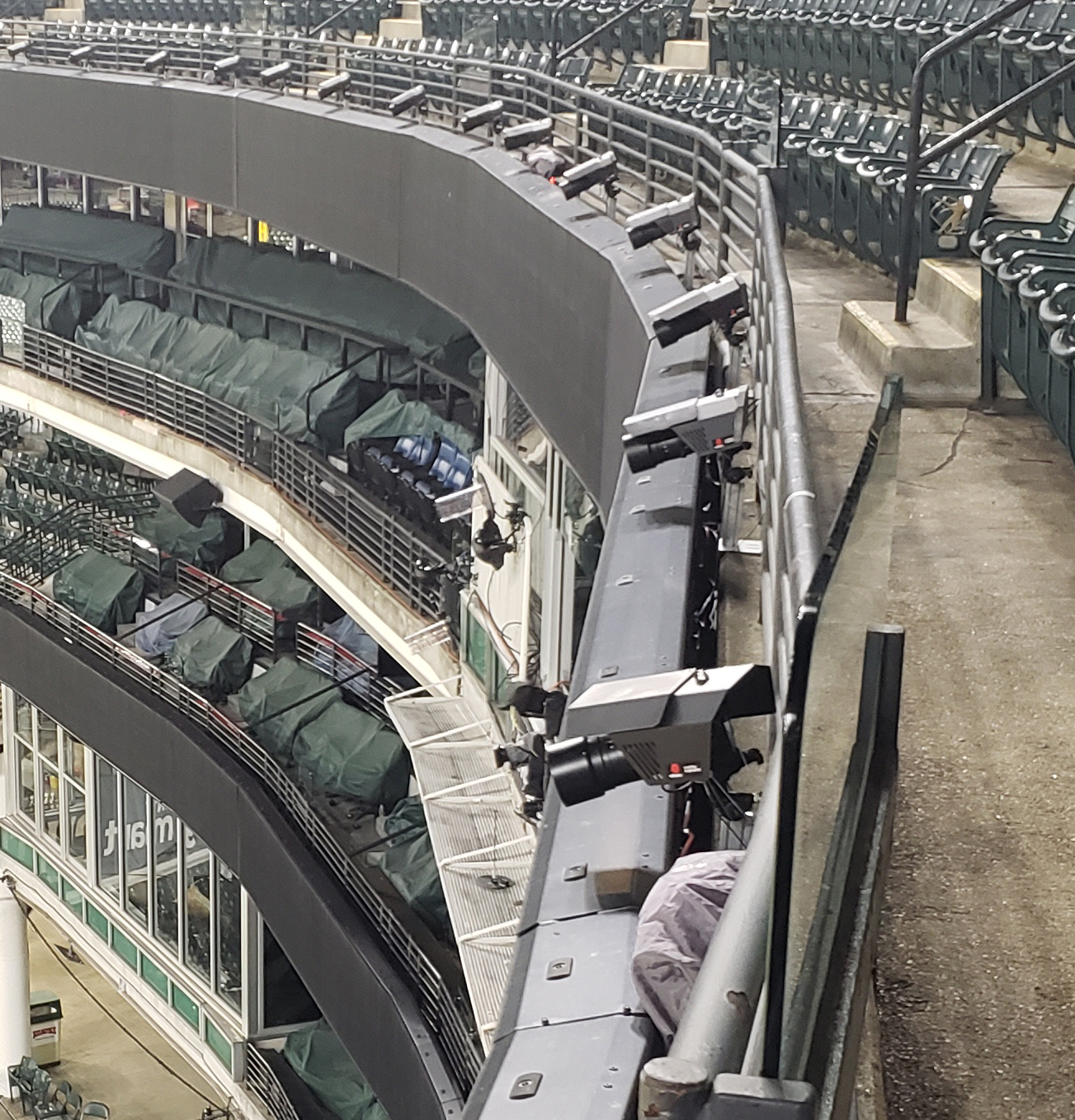 The 4DReplay system at Progressive Field relies on 60 4K cameras tied together.

The cameras are tied together, and, for each play, the single operator selects the pivot point on which the camera axis turns. The operator can manipulate the replay from side to side and can zoom in without losing resolution (thanks to 4K). Since 4DReplay simply stitches together 60 camera feeds and does not have to virtually create filler frames, no rendering is required, allowing clips to be ready in under 10 seconds and sent on to the ESPN EVS replay room in the truck.

“It’s really exciting because they can turn a replay around for you in 10 seconds, but there are [editorial] challenges, too,” Orlins explained. “When you do normal replays, all you have to decide is whether or not to use that shot. With [4DReplay], there are almost infinite choices in terms of what you can do with a replay. Are they picking the right thing to execute in terms of what your talent wants to talk about? That’s the challenge.” 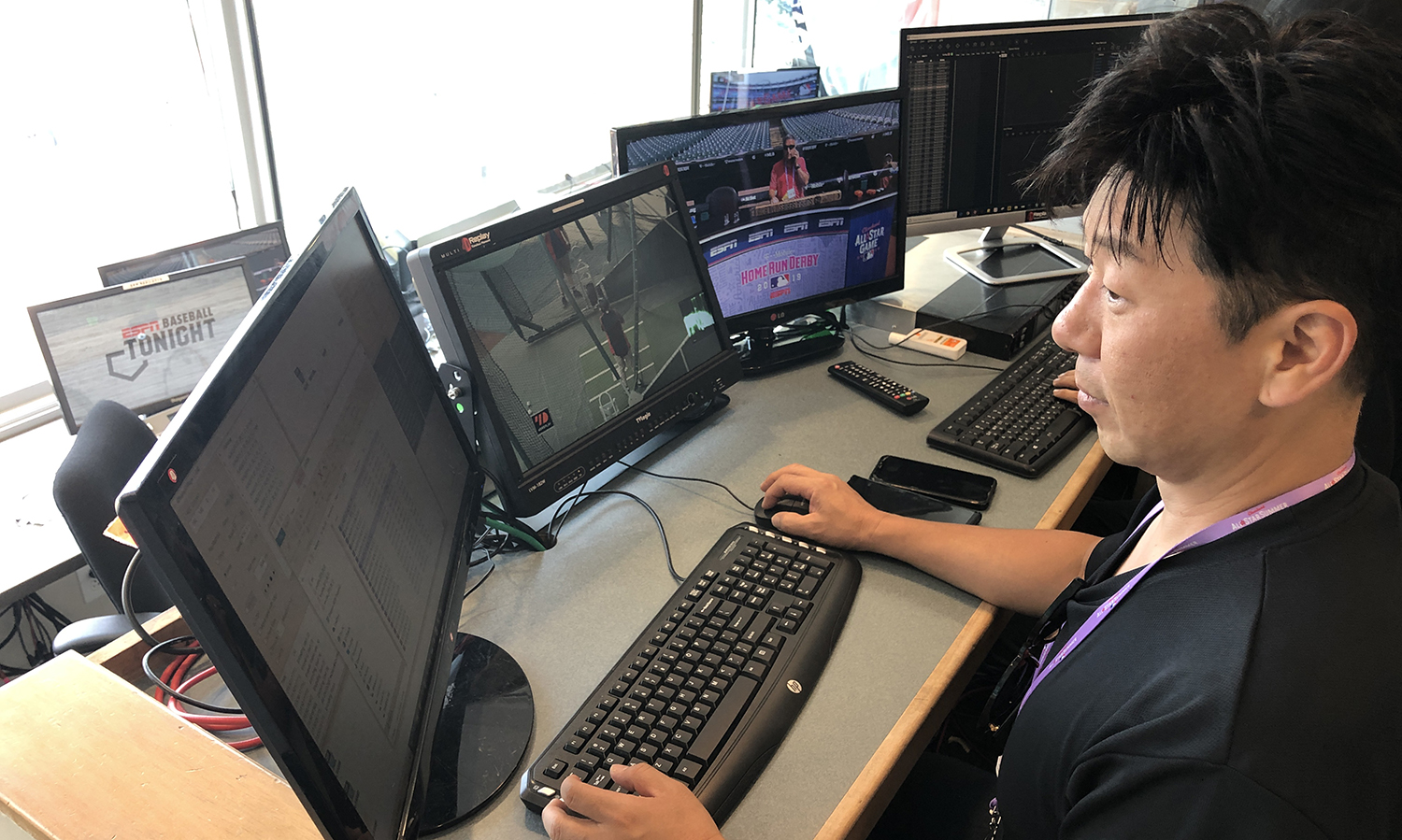 Inside the 4DReplay operator booth at Progressive Field.

In addition, Perez was provided the 4DReplay tablet app for the Statcast Edition production, allowing him to control the replay system himself.

“That takes longer to turn around,” said Orlins, “but it gives Eduardo the choice: he can choose where to start it, where to stop it, where to zoom, where to spin, go up and go to the side. It’s important to put these tools in the hands of the talent because they know best.”

Orlins noted that ESPN is continuing to enhance its partnership with 4DReplay. Having been deployed at the Derby and last month’s College World Series, it will be used at the Little League World Series and on the five upcoming MLB games, including Sunday-night games at Fenway Park on July 14 (Dodgers-Red Sox) and July 28 (Yankees-Red Sox).

In all, ESPN will deploy more than 30 cameras for its various productions at Progressive Field, including a FlyCam point-to-point aerial system along the third-base line and into left field. 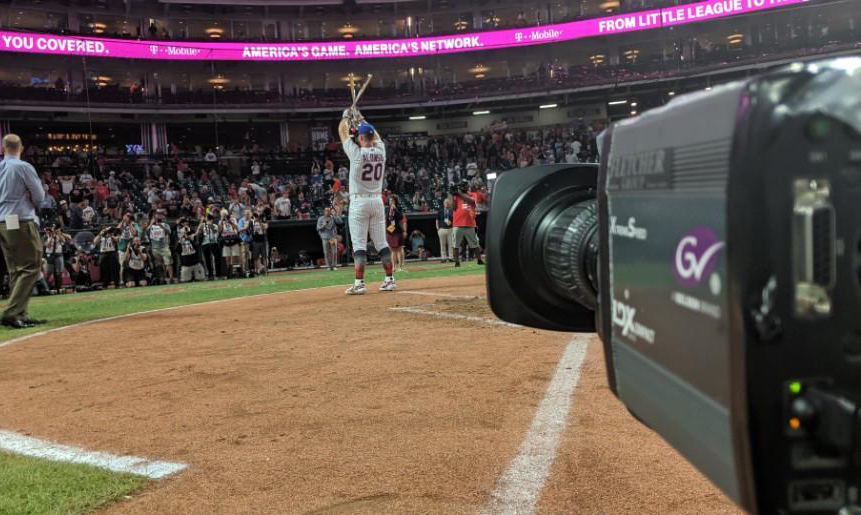 “The cool thing about the FlyCam is, the shot starts outside the ballpark and brings all the fans into the stadium, and then you get that dramatic shot coming in from the outfield,” said Kevin Cleary, project manager, ESPN. “It’s a unique shot, and it’s our first year using it, so I think our [production team] is very excited about it.”

Also on hand was an RF camera attached to a golf cart (provided by CP Communications and Inertia Unlimited) that conveyed players from the batting cages to home plate, as well as seven robos from Fletcher (including two 6X-slo-mo Grass Valley LDX 86’s and one I-Movix Phantom 4K) and four RF cameras from CP Communications (three handhelds and one Steadicam).

NEP’s EN1 on Hand; Statcast Edition Gets Its Own Truck
Inside the compound, NEP’s EN1 fleet of trucks (A, B, C, D, and an E equipment hauler) was once again home to ESPN’s Derby production. Three separate control rooms are serving ESPN’s cavalcade of productions in Cleveland: one for the Derby and the Celebrity Softball Game (taped on Sunday and aired on Friday night), one for onsite editions of Baseball Tonight and SportsCenter, and third dedicated to ESPN Deportes’ coverage of the Derby and the All-Star Game tonight. 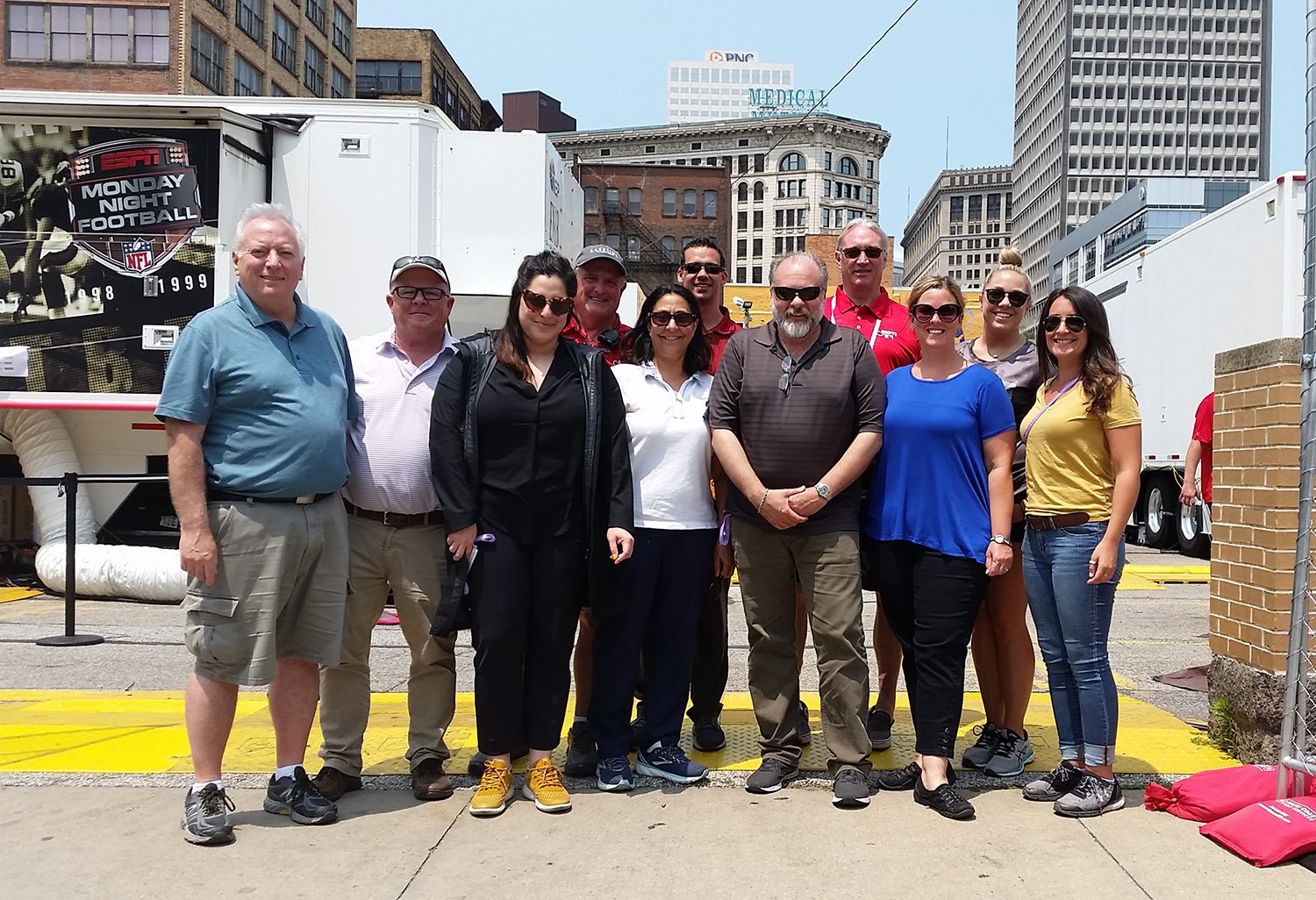 “This is such a large event,” said Horrell. “We have eight different operations personnel on this game to cover all the different aspects from Celebrity Game to Home Run Derby to Baseball Tonight and SportsCenter, to Statcast Edition and then some social and digital content as well. It’s really [our] only event that is this massive and multifaceted with so many different productions onsite. There’s only so much equipment and only so much production space, so it all has to be logistically intertwined and shared.”

In terms of transmission, ESPN has 12 TX fiber paths to Bristol and four return paths to serve the REMNAS (remote near-access storage) file-transfer system on the truck and deliver various program feeds. In addition, ESPN has a backup IP transmission link and a satellite uplink provided by Arctek. 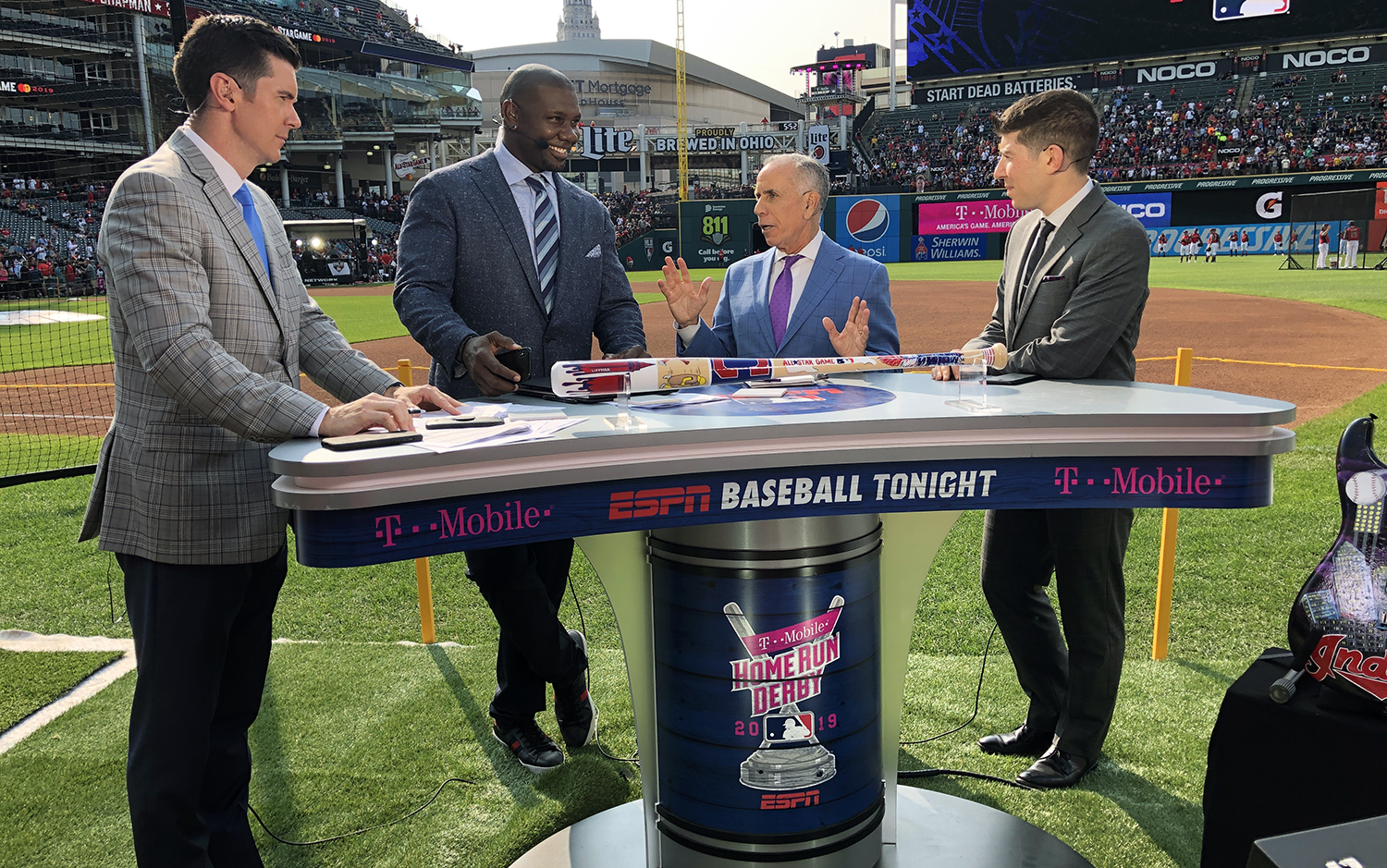 “On the transmission side,” said Horrell, “it’s all fiber for our primary transmission. We have IP backup for the main Home Run Derby, and we also specifically added a satellite truck this year as a backup because we felt that was the most reliable in order to ensure redundancy for a big event like this. The thinking behind that is, we’ve used IP backup with great success in the past, and we use it on Sunday, Monday, and Wednesday Night Baseball throughout the year. But, for an event this size, we felt we should go with a backup that is completely reliable, so we went with a satellite uplink.” 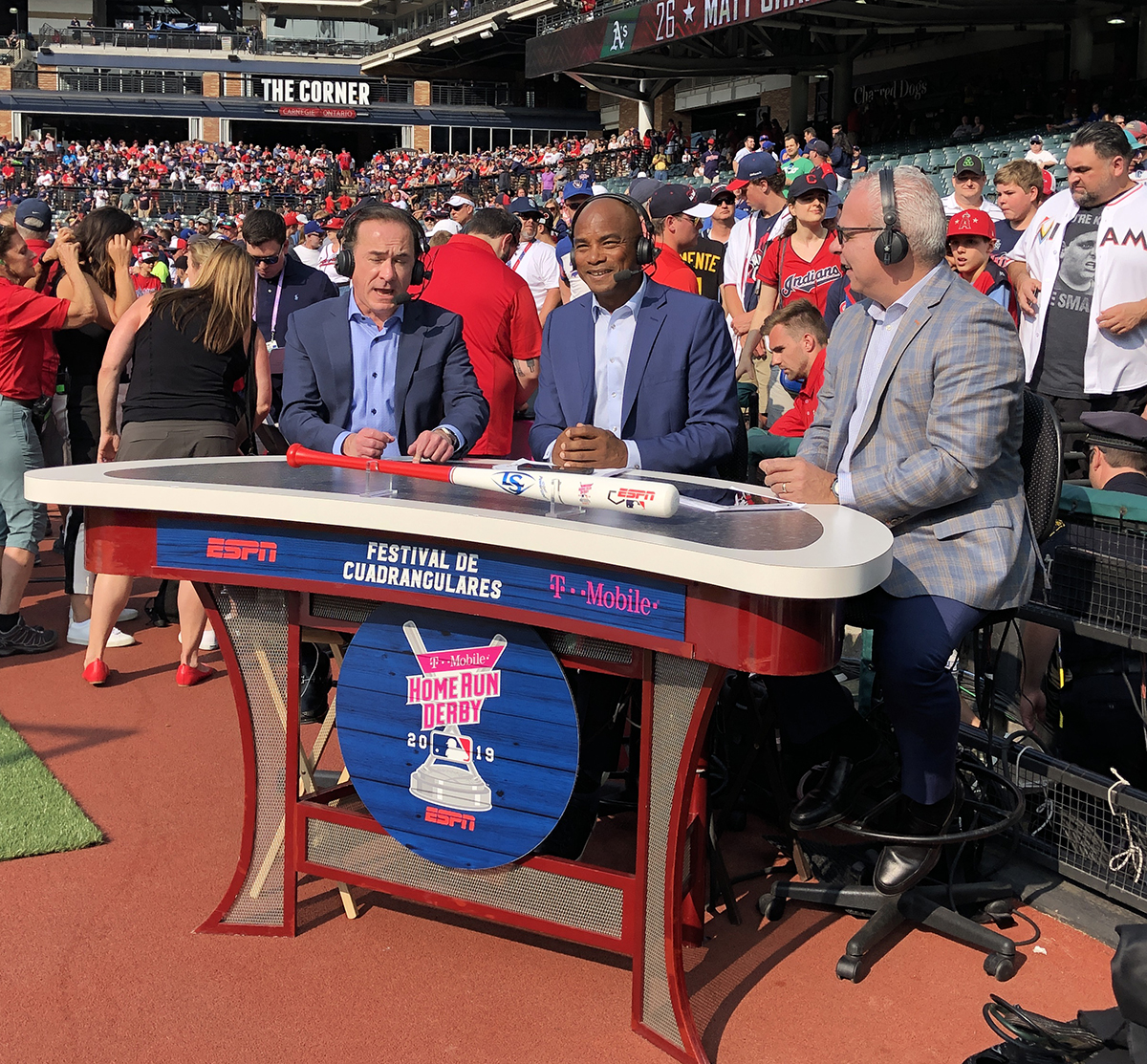 It has been a busy baseball season for ESPN, which is coming off live remotes in London and at the College World Series and another coming up at the Little League World Series — making preparations for All-Star Week that much more complicated.

“We’ve had our busiest season ever on the MLB side,” noted Horrell, “and Project Managers Cindy Pennington and Kevin Cleary have been amazing in terms of overseeing the Derby and everything here. It’s extremely helpful to have a project manager specifically dedicated to the intricacies of this show, which is very complex, while I am focusing on the overall season. They’ve been tremendous.”