Live From Wimbledon: ESPN’s Jamie Reynolds on the Challenges in Broadcasting a Grand Slam

The two finals at Wimbledon are shaping up to be epic battles between arguably the biggest names in the sport. That is just fine with Jamie Reynolds, VP, production, ESPN, and nearly everyone else in the Wimbledon Broadcast Centre, portending great interest and ratings. Reynolds took a few minutes out of his schedule to speak with SVG Editorial Director Ken Kerschbaumer about this year’s tournament, the current season, the challenge of broadcasting a Tennis Grand Slam event, and what lies ahead for the ESPN team as it gears up for the US Open in August. 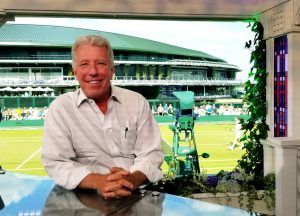 ESPN’s Jamie Reynolds: “You need the time and the commitment to figure out the subtle nuances that would change the coverage. That requires investment of time, energy, and resources.”

How have things been going here at Wimbledon for you and the team?
It’s great. We got 175 people here, and it’s one of those events where you bring people across from the U.S. and you tell them it’s like 14 days in a submarine. We go down on day one, we resurface in 14 days; we’re going offshore, you’re living with everybody 10-15 hours a day. You’ve got to know how to line up with each other, recognize the creative disparity, possible tension, harmonize with ideas, and just kind of keep the whole click-clack running with everybody. That’s the best thing.

It’s always great to use this chance to recap the season so far. Starting from the Australian Open, how have things gone?
The whole tennis year continues to evolve at a very rapid pace. Tennis Australia has done a really nice job with that venue, and, [with] what they’ve rolled out in their long-term plan, it’s clear they’ve invested in this category, in this sport. What they’re doing with Melbourne Park, what they’re turning that whole venue into, and what they’ve done with the satellite tour around it, you just know there’s a lot of energy, and there’s an investment. So that’s a good sign.

As a broadcaster, we’re still trying to figure out, with that event, how can we balance our investment onsite versus the rapidly emerging technology that they’re offering to their customers. But, in that, how do you differentiate? What’s still unique between ESPN, BBC, Wowow, any other onsite broadcaster? What access, what discovery can we still harvest and turn into neat content that doesn’t necessarily look and feel like what’s being distributed? Then we have to find that balance for it, right? How they manage the event, how they’re efficient with it, but what’s still accessible that’s unique and fresh, other than just the talent roster?

How do you find that balance? What’s the tension there? Is it just because there are only so many access points to the players or interviews?
I think it’s kind of that three-dimensional chessboard of lining up player access and not being so invasive, establishing some level of priority between broadcasters. You can’t have everybody running around the venue at once looking out for the same athletes or the same courts. So you have to manage that. There’s a safety issue in terms of that access at the end of the day. And then you have to figure out what the different brand identity might be and how do you land all of these converging interests so everybody gets a piece that’s unique to them and that they can say, “This is why we’re a little better than the others.”

Is that a challenge for all the Slams?
It’s interesting because all four have differences and different types of business models. Australia is heavily backed by the state. The French have their own unique operation. This is a private club at Wimbledon. USTA is a different organization [whose] mission statement is to promote the message of tennis. They all have very different financial drivers, business models, the way that they are stewards of the support and the event. So the dynamics might be slightly different in each one of those venues.

You start with a competition at the base level, and you know you’re trying to service the brand and get it out to the world, so there’s a great deal of priority [on] that base level. You have the ATP influence, you have the WTA influence, you have the players’ access points. Has it reached the saturation point? Yes. It’s probably overcorrected a little bit to be very, perhaps, measured in how much access players are responsible for giving to keep an event going. And that is so they can still stay competitive and stay on their regular schedule. But now that there’s so much time available and so many courts being covered and so many hours devoted to coverage that the players are becoming a finite resource.

With so much on-court coverage, is it a challenge finding time for things like player features?
If there are 18 courts offered here and play begins at 11 and they’ll go through the end of the order of play per day, there’s an incredible volume of live action. That’s great because everybody has figured out how that ought to get out to the fan base.

But now you have to add that new layer of what’s accessible, gratifying, meeting the fan expectations of access and discovery of the players. What can you get other than just press-conference sound? What kind of personality element can you continue to deliver that’s at the same scale as the 18 courts for 10 hours a day? And then you’re fighting the clock because, every second day, the field is cut in half. Now they start dwindling. How do you manage putting all of those ingredients together?

Having just been to the Women’s World Cup, you see the way FIFA manages those things with ENG crews dedicated to each team and doing interviews and features. As a rightsholder, you can just grab those elements. But then you come here, and there are hundreds of players who can provide those elements.
100% correct. You take the functionality of a central content store delivered by host broadcasting. Brilliant, satisfies everybody, it’s on-demand or accessible in a timeless capacity, and any broadcaster could jump in, sift through it, pull the content they want. Selfishly, [because] it’s exactly the same content available to all, what’s going to differentiate our coverage?

The second layer of that is that you have two other things. This is the only combined event, when you think about it on a global scale, where you have the entire men’s field and the entire ladies’ field; you have the ATP, and you have WTA. They have different [ways to] promote their players and what kind of content they uniquely supply.

[Looking] at the field, you’ve got 128 men, you’ve got 128 ladies, 256 athletes total, 256 teams. How do you start investing wisely as a network that you handicap and go after the right stories for the first round, second round, third round? Or if you miss a bet and you lose Venus [Williams] on the first round, you lose Maria [Sharapova] in the second round — oh my gosh! Did we invest properly prior to coming to the event? Or do we have to now half-step back, go to the content store? But now you’re working with the same media, same materials, same storylines that are effectively, editorially controlled by what the event is offering to their partners.

There’s no easy solution.
The event organizers are trying to protect the athletes and not put too much of a demand on them because they want the best contest. Same with ATP and WTA. They want to create a bit of a [manageable] frequency of access to [their players]. You’ve got to deal with that. But we also have to put more than 10 hours of unique television on. And, this week, we have two networks, ESPN1 and ESPN2, so you’ve got to do eight-10 hours and have a different experience on both networks. The volume increases, but the content is slightly restricted.

Here at Wimbledon this year, what have been the top storylines?
There are two personalities that evolved last week. You had Coco Gauff on the one hand that was a fresh face, dynamic story: a young girl who just took hold of the tournament and captured everybody’s attention. And then you have this whole other side of the equation, the very polarizing personality in Nick Kyrgios. And all of a sudden, he becomes [a big story].

You have these two individuals that were kind of cutting across the grain for very different reasons. When you juxtapose that dynamic, how do those voices, those personalities rise above the 256 players that are out on court? It’s very interesting. You had this young girl, and you had this kind of bad boy of tennis that’s probably still electrifying the crowd. Love him or hate him, people can’t take their eyes off him. Then it becomes a very fresh debate. Is he good for tennis? Is he bad for tennis? Making no judgment on it one way or the other, people are talking about it. People are crafting show formats around him. It was very interesting Monday through Friday, looking at those two characters.

When it comes to court coverage, you can fit only so many cameras. What’s missing? Better audio? More replay? More 4K zoom?
That’s a great question. I think it’s changing the approach to coverage, not necessarily enhancement of the assets you have. For a long time, we’ve talked about, do we need to be lower? Is there another way to convey the speed and the strength of what each stroke represents within the telecast? Again, in that high Camera 1 position, you understand strategically, but you don’t get a sense of the intimacy of what it’s like to hear the ball on a racket, hear the speed of the ball, and just get the physicality. And so, we are constantly trying to improve that sensation and capture that element.

I’d love to just set up a multicamera shoot in a stadium for a week, redeploy the cameras every day, get people out there for eight hours a day, and play with a completely different strategy coverage and see what resonates. Because we’ve all got to admit to the traditional, again, because of the thriftiness and the efficiency model of the telecast, we tend to go back to the same ingredients that we’ve historically done. But you need the time and the commitment to try to figure out the subtle nuances that would change the game, change the coverage. That requires investment of time, energy, and resources to figure out how you could actually change the experience.

In a way, you need to walk into that situation without any preconceived notions of “This is Camera 1.” But that isn’t easy.
I love you for saying that, because the reality is also that we’ve all talked about it but we’ve never done anything about it. When we went to 16:9 and we’re sitting on a sport with Camera 1 that still only goes top to bottom, we’re not taking advantage of the screen space the way we ought to. How do you take advantage of that? And is there a way?

Right, because you would think that, if you started from scratch today with a wider screen, you might have started from a different place in terms of camera positions.
Correct. Is the slash position more attractive, and can it help you convey more speed? Can you really get a Camera 1 and just get right-to-left action, like every other stadium in America or in the world? We’re the only sport that goes top to bottom, when you think about it.