Tech advances, pregame shows, top-quality video are all to boost the home team

In-venue production teams face the challenges of managing the expectations not only of fans of but also of coaches, athletes, management, and ownership. At the 2019 SVG Venue Summit, held last month at Detroit’s Little Caesars Arena, game-presentation leaders from the Lions, Pistons, and University of Michigan took the stage to offer video-production tips, discuss the technology, and explain how they leverage video to engage with their fans game after game. And top of mind for all? Helping out the home team. 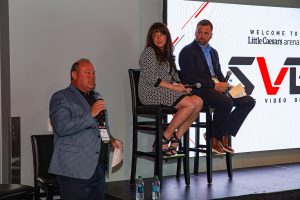 “The first priority is homecourt advantage and working with the team, not against it,” said Diane Ferranti, VP, programming, production, broadcasting and game operations, Detroit Pistons. “If the visiting team is inbounding, we want to make it noisy and have the fans stand up. But, if our coach is trying to call a play, we want nothing going on.”

Kurt Wisenbaugh, director, game presentation and fan experience, University of Michigan, highlighted the need not only to push forward with technology but also to stay tied to traditions and, potentially, create new ones. For 140 years, the school’s football team has taken to the field in a stadium that has no sponsors, no pyrotechnics, no fancy lights, not even a mascot.

“Fans come for the tradition and pageantry,” he said, “and we fill the stadium well before the game starts. We take what we have and make small improvements to bring the fans closer to the action. One thing is, we have the best Steadicam operator in the country for the band show and when the team comes out.”

When Jim Harbaugh was hired to coach the team, he came in with a new vision for the team’s pregame entrance video. He wanted a scripted package that was about 2½ minutes long and managed to bring in James Earl Jones to give a legendary voice to the script for a legendary collegiate program.

“Usually, you want to change up the intro video every year, but, when that video ran for the first time in 2015, the fans loved it, so we used it a second year,” said Wisenbaugh. “Now the fans want us to keep running it, and it’s a tradition where the students chant along with the narration. It fits with the traditions, and the fans love it.” 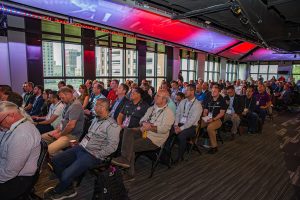 The video does evolve. Harbaugh’s vision included highlighting moments of pride for the university and the Ann Arbor community. “He wanted to see certain people,” said Wisenbaugh, “so we will switch out clips during the year to make sure others outside of the video are part of the equation.”

Ferranti noted that the in-venue experience evolves not only on a seasonal and event basis but even on a day-by-day basis. Friday-night crowds skew more adult, whereas Sunday crowds have more families and children. Therefore, each show has a different feel and theme, which is increasingly akin to live theater with dancers, mascots, and musicians.

“The lower bowl is now programmed for live theater,” she observed. That means that everything — from lighting to the LED ribbons and boards and the video elements — are driven from the production switcher in the control room.

“That allows everything to work in sync,” Ferranti added. “And we have a team and crew that has worked together for so long that there is a synergy so that we can make the most of all the bells and whistles.”

Bryan Bender, director, event presentation, Detroit Lions, discussed Ford Field’s $25 million upgrade two years ago, which was pulled together by Alpha Video, WJHW, Daktronics, and Parsons on the audio front. The efforts solved previous sightline issues and also gives an in-venue production team a broader canvas to serve fans who arrive at the stadium early. The stadium opens at 11 a.m., and a “power hour” from 11 to noon offers a different giveaway for each game, cheerleaders throughout the building, alumni legends, and live music. The video team does a number of live shots from different places around the building as well as from a stage where interviews can be conducted.

“And key alongside all the entertainment,” said Bender, “are $2 hot dogs and $5 beers.” 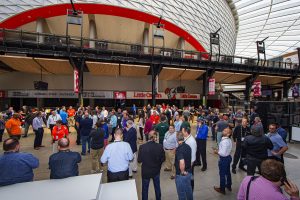 Attendees at the 2019 SVG Venue Summit were offered a tour of Little Caesars Arena in Detroit.

The University of Michigan video department has much more on its plate than just football. The production team covers 15 sports in eight venues that have videoboards. All the events are produced from A production studio in the basketball arena, and soccer, field hockey, baseball, and softball productions are produced remotely from the venues.

“Our resources are thin, but we do what we can do,” said Wisenbaugh. “We can do three or four events a day over a weekend, and, when we have something like a hockey game right after a football game, we’ll hope there is no overtime, so we can get the cameras to the hockey game. Or we can pull one or two cameras to get them to a different arena.”

Ferranti and the rest of the Pistons team are looking forward to a new production facility that will open at the team’s practice facility 2 miles from Little Caesars Arena.

“It will have a mini control room as well as a broadcast studio with open windows, so it will be like the Today show,” she explained. “We will also have an Evertz DreamCatcher and ChyronHego [system] there so we can build things there. But it will be interesting to see how we work both sides of having two buildings and how things come together.”