Teams onsite and in the U.S. produce coverage for Golf Channel, NBC stations

In the fourth year that NBC Sports has provided coverage of the 148th Open Championship to U.S. golf fans, 350 people on hand in the small seaside town of Portrush, Northern Ireland, and production teams in Stamford, CT, and Orlando delivered the coverage via Golf Channel as well as NBC stations across the country. 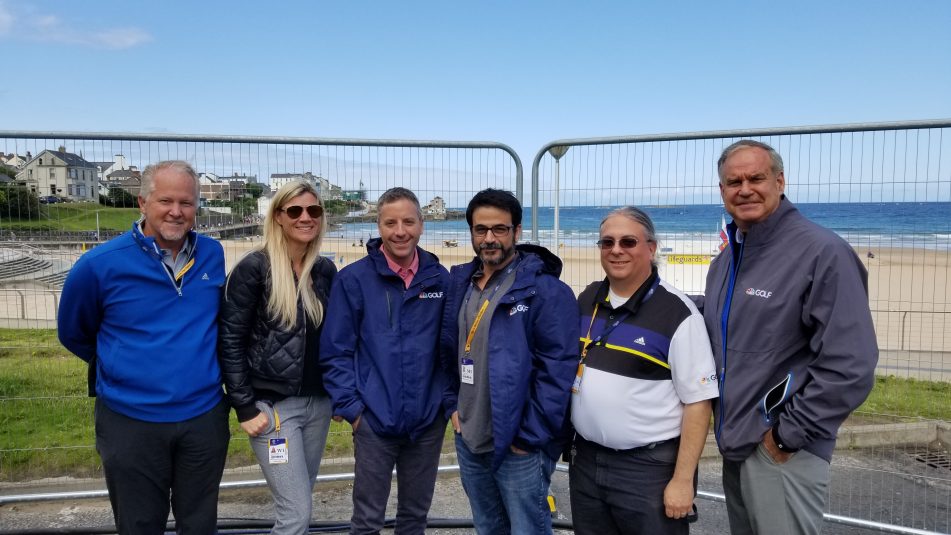 Ryan Soucy, VP, golf operations, NBC Sports, says operations are similar to last year’s with some slight workflow improvements, such as a unilateral RF Toptracer and use of a LiveU camera to capture beauty shots around town.

“We’re working closely with CTV OB and working a little more closely with Sky Sports to do a couple of things differently, and it has worked out great.”

NBC has deployed 49 unilateral cameras around the course, according to Keith Kice, technical manager, NBC Sports. The production team also takes 63 camera signals from the European Tour Productions (ETP) team, which is producing the world feed.

“We also have four super-slo-mo cameras and our own RF tracer,” he explains. “And new this year is the use of a LiveU camera to show scenery around the town, and it has been great to show the beauty of the area.”

Once again, the NBC golf-production team works in a massive tented structure built by Tall Order Structures. The larger space provided by the cabin allows a larger monitor wall than can be used in a production truck. Next door to the expanded production gallery is a replay area with EVS servers, and the third room in the cabin is the main audio-mix area.

The NBC golf team continues to rely heavily on the proprietary NEWBERT remote flypack, which allows engineering and production staffers at the Golf Channel operations center in Orlando to work remotely from there. Golf Channel’s Live From The Open talent and camera crew calls a studio along the 18th fairway home during The Open. But the front-bench team, ChyronHego and Vizrt graphics operators, the A1 audio mixer, and EVS operators are all back in Orlando, operating from a control room where they have access to 13 cameras and other sources via integrated tally and router control. A Lawo audio frame is also part of the package onsite, helping create a local mix, and DNF Controls provides GPI transport between The Open and Orlando. In addition, the system allows frame conversion of 50-fps signals to 59.94-fps to take place in Orlando, with less equipment needing to be rented for the coverage. Libero graphics for analysis are being completed in the States.

Craig Bernstein, senior director, technical operations and engineering, NBC Sports, says that the team is building off the success of last year and, once again, the transmission kit is also being used.

“Operations are similar to last year, but we have more sources available to Golf Channel in Orlando,” he says. “They keep pushing the capacity of what we can do with the kit, and it keeps evolving as their needs grow. We have more IP gateways this year, so we can get more sources and signals back to Orlando.”

Soucy says Tommy Roy, lead golf producer, NBC Sports, came up with the idea to rely on LiveU to get live shots from around the area and places like the wide beaches and Dunluce Castle.

“It’s not new technology,” says Soucy, “but it has worked out great, Tommy loves it, and it’s been a good addition.” 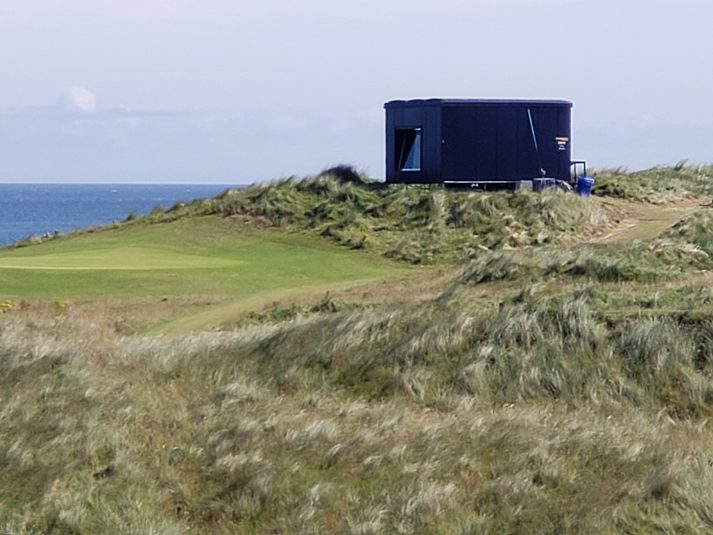 The set location for announcer Mike Tirico offers dramatic views of the Atlantic Ocean and Portrush.

This was the first time the NBC golf team called Royal Portrush Golf Course home for an event, so there were three site visits to sort out studio locations, camera locations, and compound logistics. The first visit was after last year’s Open in Carnoustie, Scotland and was followed by a second visit in December and a third in May. When all was said and done, camera locations and studio locations were locked down, including a studio for NBC Sports broadcaster Mike Tirico that has two windows offering dramatic views of the Atlantic Ocean and the town of Portrush.

One thing all of the entities located in the broadcast compound have appreciated is having a compound that is on a paved car park that is usually where locals park their cars for visiting the beach.

“Anytime you can be on flat ground, it helps out tremendously,” says Soucy. “[ETP Senior Technical Producer] Stuart Cook and his team did an unbelievable job with access in and out of the compound.”

Also helping out is that the NBC team, CTV, and ETP are completely on the same page after four years of working together (this year’s Open marks the fifth time they have worked closely, including last year’s Ryder Cup in France).

“It’s getting to be so smooth,” says Kice. “By the time I got here, a lot of the rooms were built, the monitor walls were done, and it has been great working with CTV. They’re like family.”