Industrial Media and its Emmy-winning television production company, The Intellectual Property Corporation (IPC), are adding a new production hub in New York City. It is the first step in the company’s goal of collaborating remotely with directors, producers, and editors throughout the country. “Up until this point, our editors worked 98 percent of the time on-site in Los Angeles and Atlanta,” states Eric Towler, IPC’s Vice President of Post Production. “The ability to treat somebody who works 3,000 miles away as though they’re just down the hall is very appealing. We’re getting into that with Avid. It will be a huge advantage to be able to work wherever we find talented editors, filmmakers, and story producers.” 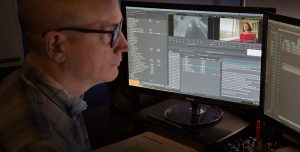 In the three years since it opened its doors, IPC has produced a range of content for networks, cable companies, SVOD, and digital platforms, including Netflix, Amazon, A&E, Showtime, and Oxygen. Under the management of co-founders, Eli Holzman and Aaron Saidman, the company produced the critically acclaimed shows, Leah Remini: Scientology and the Aftermath and Active Shooter.

The concept of being able to utilize shared storage virtually anywhere we find a talented editor who needs to work from wherever they are located is very exciting. We know we’re going in a great direction and Avid is a huge, huge part of the confidence we have in these decisions.

“We like to think of ourselves as documentarians of real human stories and we work with whatever networks or platforms want to tell those stories with us,” explains Towler. Towler along with Spencer Wolf, IPC’s Director of Post Production, currently oversee postproduction of 42 shows for Industrial Media, including series presentations, pilots, and pitches. They build and maintain the post-production infrastructure which allows the team to focus on the quality of the content, supporting Industrial Media’s mission to tell stories with integrity.