Live From X Games Minneapolis: How Tracking and AR Could Change the Future of Action Sports

In this era of data, live tracking — be it chip- or radar-based — has already become common in many of the biggest U.S. sports leagues. The NBA and NHL are rolling out player- and ball/puck-tracking systems, and Major League Baseball is already well-seasoned in its efforts with Statcast. And action sports may not be far behind.

At this weekend’s X Games in Minneapolis, ESPN and production partner Echo Entertainment are experimenting with sensor-based tracking of selected bike and skateboard events to begin gathering data ranging from speed and height to lengths of grinds. 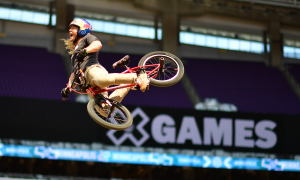 Partnering with motion- and data-tracking specialist Kinexon, ESPN and Echo Entertainment will place sensors on various athletes and their equipment to gather real-time data.

The production team will place small transponders on the athletes themselves or on their bike or board during Moto High Air and Skateboard Street events. Surrounding the courses are 25 access points (10-12 each course) that can receive and deliver data to the broadcast truck in real time.

“No one has really done this,” Tim Reed, VP, X Games, ESPN, explains. “From the skateboard and street side, it’s just about trying to get the athletes to have it on their body or their bike, and then we can deliver real-time data. It will be a really cool innovation.”

ESPN and Echo are working with Kinexon, a German company that specializes in real-time location- and motion-sensing and is providing much of the tech to support the experiments.

“We think that’s something that we’ll be able to use and build upon in the future,” says Echo Entertainment President Hugh Arian. “As we introduce that to the culture and they see what we can do with it, hopefully, they’ll buy into it more, and, next year, we can do even more with things like heart rate.”

Inside U.S. Bank Stadium, a fixture called “Huck Tower” erected by the ESPN Visual Technology group will use 10 small video cameras leveraging the Kinexon tech to identify, isolate, and track athletes during their runs.

Reed and Arian agree that, although neither tracking nor AR will be implemented this year, they see a future where the data can be used to build real-time augmented-reality graphics and could even be used by judges to make official rulings.

“We’re already talking about AR, and this is the type of things that, once we establish that the athletes are comfortable with it, using AR graphics to show how long a grind is or how high someone gets is going to be really cool.”