The 2,800-sq.ft. studio in Bristol, CT, features a load of technological capabilities

With the launch of the ACC Network on Thursday comes the debut of a sharp, sleek, and colorful new studio set on ESPN’s Bristol, CT, campus.

Located in Studio G in ESPN’s Digital Center 1, the 2,800-sq.-ft. home of the new college-conference network was no simple, templated build. This is a customized set designed to push the envelope in a few areas, including clever camera design and innovative graphics displays. 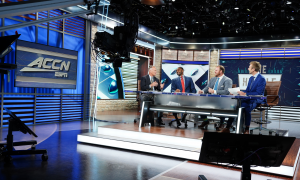 The ACC Network, which launches on Thursday, occupies a new 2,800-sq.-ft. studio at ESPN’s Digital Center 1.

It’s a space that not only is ready for launch today but has a lot of room to grow alongside the network over the next few years.

“We’re going to try to incorporate sort of the two tiers of storytelling, which is the human side, the human-interest side, but then also what is the next level of storytelling through data and analysis,” says Amy Rosenfeld, senior coordinating producer, ESPN. “We’re virtual-ready. We are experimenting with our capabilities on augmented reality. We are going to be pretty aggressive in the execution of data and analytics as it relates to a storytelling device.”

Among the studio’s most notable tech features are a pair of fully robotic telescoping pedestal “cameras in a box” that can offer unique views of the various set locations. The boxes are developed by Rhode Island-based production company Creative Conners. They can serve as integrated scene pieces when not in use but can quickly rise into action and transition viewers from one point in the set to another, allowing fun and seamless transitions between segments. 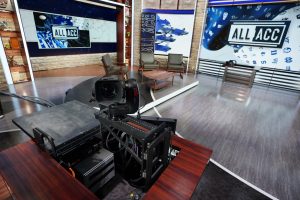 ESPN’s ACC Network studio features a “camera in a box” that can quickly transition from a set piece into a fully operational mobile robotic camera.

The robust studio is just another demonstration of ESPN’s commitment to putting its best resources behind this project. Although the network has learned lessons and has a nice template from the launches of both the Longhorn Network (2011) and the SEC Network (2014), it was a priority to give ACC Network a personality all its own.

“We wanted to make a point to make ACC [Network] its own unique space,” says Kristy Higgins, supervising director, ESPN, who helped oversee much of the studio’s development. “One of our goals, and something that the ACC as a whole really embraced, is pushing the individual schools, colors, and flavor. Each of the ACC schools speaks for [itself], and we want them to incorporate that, not only in our studio design but also in the graphic designs and in the colors that we use in some of the animations. I think we’ve captured a lot of each individual school in some of those designs.”

Rosenfeld agrees that the ESPN graphics department outdid itself with the graphics package, which will be used heavily within this studio.

“I don’t say this lightly, and I’m definitely dating myself,” she says, “but I’ve been doing this a really, really long time, and I’ve worked on really, really big events. I’ve worked on Olympics, I’ve worked on World Cups. I have never been a part of an animation and graphics package that is as forward-thinking and innovative and cool as this ACC Network package.”