Although much of the hype building to Thursday’s launch of the ACC Network has been centered on the thousands of live events that will be produced by ESPN and the conference’s 15 member institutions, the network has a flashy lineup of daily programming to fill in the day-to-day. 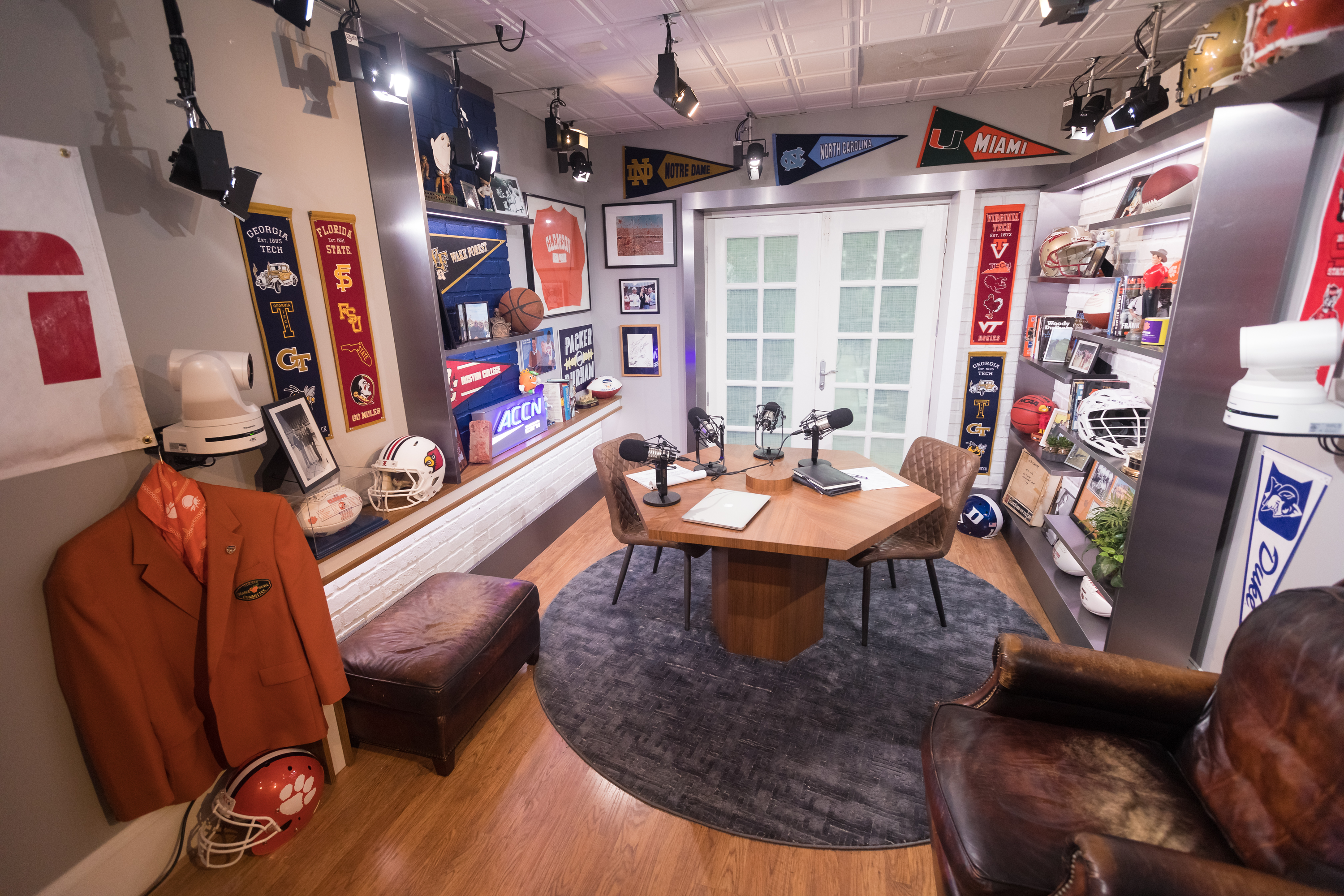 The studio for ACC Network morning show Packer and Durham was built in the basement of the home of one of the show’s hosts.

One of the crown jewels of the network’s daily schedule will be its morning show, a simulcast of Packer and Durham, a popular radio program hosted by Mark Packer and Wes Durham, airing on SiriusXM, and talking exclusively college sports, specifically ACC sports.

You won’t find the studio for this show under an ESPN Radio tower or tucked away in the halls of DC2 in Bristol, CT, however. Instead, you’ll have to ring the doorbell of Packer’s Charlotte, NC, home and head down to the basement. That’s right. The basement.

MORE:
ACC Network Launch Day: With Buy-In From ESPN and All 15 Schools, Newest College Sports Network Is Poised for Success

ESPN is certainly no stranger to having its reporters video in from home, since the days of NFL Insider John Clayton, but, according to ESPN Senior Coordinating Producer Amy Rosenfeld, the Packer and Durham studio marks the first time ever that ESPN has set up a multicamera permanent installation of a studio in the home of an on-air talent. 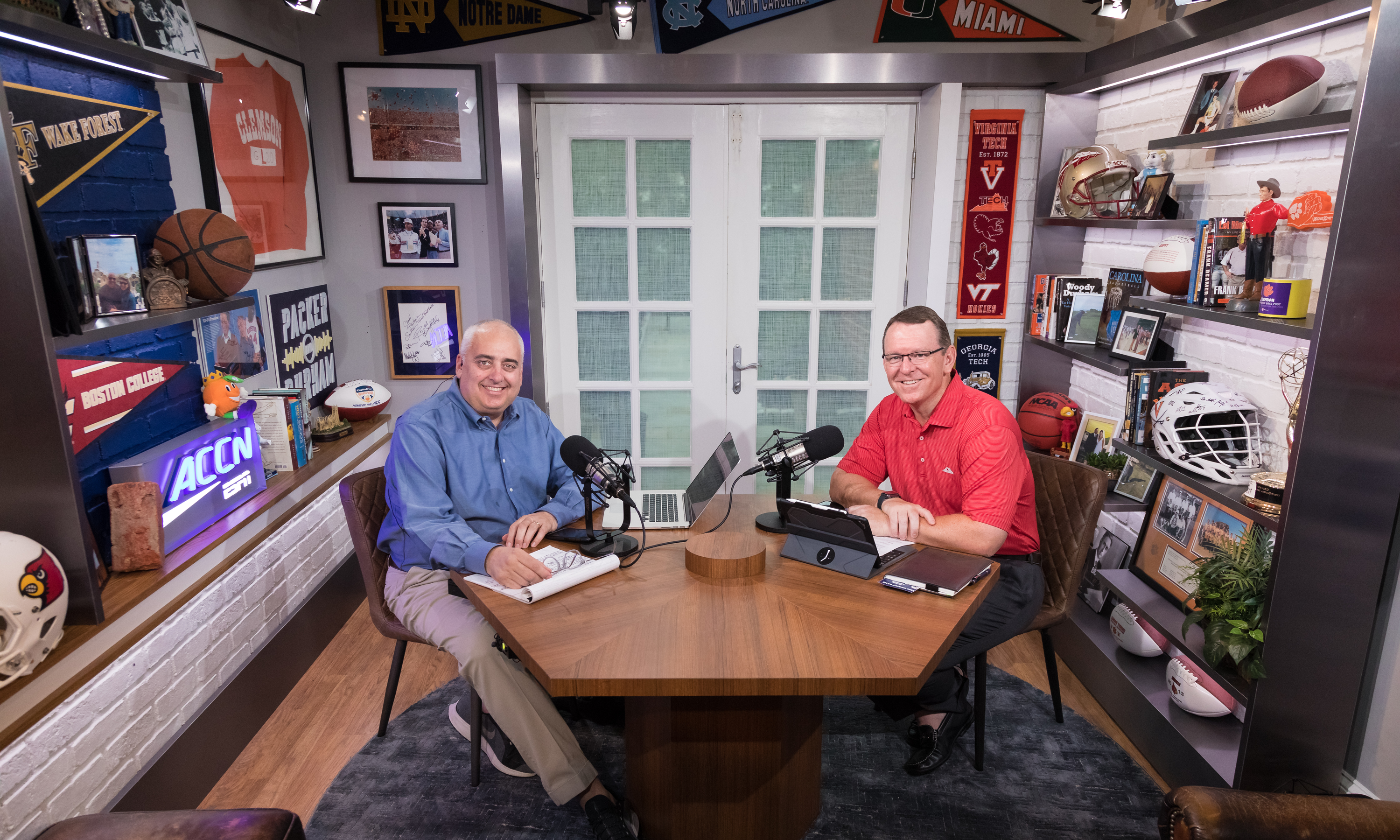 Packer and Durham, hosted by Mark Packer (left) and Wes Durham, premieres Friday, and will air on the ACC Network weekdays at 7-10 a.m. ET.

Although the show’s control room will be in Bristol, its studio set in Charlotte features four Panasonic AW-UE150 robotic PTZ cameras, which feed 1080p video via independent streams to Bristol’s PCR D8 over a 1-gig fiber circuit, according to Kristy Higgins, supervising director, ESPN. There are also a return feed for talent and Lawo encoders in the studio for when the two hosts communicate with guests or producers in Bristol. The Charlotte studio also features 20 Fillex lights and two built-in LED elements on the scenic walls, plus a DiGiCo Area4 audio core.

Higgins notes that ESPN will staff an operations manager at the Charlotte set for the first handful of weeks to help get the show going but the goal, ultimately, is to have Packer and/or Durham flip a few switches and run their end of the show’s workflow themselves.

The set showcases conference and school memorabilia and colors. There are movable bookshelves, a fake brick wall, and a desk at the center will seating for four, allowing for in-studio guests. There’s even a special place for Packer’s dogs, Chester and Fuller, to complete the at-home feel.

“The dogs are entirely worth it,” cracks Higgins. “They’re adorable. They’re really, really cute. I mean, we’re going to get ratings right there.”

Packer and Durham premieres Friday, Aug. 23 and will air weekdays at 7-10 a.m. ET on the ACC Network.