On Monday, the Golden State Warriors offered media their first look at their new 16,000-seat basketball and concert arena in San Francisco. Set to open its doors in less than two weeks, the facility contains a plethora of gorgeous luxury suite spaces, state-of-the-art training facilities for Warriors players, and delicious food options for fans, but it’s the giant, pristine centerhung videoboard that’s, undoubtedly, the number one conversation piece in the NBA’s latest jewel of a venue. 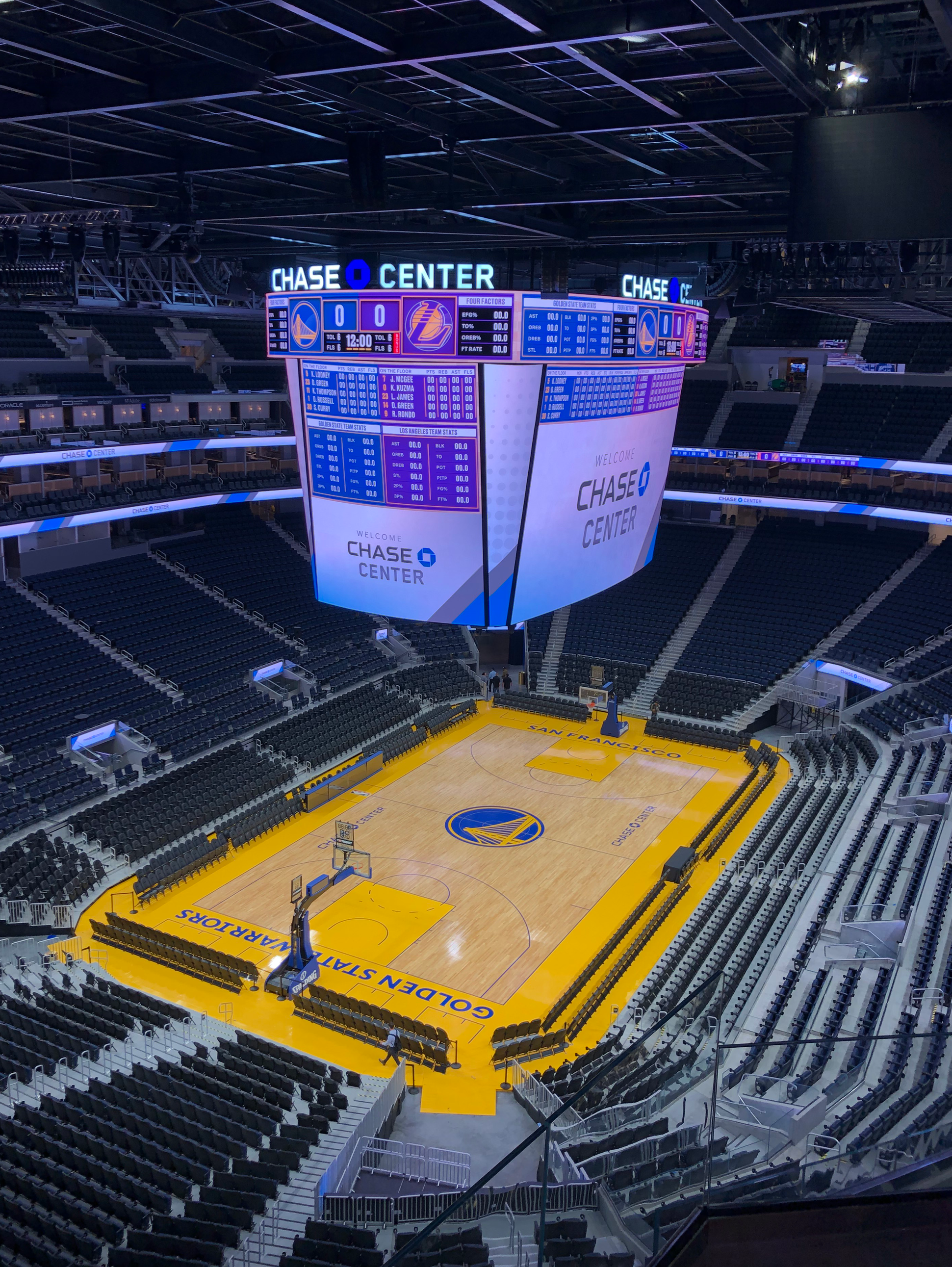 With 9,699 square feet of surface LED space, Chase Center’s centerhung board (which nearly engulfs the entire playing surface beneath it) is now the largest in the NBA, dethroning Milwaukee’s Fiserv Arena, which just opened last fall.

The 1080p structure – developed by Samsung – measures 82ft.-9in. wide by 52ft.-8in. tall and is actually made up of 15 individual displays. There’s a thin, curved halo-like screen that encircles the top of the main display, wedge-like screens that round out the edges, and even smaller screens within the base of the structure to allow fans in seats closer to the court to see information that they might be obstructed from higher up on the screen.

Like at many arenas, the centerhung can also be raised up to the ceiling for concerts, but the Chase Center also has a gantry that will close beneath the board, tucking it away safely and allowing for extra catwalk and rigging space for visiting acts.

One of the unique video features of the building are what the team are calling their “gantry boards” which are four narrow boards erected facing away from and above the primary centerhung board. Above both sidelines and both baselines, they offer time, score, and advanced stats for fans in the upper bowl who may have an obstructed view of the top halo portion of the centerhung.

The Warriors worked closely with its architects Mortenson | Clark Ventures during the planning process to conduct site-line surveys of virtually every seat in the building to ensure all fans had a clear view of the action. While there are great site-lines of the court from every seat there are portions of the upper deck that have obstructed views of some of the screens in the building due to the large size of the catwalk and the centerhung itself. These “gantry boards” help provide fans with that information that might be missing.

“For the fan experiences, we wanted to make sure that every fan can see as much of the board as possible and have access to all of the information,” says Paul Hawkins, who serves as Executive Producer, Warriors Studio for the Golden State Warriors.

The Warriors’ video production team has made stats and advanced analytics a huge focal point in its game presentation plans for the opening season at Chase Center. In addition to the halo and the gantry boards, there are smaller video screens in each of the upper four corners of the arena. The entire video display package places a strong emphasis on giving all of the information fans need from players on the floor, to common stats, to even some high level stats for the sabermetricians in the crowd. 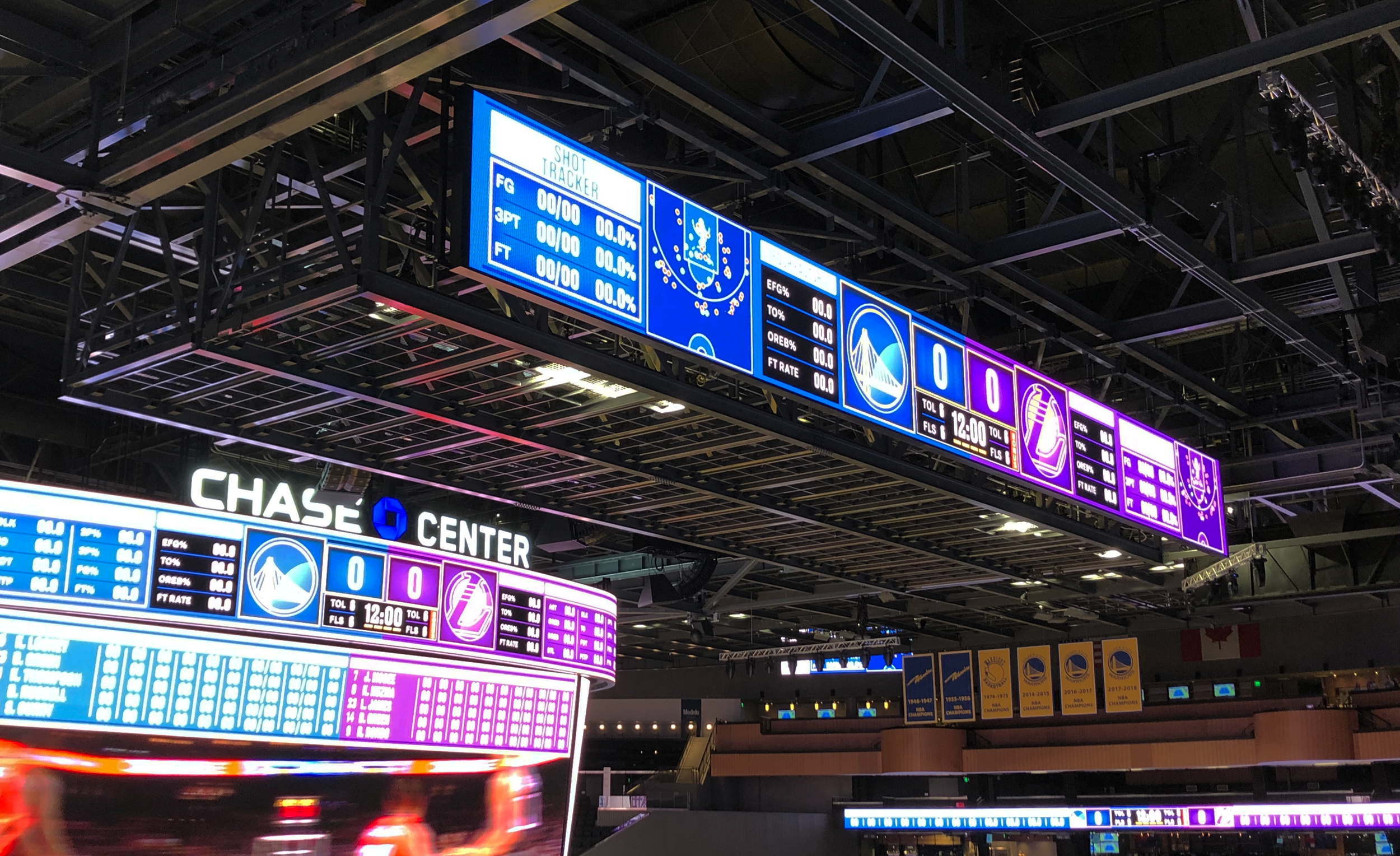 To help fans in the upper bowl see important game information that they might be obstructed from seeing on the primary videoboard, the Warriors erected four unique “gantry boards” above each of the baselines and sidelines.

“Not only do we want to become the best entertainment venue in sports, we want to become the premier destination for the basketball purist,” says Shawn Bennett, the Warriors’ Executive Producer, Event Presentation. “[We want to cater to] someone who wants to enjoy the game and the statistics of the game.”

That’s not all of it when it comes to video surfaces at Chase Center, either. There’s also a hefty video screen on the exterior of the building overlooking the Thrive City entrance where the Warriors expect about 80 percent of patrons to enter the building. That video in and of itself features 3,108 square feet of LED space and measures 74 ft. wide by 42 ft. tall.

For a slick new control room to power all of this, the Warriors partnered with industry stalwarts in Diversified and WJHW to design a workspace that’s built largely around key gear from Ross Video. The room’s production switcher is a Ross Acuity while the entire LED display control system is powered by Ross’ Carbonite Mosaic video scalers, Xpression Tessera, and DashBoard control system. The Warriors are working with Ross’ creative services team (Rocket Surgery) to create the production and LED graphics packages.

On the comms front, the in-venue staff is leveraging Riedel Communications’ Bolero wireless intercom system. As for replay purposes, Evertz DreamCatcher will be doing the heavy lifting.

Despite a tepid push across the venue space to consider pushing its video displays to 4K, HDR, or even 8K, all of the primary screens in Chase Center are currently 1080p. According to Hawkins, the control room is HDR-compatible and many of the boards are HDR ready, but he noted that he and his team wanted to tread with caution in those formats, especially in Year 1 of the building.

Stay tuned to SVG as we will deliver more in-depth coverage of the Chase Center as the arena creeps closer to an NBA debut.