The 2019 Pan American Games in Lima, Peru, have begun the Parapan stage (where Paralympic athletes compete) and for Mediapro, which has overseen production and technical operations for both the Parapan stage and the earlier games which ran from July 26-August 11, the efforts have been a success. The company produced and distributed the competition signal live for 33 international television operators covering the 52 disciplines present at Lima 2019. 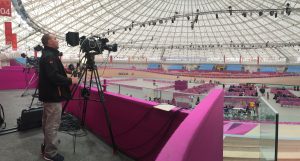 The IBC is located at the Lima Convention Center and has been a beehive of activity for the past two months as it is where the Mediapro team produced 1,000 hours of live event coverage with the help of a production team of more than 750 people. And rights holders are also on site as it features three key areas, each approximately 1,000 square meters in size: the host broadcast technical operations center, an area for rights holders, and then a central area with a welcome desk, booking area, and other event-related facilities.

All of the events were captured in 1080i but the opening and closing ceremonies of both the Pan Am Games and the Para Pan Am Games where shot in 4K. Fiber connectivity between the venues and transmission services were provided by Telefónica Peru, Aldea, and Net Insight. More than 270 cameras (including 64 specialized cameras like polecam, underwater aquatic cameras, Jimmy Jim, drones, etc). were deployed across the venues in 16 Mediapro OB units. There were also 27 ENG crews that captured interviews, feature stories, and more.

Multi-week efforts often require teams from vendors and manufacturers to also be on site and the Pan Am Games was no exception. Canon USA had a team of eight on site (including personnel from Peru, Columbia, Spain and Portugal) to oversee the maintenance of about 40 broadcast lenses, including EFP lenses, ENG lenses and respective BCTV accessories. Luis Ramos, Canon USA, senior specialist, quality engineering, says that it was a great chance to build a relationship with Mediapro in the Americas. Discussions began in April to figure out the equipment complement and support strategy as lenses like the wide-angle Canon HJ14ex4.3B series were needed to support the 4K production of the opening and closing ceremonies.

“The challenge for any type of Olympic sports event is the different locations and planning what venues and disciplines to tackle when,” says Ramos. “We also want to be incognito so we can take care of things without bothering the client. We had a short time to put together our plan, but we had help from Mediapro with things like accreditation and visas.”

The biggest challenge for the Canon team was maintenance at the surfing events where salt and sand are a constant enemy. Ramos says the team managed to keep them operating just fine before they moved on to other events.

“Canon was a very good partner for us, and they supported our ENG teams, OB trucks, and the rights holders,” says Gonzalez. “They were a special part in helping us in many situations.”