Live From the US Open: ESPN Takes First Step Toward IP Future

The 2019 US Open marks the end of an era for ESPN and the USTA as next year the technical infrastructure will make the leap from SDI baseband to IP. The SDI technical core this year, once again provided by Gearhouse Broadcast who oversees the technical aspects of the operations, is being put to good use by more than 400 production personnel one last time for both ESPN’s domestic unit, its host broadcaster operations, and those of other on-site rights partners like Eurosport, Wowow, Prime, and more. 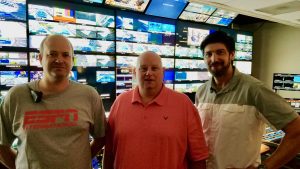 (l-to-r) Sam Olsen, Dennis Cleary, and Larry Wilson of ESPN inside the main control room at the US Open.

“We have a phased upgrade plan that as we can’t just think about tomorrow,” says Dennis Cleary, ESPN director, remote operations, of the move to IP. “We have to think all the way to 2025.”

The IP plans for next year are being finalized but there are plenty of changes this year, most notably changes to the compound. ESPN’s physical presence for the past five years has been a large two-story technical operation center with multiple control rooms, audio rooms, and the core technical facilities. This year the ESPN administration building also has two floors, expanding its size to 11,000 sq. ft. (ESPN’s total footprint is 22,580 sq. ft.) and allowing for the ESPN team to be more centrally located than ever.

“We consolidated operations that previously were in Arthur Ashe Stadium or the USTA unilateral area,” says Cleary. 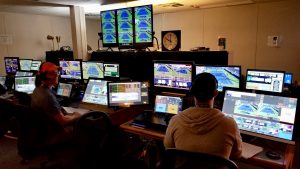 The second floor has an expanded production area for the ACES production teams that cover the outer courts, two audio rooms that handle audio for those courts, and additional commentary booths that can do off-tube or voice over work. There are nine two-person ACES production teams in the room with one person directing and operation the Simply Live ViBox switcher and a second operator who controls four cameras, two of which are automated via the Fletcher Trace system that tracks players

“The SMT graphics are automated while the Tracer has two automated cameras and two robotic cameras,” says Cleary. “At any point the camera operator can take control of those cameras but typically when the ball is served two Tracer cameras are put in automation mode and the other two cameras are operated based on the director’s coverage.”

The addition of a second audio console to the ACES area made it much easier for the audio team to divide and conquer.

“One room handles five courts while the other handles four courts and each audio room can take mics and off-tube commentary,” says Sam Olsen, ESPN, senior remote operations specialist. “The second room gives us more flexibility and more attention to detail as the operators are handling four or five courts versus nine.”

The core technical building were the larger courts have dedicated control rooms has also seen some changes. Grass Valley Kahuna Maverick production switchers have been added to the mix in some of the court control rooms.

Says Cleary: “The primary driver is to be more flexible so we can service the USTA and our clients and provide them with multiple layers of output.”

This year saw a refresh in the imaging side of things as all the cameras in Arthur Ashe and Louis Armstrong are now Sony HDC-4300 cameras or Sony P43 robotic cameras. Hitachi cameras are in use across the rest of the courts and also new this year is a two-point Supracam wired camera that flies over the plaza between Armstrong Stadium and Court 10. Telstra’s Netcam is also part of the production mix.

As for replay, EVS units this year include a mix of VIAs and XT3 as the 20 operators for the world feeds and the five for the domestic feeds are working with Multicam 16 software. And roving microphones are now operating in the 900 MHz bandwidth and the Alteros ultra-wideband wireless microphone system is in use at the practice courts.

This year the domestic control room also saw an upgraded monitor wall that can display 200 monitors but, most importantly, consume less energy. And ESPN International, meanwhile, finally has its own host set outside on the Plaza where two robotic cameras and a jib camera can be cut in the International control room via a Simply Live Vibox system.

“It offers a huge amount of flexibility rather than having separate panels,” says Olsen.

The improved communications are making a difference for what is by far ESPN’s largest sports production effort. For example, there are 29 outbound transmission paths for ESPN and ESPN International. And even before the US Open officially kicks off the ESPN team has been on site for four days of qualifying coverage that was produced out of NCP VIII so that the remainder of the production facility could be finalized. Olsen says the challenge, as always, is staying on top of a very large-scale operation.

“We have 142 cameras out there and well in excess of 300 microphones serving,” he says. “And we have to serve the domestic team, the host team, and also look after the venue and fiber infrastructure. It’s a moving target as the venue is this is a developing venue.”