In the era of sports in a digital age, the University of Central Florida is one of a kind. You could say that the Knights have developed a reputation over the years of being bold, brash, and entertaining online — especially on social media when it comes to pumping up its tremendously successful (and young) football program. 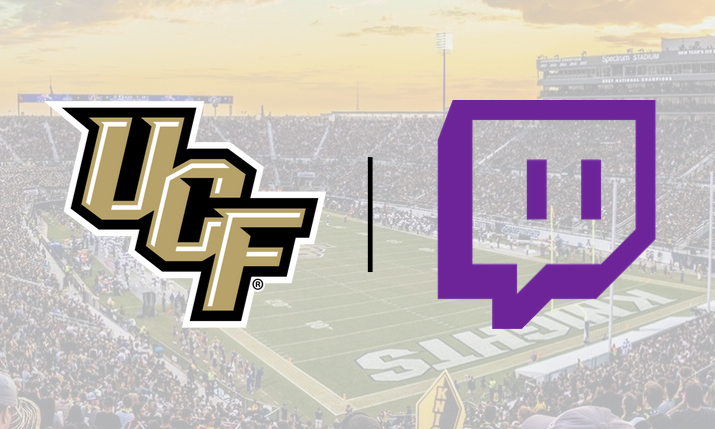 So it should come as little surprise that its video production and digital media teams within the athletic department take pride in staying on the cutting edge of content creation and distribution. Looking to find a new way to engage with its unique (and young) fanbase, UCF has begun live streaming content to the popular videogame-driven live streaming video platform Twitch. At its channel ucfknights1, UCF has already streamed 17 live program and VOD content debuts with plans to do significantly more as the academic year rolls on.

“One of the things that really impressed us was how younger demographics have kind of latched on to Twitch,” says John Kvatek, Associate AD, Multimedia and Creative at the University of Central Florida. “When we started looking at the whole situation, it was trying to figure out where could we fit in that? As an athletic department, we view ourselves as being a bit of a disrupter, as being young, as building the future of college sports. We’ve got a pretty crazy reputation on social media, and our social media guys have done a tremendous job of building that persona out for us. We want it to continue, and get our streaming to that identity as well. Twitch just made perfect sense.”

Most notably, UCF has found success with streaming its head football coach’s postgame press conferences to Twitch. With many fans leaving the stadium and ending up in traffic leaving the game, UCF is directing its fans to watch the presser on their phones on their ride home through in-stadium announcements and videoboard promotion. UCF has also gotten into the habit of debuting its popular Knight Flicks series and various coach’s shows on Twitch. Kvatek adds that his department is cooking up some new ideas to come, including reaction videos and having some of its players livestream playing video games.

“There’s so little risk with Twitch,” says Kvatek, “and because Twitch inherently encourages you to do things that are outside of the box, I’ve told my staff, ‘Go think about the things you really like to do. The things that you’d sit back and go, hey, you know what would be kind of cool? Now, there’s so little risk, let’s go try it, and if it fails we won’t do it again.’ If it takes off, then great, we’ll keep going. I don’t know that if we were behind a subscription paywall we could do this.” 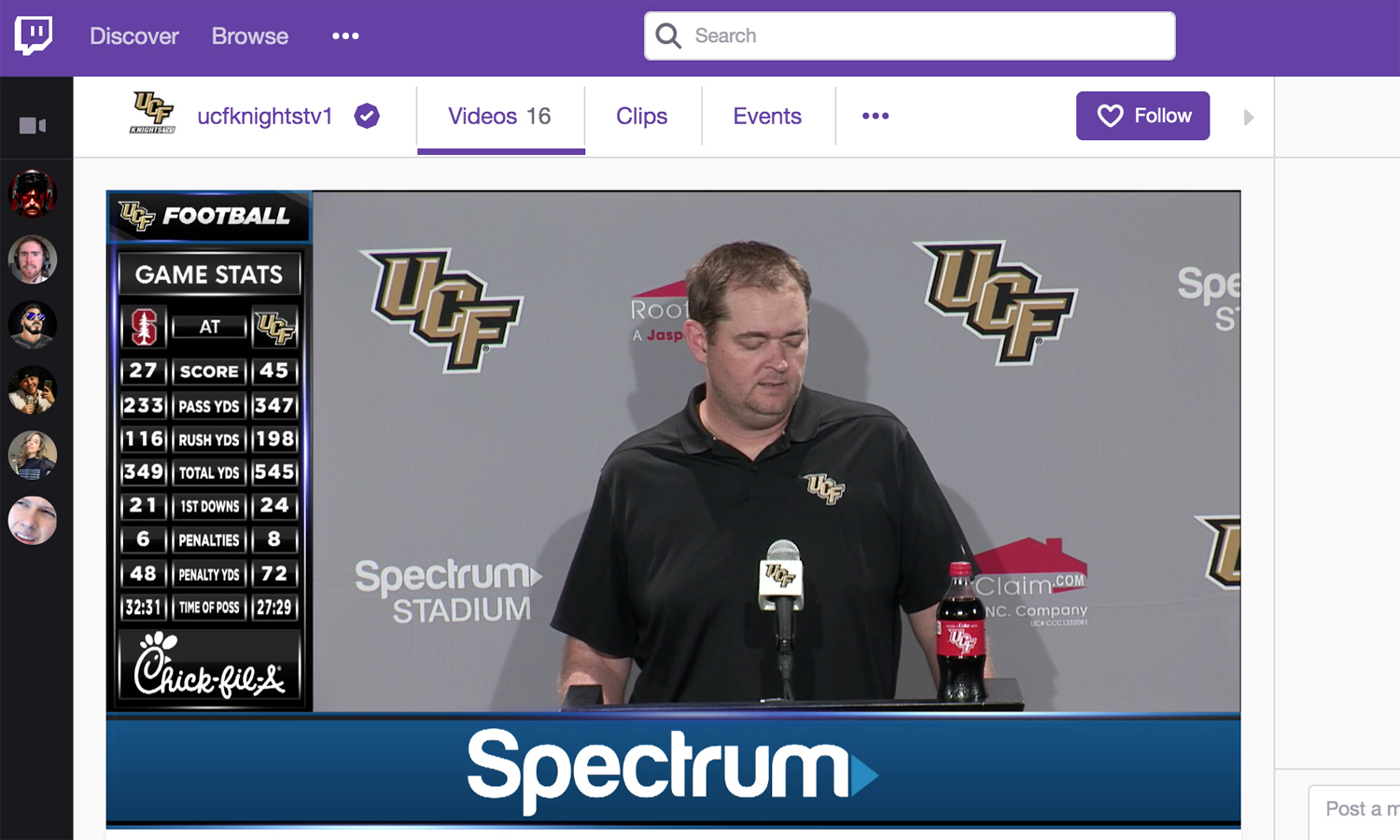 UCF (and other American Athletic Conference schools) have been in somewhat of a limbo right now as it pertains to its digital rights. The formerly NeuLion schools were in the process of transitioning to Sidearm Sports but, according to Kvatek, his team wasn’t very interested in migrating its audience to an entirely other platform, especially when so many of its live events are already committed to ESPN+. So the desire to find an inexpensive, highly trafficked platform made Twitch an intriguing option.

In addition, UCF is a rare school that does not have a branding, licensing, and multimedia rights management company like a Learfield IMG College or a JMI Sports, so the onus is on the video content creation team internally to generate digital inventory for the athletic department’s corporate sponsorships team to package and sell.

“For as long as I can remember, we’ve always wanted to be in an environment where we could put our content out there for free,” says Kvatek, who has been with the Knights since 2004. “We didn’t want to have to do a subscription paywall and we really couldn’t do that with our partners at the time. Twitch makes it easy. Twitch also gives us those monetization strategies that are outside of the norm.”

“The thing that holds it back is, we have a tendency in the industry to think that we have to do these rights deals,” says Kvatek.  “A lot of conferences are locked up in rights deals or conference networks. There are FCS conferences that have deals with streaming services, over-the-top services, where there’s money involved and exclusive streaming opportunities. I’m not sure that you have to do that anymore. If you have a little bit of production capability, you can get into Twitch and you can work your way towards partnership, and you can monetize, and who knows? Probably, in the end, make just as much money. But it takes a little time to build that business up.”

Kvatek and his team are in regular conversations with Twitch to iron out where exactly their kind of content fits into the platform’s environment. Twitch has made it clear that they are interested in sports. NFL’s Thursday Night Football, NBA G-League, and NWHL live games are all streamed there. However, the platform is largely a strong fit for, perhaps, not the traditional live broadcast of a sporting event, but rather other types of live content around the culture and fun of sports, whether it has a videogaming element to it or not.

Internally, the added bonus is that streaming to Twitch required little to no change in the UCF video team’s technological infrastructure. Kvatek says that his team streams directly off of NewTek TriCasters that they already used and Epiphan encoders. Streaming directly to Twitch doesn’t require much, though as many active users utilize their own gaming devices or stream using free software through a laptop and a single converter. UCF is even pushing 1080p-quality video to its Twitch channel.

The only real investment that needed to be made was creating graphics that properly fit the format of the platform. There’s also been a desire from viewers for UCF to develop some custom Knights-themed emotes (essentially, an animated emoji used in the stream’s accompanying chatroom), which, he says, they are currently working on. Otherwise, UCF has just been learning the functionality of Twitch — how best to leverage the notifications feature and to monitor and participate in the chat section.

Twitch is a platform where not too many professional and collegiate sports teams have yet begun flirting with. So what is Kvatek’s advice for those that may be looking to experiment in this playground? For colleges, consult your students. There’s likely someone who has experience streaming to the platform already.

“The biggest kind of experts and consultants that we have are students,” says Kvatek. “They get excited and they give us ideas. ‘Hey, could we do this?’ ‘Absolutely. How do you want to execute that?’”

“This was not a heavy lift, it really was not,” he continues. “The platform is very straightforward. I’ve been very impressed with how smooth the transition has been, and how easy it is to do it. I think, as the perception changes — that it’s not just about esports and videogaming — you’ll find out this is a platform that a lot more colleges and universities are going to look at.”