In Las Vegas, size matters perhaps more than almost anywhere else, so the scale of the scoreboard for the MLB Triple-A league Las Vegas Aviators at their new Las Vegas Ballpark stadium is both breathtaking and unsurprising. At 3,930 square feet, the outfield display — installed there by a joint venture of AECOM Hunt and PENTA Building Group for the 2019 season — is the largest Daktronics has placed in baseball’s minor leagues and is in the top 25 in size for all professional baseball venues in North America. 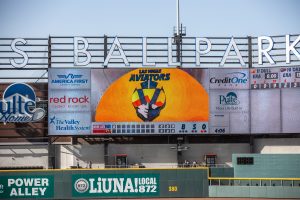 The 3,930 sq. ft. video board is at the top of the minor league baseball circuit.

The new $150 million Las Vegas Ballpark opened prior to the Aviators’ 2019 season and replaced the team’s previous home at Cashman Field, an aging ballpark that the team had called home since 1983.

“The new ballpark is a major upgrade from the old facilities at Cashman Field,” notes Gary Arlitz, the Aviators’ Director of Game Entertainment. “In the production room alone, we have upgraded to all Ross production equipment. This equipment has changed our gameday-production workflow [and we added] experienced control-room operators who had working knowledge of the equipment prior to the start of the season. Additionally, the new equipment has allowed has allowed us to advance our out-of-ballpark experience. We now run a full live-streamed MLB-styled broadcast with a six-camera crew, full audio scope with the addition of parabolic microphones, and a dedicated stream-side director.”

The scoreboard, which measures approximately 31 feet high x 126 feet wide, is unique in that it was designed and fabricated to match the contour of the stadium’s outfield wall. The display is capable of variable content zoning, allowing it to show one large image or be divided into multiple zones to show any combination of dynamic content. 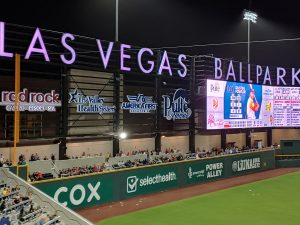 Daktronics aligned the scoreboard’s structure with the unique contours of the outfield wall.

According to Arlitz, the big board is the 21st largest in North America and gets plenty of attention. Aside from pure scale, Arlitz says the new display has been “a game changer” in terms of the team’s content and how it’s portrayed.

“With a larger camera crew and better locations for our cameras, we’re able to really bring the fans into the game,” he explains. “Kiss Cam is always a favorite, but we’ve added several different ‘cams’ for more crowd interaction. We’ve also added on-field promotions that will be exclusive to the board. Also, by bringing in the higher-end equipment, we have been able to step our game up and do more creative things, thanks to a crew of people who are never short on ideas.”

Rusty Lenners, Daktronics’ sales representative, says putting a major-league scoreboard in a minor-league stadium is an audaciously Las Vegas kind of thing to do.

“Pairing the largest Daktronics LED video display in the minor leagues with the new Las Vegas Ballpark will blow fans away,” he says. “They have the exact same technology that many major league clubs have installed in their venues.”

The Control Room and the Cameras
The new production control room is built on Ross systems, including a Ross Graphite video switcher with 13 HD SDI inputs, a two-channel Ross XPression graphics system with Datalinq, and a Ross Ultrix FR2 routing frame with audio embedding/disembedding control. Other key gear includes a Yamaha TF1 audio mixer with Dante enabled and Sony and Panasonic cameras. 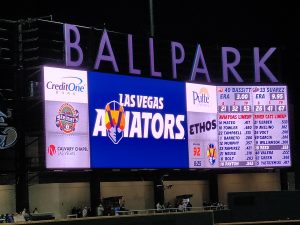 When stadium lights are unable to turn on right away, the 31 f.t high x 126 ft. wide scoreboard is so bright that games are able to continue.

Filling that massive screen up is a host of new cameras. They include a Panasonic AW-HR140 PTZ camera located at centerfield, with control from the PA Ops room; a Panasonic AW-HE130 PTZ cam located in the home bullpen with control from the PA Ops room; three Sony PWX-X320 camera chains with Fujinon XS17x5.5BRM Lenses, intercom and remote paint control; and another Sony PWX-X320 camera chain configured with Wave Central AXIS-AXTX3 wireless camera system.

Trey Carter, the Aviators’ Technical Director and AV Tech, adds that the combination of technology and technical talent takes the entire enterprise to a major-league level.

“Integrating our experienced control-room operators… [with] the new equipment has changed our gameday-production workflow,” he says.

And like everything else in Las Vegas, bets are always hedged. Arlitz remembers that two lighting towers failed during a game early in the season, but the game never stopped.

“Because the scoreboard is so big and bright, “he says, “we were able to continue the game without any stoppage in action.”

The Aviators just closed out their first season in the new venue. It may have ended in a 7-3 loss to the Sacramento River Cats in a winner-take-all Game 5 of their Pacific Coast League semifinal playoff series, but considering that it was named Ballpark of the Year by Ballpark Digest — which also named the Aviators Team of the Year — this $150 million stadium turned out to be a good bet.