Since the birthplace of our nation, Philadelphia has been internationally recognized as a place where ideas are generated. The trend began in 1776 with the signing of the Declaration of Independence. Four miles south of the hallowed grounds of the former Pennsylvania State House, Philadelphians are once again leaving their mark on history 243 years later with the first 4K kinetic scoreboard inside of the Wells Fargo Center. 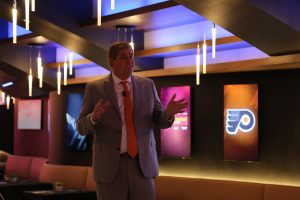 Phil Laws breaks down the process of creating the 4K kinetic scoreboard.

“The videoboard is now a huge part of the fan experience,” says Phil Laws, VP, operations, Comcast Spectacor.” It has also been great for revenue growth and for our corporate partners to be able to highlight their products and services and be able to reach our fan base.”

The Genesis of an Idea

Before Philadelphia Flyers fans laid their eyes on the board for the first time during the inaugural preseason game against the New York Islanders on Sept. 16, the foundation of this epic installation was planted in the past. More than 20 years after its grand opening in 1996, the arena was caught in a stage of creative stagnation. With multiple facilities in the works across the NBA (the Milwaukee Bucks’ Fiserv Forum broke ground in 2016) and the NHL (the Detroit Red Wings’ Little Caesars Arena opened in 2017), the home of the Flyers and the 76ers needed to make an upgrade to keep pace. After conducting research on these builds, Laws and his team discovered a major obstacle.

“The scoreboard itself started with the very particular problem of the steel. We wanted a big board, but we looked around at other NBA or NHL facilities that had large scoreboards [and saw] rigging problems with concerts,” he says. “[Since] Philadelphia is a must-play market, it’s a spot that every big tour is going to hit and rigging around one of those big boards would have been a really onerous expense. There’s only so much that you can pass on to your partner, so we had to come up with a solution and that’s where the expansion of the scoreboard came from.” 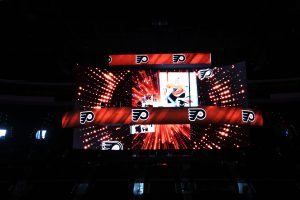 When in motion, the videoboard can expand an additional 32 ft.

When the tangible question was answered, the Wells Fargo Center recruited their long-time partner ANC to do the job on the entertainment side.

“We had the idea of bringing the in-bowl experience and the experience from the concourse into one holistic picture,” says Laws. “We tried to figure out how to make that happen and sync it up with our software.”

At a weight of 45 tons, the delivery crew hauled the dissembled parts 90 miles from Lititz, PA, to the City of Brotherly Love in 16 tractor-trailers and three flatbed trucks. Once onsite, the pieces of the puzzle were put together and the finished product was erected 48 hours prior to a Shawn Mendes concert on Aug. 28.

The players on the court/ice and videos projected on screens are not the only elements in motion. Unlike traditional scoreboards that remain stationary, the structure measures at 28 ft. x 30 ft. while resting, but at its maximum size, the two exterior faces can stretch horizontally by 32 ft. to a full width of 62 ft. While these elongated screens breathe in and out, the end-line screens at 28 ft. x 22 ft. will remain static. In record-breaking fashion, the videoboard will feature more square feet of 4mm LED than any other NHL and NBA arena.

Next to the main attraction, two double-sided, 5 ft. x 67 ft. crown trusses add another layer to the display. In an attempt to embrace vertical mobility, 8 ft. x 65 ft. crowns can be integrated into the overall entertainment of the resizeable main board or can be isolated to be moved on its own. When scaling the height of the video board, the 12,000 lb. crowns can cover 4 ft. per second and conduct a full pass in 30 seconds.

Along with maneuverability, the potential future of installing 4K technology was nipped in the bud with this project. With 40 million pixels, a lack of clarity is something that won’t be experienced inside the walls of Wells Fargo. At a total of 6,601 sq. ft., the centerhung now includes 50% more screen real estate than its predecessor.

“We asked ourselves, ‘What else can we do that’s really cool, fun, and exciting?’” says Laws. “It all came together into a wonderful package.” 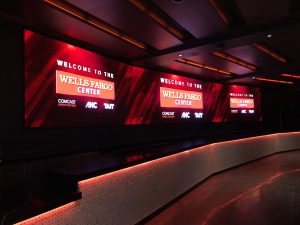 The Dawn of a New Age
Back in the present, the LED centerhung enters the fold quite nicely with the arena’s renovation initiative dubbed “Transformation 2020.”

“This year on the main concourse, we’re doing [extensive work] with additional ribbon boards and things that are both branding and fan engagement opportunities, so we are displaying flexible signage for concession stands,” he says. “Eventually, the full video takeover of the building is the end goal.”

As Ben Simmons and Joel Embiid hit the hardwood floor and Claude Giroux tightens up the laces on his skates, the 4K kinetic video board can become a beacon to the next generation of fans to head over to the Wells Fargo Center.

“We’re in the business of competing with the couch [at home], so anything we can do to get fans off of that couch and into the arena is a big deal,” says Laws. “The results on the ice and on the court drive attendance, but it’s also about all of these other experiences that make it fun for the fan to keep coming back over the years.”