SVG took over Esports Stadium Arlington on Thursday, providing more than 100 video-production professionals a behind-the-scenes look at the largest dedicated esports facility in North America. Opened in late 2018, the $10 million, 100,000-sq.-ft. facility represents the most significant commitment to esports by a municipality to date. The SVG@Esports Stadium Arlington event offered attendees a full afternoon of informational sessions and an intimate tour of this state-of-the-art esports venue. 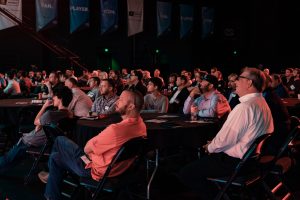 More than 100 video-production professionals attended the event in Texas.

The day kicked off with a keynote presentation from Esports Stadium Arlington President Jonathan Oudthone. Located in the Arlington, TX, Entertainment District, not only is it the largest dedicated esports facility in North America, it’s also extremely versatile with the ability to scale from 250 to 2,500 fans depending on the competition. Oudthone provided a deep dive into how the project developed, the vision of the city of Arlington and Esports Venues LLC, and the robust capabilities of this unique venue.

Next up was the “Esports Production: Telling the Story of the Game” panel, featuring a trio of esports-production veterans with more than three decades of combined experience producing live esports events. Do Not Peek Entertainment co-founder Jason Baker, ES Arlington VP of Broadcast Corey Dunn, and Ross Video’s Cameron Reed (a longtime freelance esports director/producer) detailed what it takes to create a high-level viewing experience for viewers — both in the arena and streaming at home. The three dove into their techniques at the front bench, how they work closely with observers to produce the in-game feed, and how their production strategy varies from game to game. 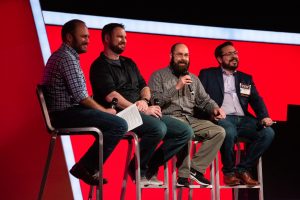 With an esports-venue building boom expected in 2020 and beyond, the final panel of the day addressed “Home Stadium 2020: The Esports Venue Revolution Begins”. Coincidentally, the groundbreaking for the upcoming Fusion Arena in Philadelphia was also taking place on Wednesday and Marvin Mastin, brand activation manager at Populous, which is designing the venue, was on hand to discuss the $50 million esports venue set to launch in 2021.

In addition to Mastin, Esports Stadium Arlington Marketing and Partnerships Manager Johnathon Angers, WJHW Managing Principal/VP Josh Beaudoin, and 1337 Facilities CEO Bob Jordan CVE took the stage to provide an overview of the rapidly evolving esports-venue landscape. With Blizzard Entertainment’s Overwatch League set to start home-and-away games during the 2020 season (and the Call of Duty League soon after), the esports industry appears to be on the verge of a massive building boom. The panel provided insight into how to design an esports-specific facility and what to expect in the next 12-18 months in the world of esports venues. 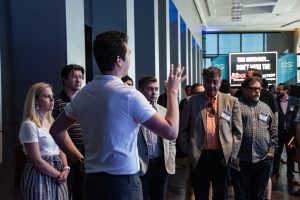 After the panels concluded, attendees took a behind-the-scenes tour of the stunning Esports Stadium Arlington.

In addition, the day’s program also included a Canon Case Study focused on “Choosing the Right Optics When Planning an Esports Arena” featuring Dunn and Canon’s Rich Eilers, as well as an Esports Technology Spotlight from Marshall Electronics Director of Marketing Jackson Root.

The day concluded with an in-depth tour of the facility from the ES Arlington staff, including behind-the-scenes looks at the mainstage, control room, observer room, postproduction and audio facilities, team training rooms, and more.

The event was made possible through the support of the Esports Stadium Arlington staff, as well as Title Sponsor Ross Video and Event Sponsors Canon and Marshall.