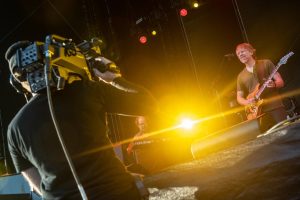 The company also made extensive use of a smaller fly-pack comprised of six AW-UE150s on a nine-show spring tour with a new band, Ghosts of the Forests, fronted by Phish’s Trey Anastasio. The new Panasonic cameras are slated to be used on Phish’s fall/winter tour.

201 Productions’ principal Trey Kerr explained that, with the purchase of five AK-UC4000s and six AW-UE150 PTZs with AW-RP150 controllers, the company’s primary fly-pack systems now boast HDR capture across all the cameras. (Cameras with HDR are capable of capturing brighter whites and/or deeper blacks.)

“Concert productions are the mainstay of our business, and the combination of larger camera sensors, 4K and HDR affords us so much clarity and exceptional performance in low light,” Kerr said. “We’re committed to providing the best available solutions for our clients, and given music performances’ varying contrast levels, with HDR we are able to capture the wide gamut of what we’re trying to shoot.”

201 Productions’ chief assignment for Phish is live production, but the company is also tasked with providing a feed for live webcasts on LivePhish.com, as well producing performance videos for the band’s YouTube page and archiving each concert.

“The UC4000 delivers exceptional performance in low light, and really enables us to deal with whatever red, green or blue washes the lighting designer calls for,” Kerr noted. “The UC4000 can handle a solid blue wash better than any other camera I’ve ever experienced.”

For the majority of The Ghosts of the Forest’s performances, a staff of only two–working with the two AW-RP150 controllers–was able to manage 10 cameras the (six AW-UE50s, three POV cameras, and a locked-off Panasonic AK-UC3000) for live IMAG and the recording of archival video.

“There’s so much functionality with the AW-UE150 and the AW-RP150 controller,” Kerr said. “It was so impressive how we were able to start a move, then transition to another camera, and it was simply remarkable what we could accomplish with only two people.

“Because of AW-UE150’s advanced features, we are now able to bring our same professional, award-winning production values to smaller, lower-budget events.”

Kerr typically shoots and archives music tours in 4K, 3840 X 2160 29.97. The UC4000s are outfitted with UHD UA107X8.4 Box-Type 107x Zooms for the main front of house lenses, as well as the Fujinon UA70x8.7 box-type zoom and the Canon HJ22ex7.6b multipurpose production lens. At most venues, he uses one AK-UC4000 each in the pit, handheld on stage and at the front of the house mix position, with two deployed in various ways contingent on the layout of each space. Four AW-UE150 PTZs are always used on stage (left, right, on the drum kit and upstage center), with the fifth reserved as a “bonus-cam” for interesting aspects or angles.