DPG Media in Belgium is in the process of completing an all-new ST2110-based IP production facility at Medialaan in Vilvoorde, dedicated to its entertainment offering (vtm, the private TV channel in the Flemish part of Belgium, Q2, and others). Concurrently, DPG Media is putting the finishing touches to an all-new broadcast facility in Antwerp for its news services. 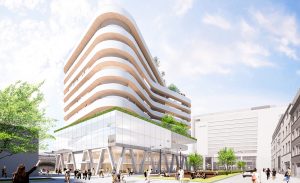 DPG Media selected Lawo for all audio-, video-, and control-over-IP tasks, the aim being to enable agile remote operation in various configurations.

Designed for true remote production capabability, part of the specified components will be housed in flightcases and used both on DPG Media’s Medialaan premises and all over Belgium during outside broadcast events.

The entertainment production gallery in Vilvoorde (near Brussels) will be equipped with an installed setup with, among others, the ability to control the remote set over IP (LAN or WAN).

The remote rack, for its part, will be fitted with three A__stage80 multi-format audio stageboxes that natively support ST2022-7-based, fully redundant WAN remote operation. System-wide 2022-7 redundancy is provided by two independent Arista networks.
Orchestration will be delivered by Lawo’s VSM broadcast control system consisting of a central server in the data center and 23 hardware and software control panels. VSM allows for vendor-agnostic, intuitive routing of all signals and streams and in-depth control and monitoring of edge devices.

“IP-based media operations are the future,” says Chris Verhoeven, Director Broadcast Operations at DPG Media. “Networking all broadcast devices and solutions, both locally and over a wide-area network, provides us with the flexibility we need to stay at the cutting edge. Lawo has the infrastructure to make this happen and an overarching, vendor-agnostic control system to supercharge our broadcast operations. All DPG Media needed to do was put one and one together.”

Hardware installation started several weeks ago, and system configuration is scheduled to start in late September 2019. The first tests for the entertainment setup are scheduled for November 2019, and DPG Media’s news service in Antwerp will be up and running at the end of this year.