Georgia Institute of Technology invested in 13 Panasonic AK-HC5000 HD HDR high-speed broadcast camera systems in full studio configuration to prepare for the recent launch of the Atlantic Coast Conference (ACC) cable and satellite television network. This purchase was part of a large-scale campus initiative headlined by the construction of the Georgia Tech Athletics Video Operations Center, a new 6,400 sq. ft. facility that houses a broadcast studio and multiple control rooms, all in line with the production requirements of the ACC Network. 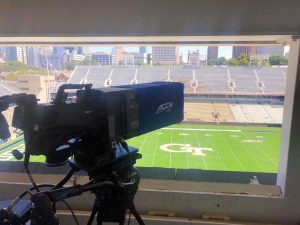 Georgia Tech Athletics has utilized the HC5000s to produce broadcasts of Division One Yellow Jackets’ sports since last spring, notably including three post-season baseball games that aired on ESPNU and the SEC Network.

According to Andy Blanton, Assistant Athletic Director-Video & Broadcasting, Georgia Tech Athletic Association, the ACC Network imperative challenged Georgia Tech to improve broadcast technology across the board, adding that the super slo-mo capability of the AK-HC5000 was an essential component of this.

Blanton said that Georgia Tech is covering a large number of varsity sports with the AK-HC5000s.” We wanted all the cameras to have the 240fps capability, with the ability to turn that feature on wherever we were on campus, without having to purchase any separate licenses,” he noted.

Blanton anticipates that during 2019-2020 school year, the AK-HC5000s will be used to cover up to 130 sporting events, with a minimum of 20 of these seen on cable/satellite broadcasts on the ACC Network. The new Network—a partnership with ESPN—will feature 450 exclusive live events annually, with 900 more expected to land on the online-only ACC Network Extra. 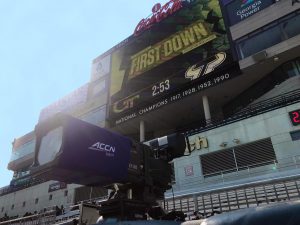 Blanton added that Georgia Tech Athletics has a long, positive history with Panasonic professional cameras, including several P2 HD shoulder-mounts that continue to be used for ENG shooting, and 10 AVCCAM HD handhelds that are used for coaching video. Recently, two AU-EVA1 5.7K cinema camcorders were purchased for use by department’s production feature group.

Blanton explained that beyond live broadcasts, the AK-HC5000 cameras are being used for live transmissions to the in-house video boards at most of these sports venues.