2,270-sq.-ft. space is fully LED and a complete refresh of its predecessor, which was nearly 10 years old

Versatile. Light. Large. There’s undoubtedly a trend in sports television studio redesign these days, and on Saturday, the team at NBC Sports Bay Area and NBC Sports California will be the latest to refresh their home headquarters when they debut a sparkling studio to anchor their season-long coverage of professional sports partners that include the NBA’s Golden State Warriors, the NHL’s San Jose Sharks, and (when baseball comes back around next spring) MLB’s San Francisco Giants and Oakland A’s. 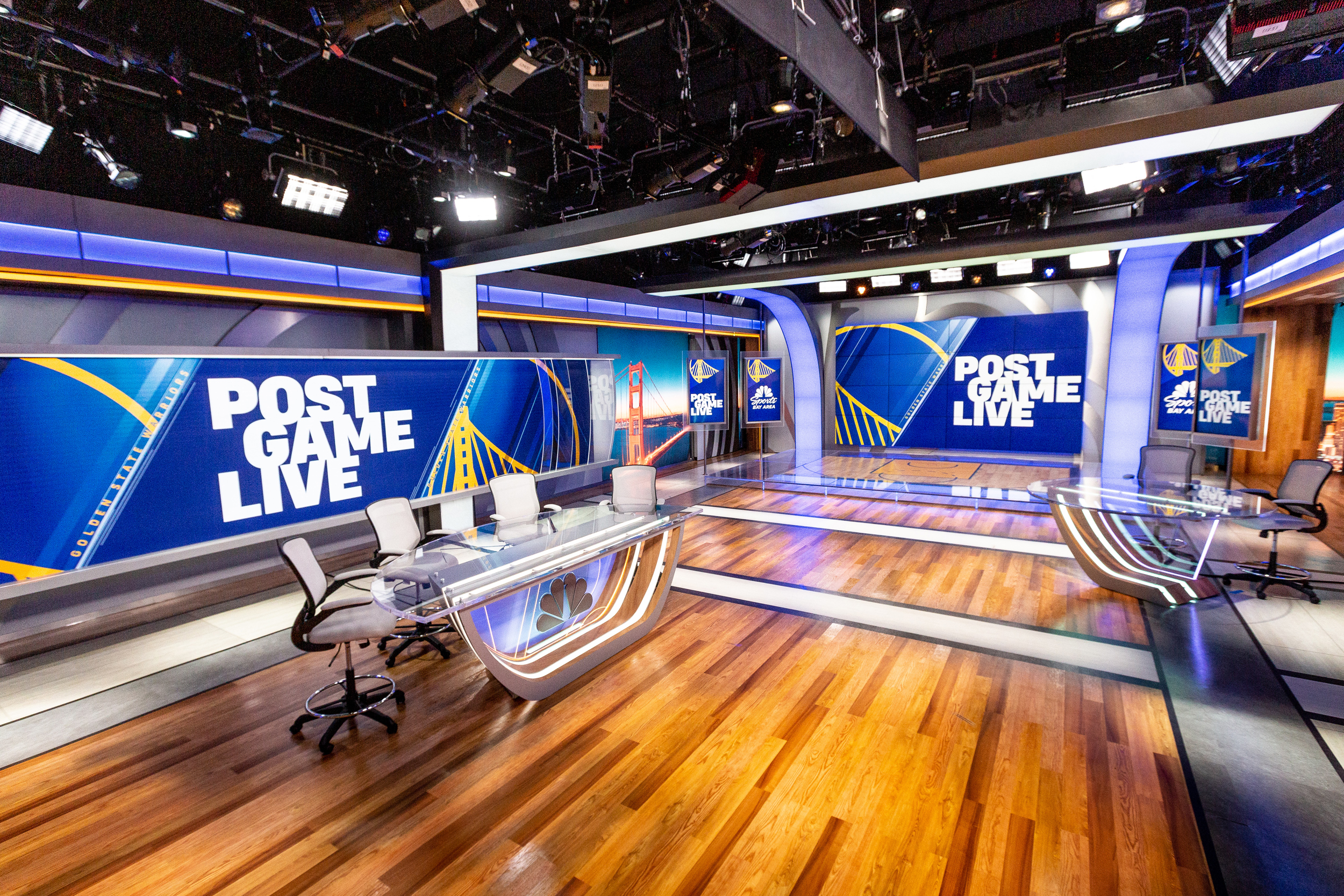 At 2,270-sq.-ft., the massive space features numerous sharp and sleek video elements, including a 30-ft.-wide LED monitor wall behind the primary anchor desk, a 16-ft. wide by 9-ft. tall monitor (along with five smaller vertical video monitors) at an interactive demo area, and 120 LED color-changing tiles nested into the walls and floor. It’s a bright and dynamic space that is quite the shift from the network’s previous set, which was built nearly a decade ago and had a much darker, theatrical, contrast-y feel.

After a week of rehearsals, the set will hit air for the first time on Saturday at 6:30 p.m. PT for Sharks Pregame Live prior to puck drop of the Sharks road tilt with the Anaheim Ducks. NBC Sport staff — both in front of and behind the camera — are fired up.

“It’s given a shot of adrenaline to everybody,” says Peter Schofield, VP, Engineering & Operations, NBC Sports Bay Area and NBC Sports California. “The talent is incredibly jazzed. I tell you, the people who seem to be the most excited about it are the analysts; the former players. They are all over this. Every time they have come into the office while it’s been under construction, they have been at it, taking pictures, talking about it. It’s really reinvigorated people. It’s the same thing for the producers and the crew. It’s new toys and new options that we’ve never had before. They are incredibly excited about it.”

Set redesigns are a primary directive of NBC Sports Regional Networks, which has tasked each of its regions to refresh their looks across the board. NBC Sports Philadelphia already rolled out their studio redesign back in March. Now it’s the Bay Area’s turn with Schofield and his team working with the design group at Jack Morton Worldwide. Fabrication, meanwhile, was overseen by New York-based blackwalnut. 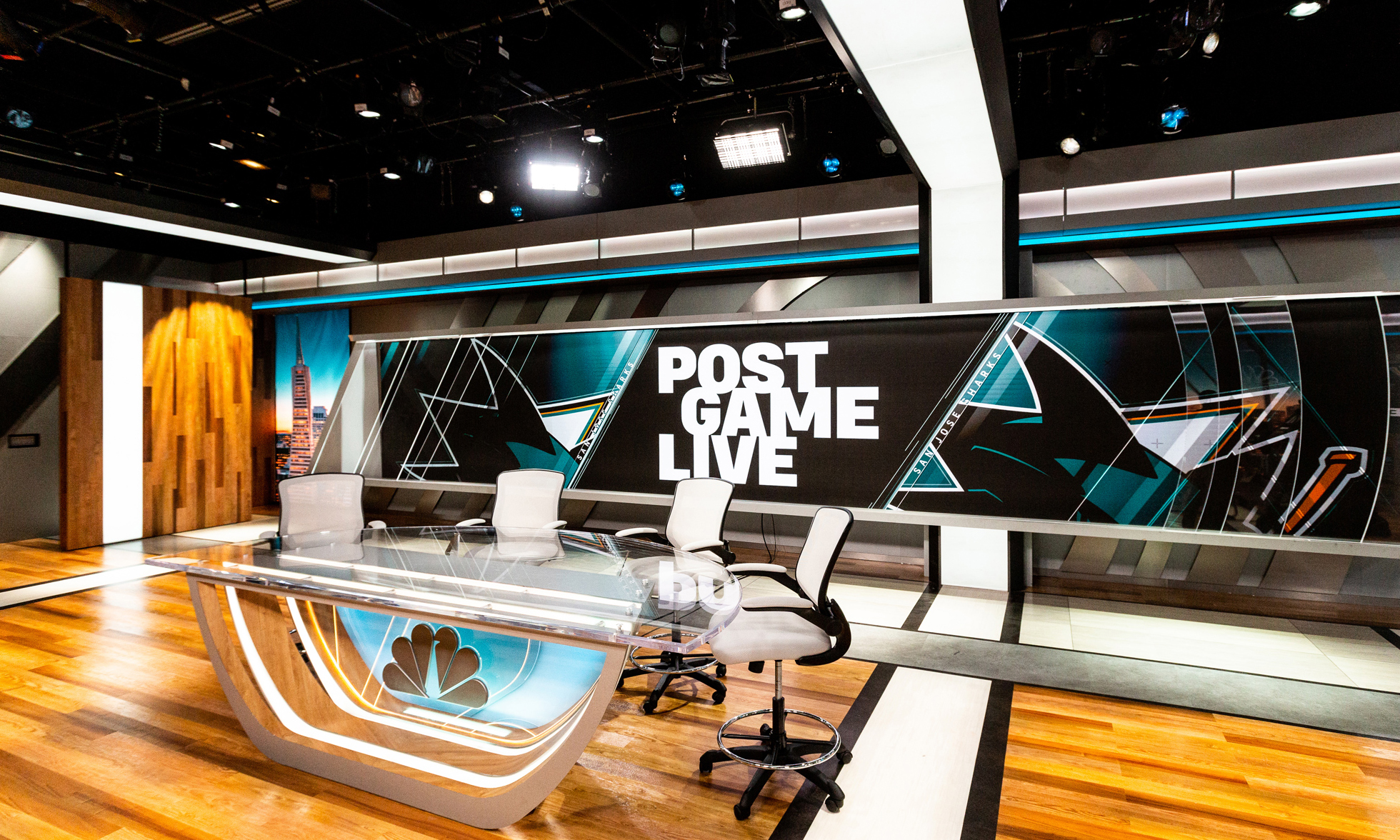 One look at the set and it’s clear the amount of work that’s been assigned to the network’s internal graphics team. The goal is to fill the set regularly with vibrant and dynamic graphics, player images, sprawling cityscapes, and more to keep the set constantly changing in color and feel based on the given topic being discussed on set. This studio is one of the first in the industry (NBCS Philly also has it) to leverage ChyronHego PRIME Display Matrix Studio Wall technology. It’s also required an extra graphics operator to be positioned in the control room with the primary focus of navigating the rapidly changing look of the set.

At the start, the network has established three primary shooting positions for its talent to use. There’s the main traditional anchor desk, a standup position that features a pair of monitor walls for throws to prepackaged segments or digital content, and a seated conversation area for more casual breakdowns between on-air talent. Schofield also noted that he’s excited to see the 30-ft.-wide LED wall in action, as not only does it provide a stunning backdrop for the desk, but it’s designed in a way where talent could walk the length of the wall and reference rapidly changing videos, images, and graphics along the way.

“Our new studios will provide our anchors, analysts, and insiders the ability to provide the region’s most comprehensive, informative, and entertaining sports coverage across multiple platforms,” Matt Murphy, SVP and General Manager of NBC Sports Bay Area and NBC Sports California said in an official release on Friday.  “We’ve created a world-class facility that is designed for innovation and the creation of compelling content for local sports fans. We’re looking forward with great excitement to tomorrow night’s first broadcast from the new studio.” 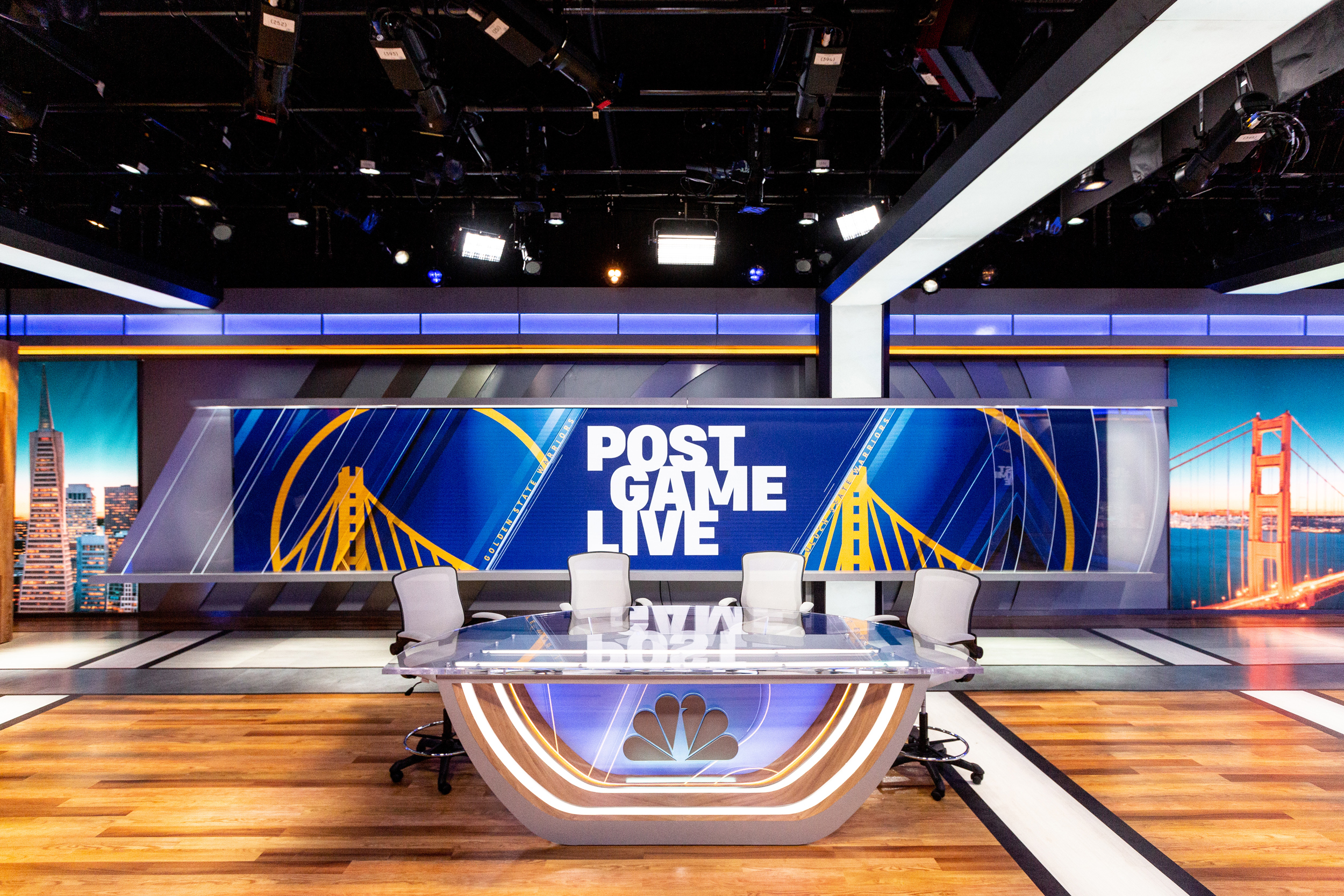 The studio features a a 30-ft.-wide LED monitor wall that sits behind the primary anchor desk position.

Lighting is also a major focus of this set. Back when NBCS Bay Area built its previous set, LED lighting technology was not as prevalent in the business as it is today. This set is all LED, leading to not only a brighter, airier look but a more efficient and greener facility. Schofield also pointed out that the studio changes the network’s color temperature from a Tungsten 3200-degree color temperature that establishes more an evening feel to 5600-color temperature associated with midday daylight. “That is really driven by the monitors, he says, “so that they can pop.” Lighting Design and installation was done by The Lighting Design Group with LED technology provided by Leyard and Planar.

One major bonus for the engineering and operations team is that not a whole lot of infrastructure needed to change within the studio’s control room where the switcher, graphics, playback, router, and comms all remain in place. Even the cameras out on the set remain the same. It was only a year ago when the network installed Sony’s ELC-MVS01 system for automation in both of the network’s two control rooms. At the same time, they upgraded their switcher in Control Room B to the Sony MVS-8000X production switcher and installed new Calrec Summa audio consoles. In July, the network replaced its internal asset management system with the Sony Media Backbone Hive. That helps streamline and unify content storage and use across the entire facility, including the control rooms and the newsroom.