Fox Sports’ college football coverage is bigger than ever this season, and it doesn’t get much bigger than this week’s Red River Showdown at Cotton Bowl Stadium. In addition to its typical massive production complement for the Oklahoma-Texas rivalry game in Dallas, Fox has rolled out an onsite set and the full cast of its Big Noon Kickoff show to the State Fair of Texas for a special two-hour pregame show on Saturday. 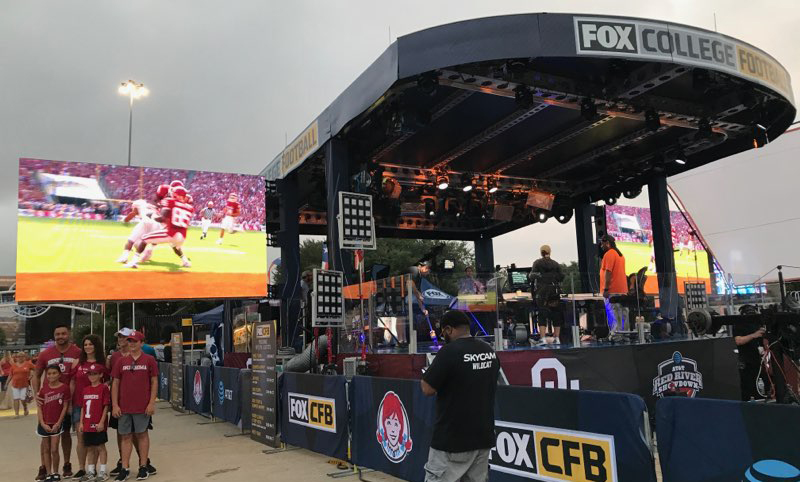 “The Red River Showdown on Fox is big game at a big event at a big location, and for us, it’s a big show on a big stage throughout all of our areas at the State Fair,” says Dave Jones, director, technical operations, Fox Sports. “All Fox entities are linked together, based at the studio stage for pregame, halftime, and postgame. We want people to see Fox Sports at its highest level.”

A Day at the Fair: For Fox Sports, Everything’s Bigger in Texas

The studio is located on Lone Star Boulevard between the Texas Hall of State and the Esplanade. In addition to the Big Noon Kickoff show on Saturday, Fox has a large presence of activations at the Fair with Fox Sports Digital and Fox News’ Fox & Friends and Fox Nation working in many areas with sponsors Wendy’s and State Farm.

“All our high-profile games get extra attention, but the Red River Showdown is special due to the rivalry and history,” says Jones. “Playing this game and working at the historic Cotton Bowl Stadium during the State Fair of Texas adds to the energy and atmosphere. It’s a great setting with the original corn dog and a lot of fried food.” 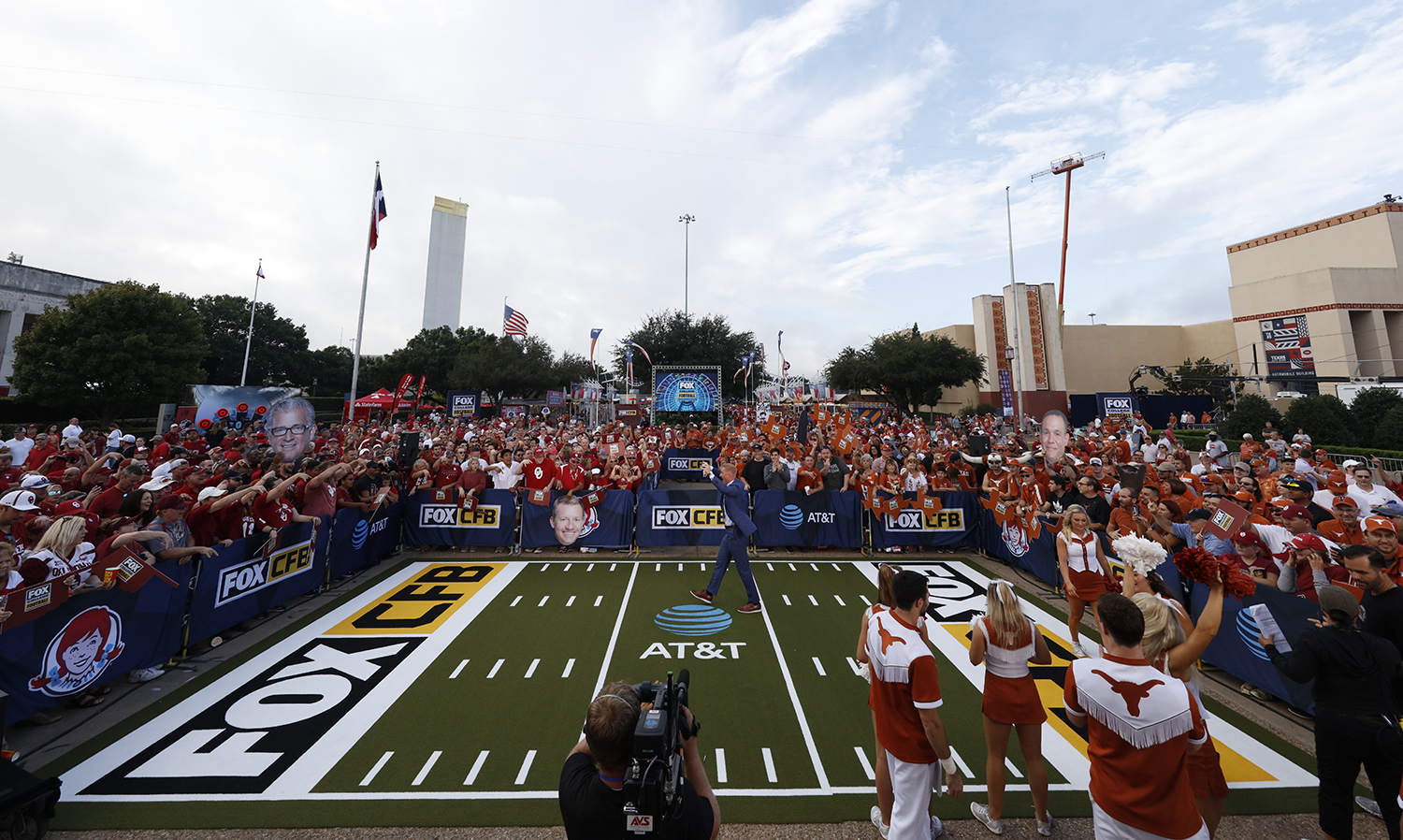 Fox Sports is once again on-site in Dallas for the Red River Showdown (Photo from 2018 by Aaron M. Sprecher)

Fox is using its new open-air college football set (developed by Filmwerks), which incorporates a 180-degree open look that allows the network to capture a variety of background shots without obstructions. The set is equipped with customized right- and left-flanking LED screens, incorporated right into the frame to allow the best use of space in a crowded environment.

“Being in the heart of the fairgrounds brings many logistical challenges,” says Rod Conti, VP, Technical Studio Remote Operations, Fox Sports. “Our set was specifically designed to work into this tight space. Our customized LED screens are supported with one-of-a-kind hinges that retract during off-air hours, allowing us to fold the back during the fairgrounds parade and pedestrian flow.”

Fox is leveraging Game Creek Video’s Apollo truck on-site at the Fair, which Conti says works perfectly in the small footprint allocated in the center of fairgrounds.

Fox has deployed a Skycam point-to-point system supported by a 134-foot crane to provide scenic overhead shots of the set and fairgrounds. A StrataCrane is also used to capture the ambiance of the Fair and the excitement of the Oklahoma and Texas fans on hand. 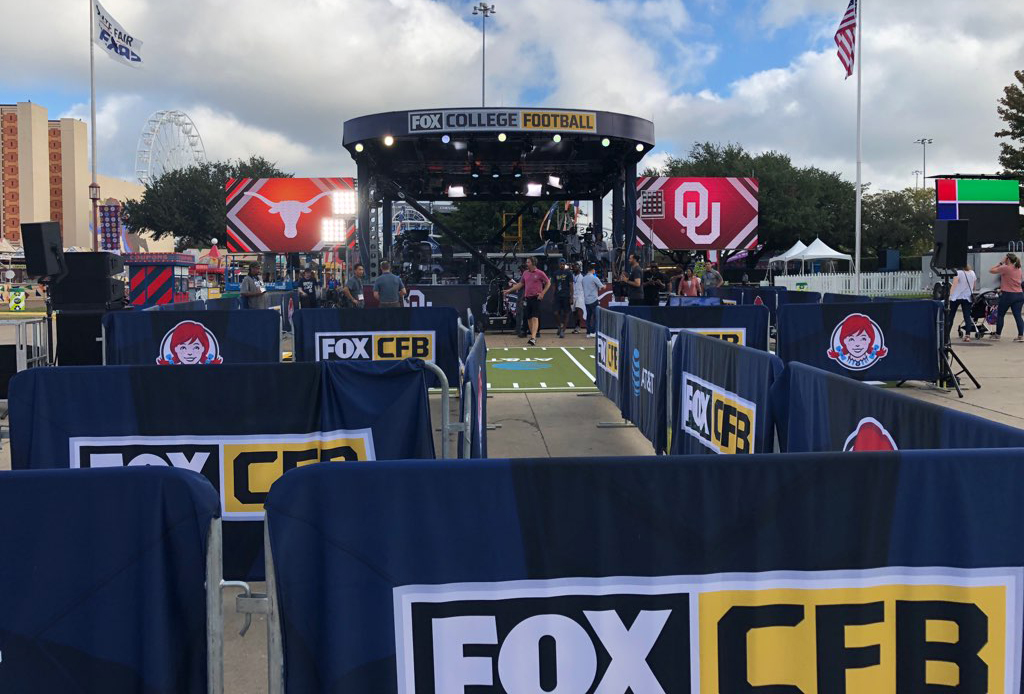 The State Fair of Texas will open its doors at 7:00 a.m. CT Saturday, allowing fans to be in position early for the pregame show. Building such a setup during Fair hours also brings with it some challenges. Off-hour builds and deliveries must be coordinated to work with the fairgrounds’ long open hours.

“We have a great relationship with the State Fair of Texas, which completely supports our presence and makes this challenge workable,” says Conti. “As far as show hours, our crew and fans alike enjoy the working setup. Excitement around Fox’s national coverage starts at the get-go, reaching a crescendo by the start of our televised broadcast, this year at 10:00 a.m. ET.”

This marks the second consecutive year Fox has brought its college football pregame show onsite to the State Fair of Texas for the epic rivalry game. And, this season, Fox is also