2019 TranSPORT: Broadcasters Lay Out Vision for UHD, 5G, and At-Home

The 2019 SVG TranSPORT event last week began with a panel discussion featuring representatives from CBS, ESPN, NBC Sports Group, and ESPN. They discussed a wide range of topics as the nature of signal transport moves well beyond backhauling a single feed from a remote venue to a broadcast center. Below are some highlights and key takeaways from the session. 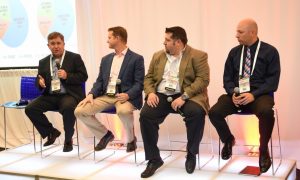 Transporting more than just linear signals is a game-changer.

Adam Whitlock, associate director, remote traffic operations, ESPN, reported that, with a lot more connectivity in place, ESPN has adapted and now uses that connectivity for things other than linear signals, such as file transfers. The challenge is, the connectivity providers are increasingly crucial to a successful event and, therefore, need to have a major presence onsite to solve problems quickly.

File transfer requires pipes of up to 2 Gbps, even with file acceleration. And it isn’t just video and audio being moved. Data transfer increasingly is a big part of the demand and is often the first thing production personnel ask for onsite, according to Chris Connolly, senior director, transmission engineering and operations, NBC Sports Group.

Relying on public internet for signal transport is on the rise.

Paul Spinelli, director, engineering, Sinclair Broadcasting Group, said that public internet is growing in importance to his company, especially when it comes to lower-tier events or bonus coverage on OTT services. As the opportunity presents itself, he added, it will increasingly be used for primary distribution.

David Chilson, director, broadcast distribution operations and engineering, CBS: “Extended coverage is a great place for transmission over the internet. Usage of the public internet is up quite a bit, but so is the number of events and hours being covered.”

Monitoring a multitude of signals along the entire path to delivery to consumers has led to big struggles with those signals now going to so many places, types of devices, and platforms. There is still no perfect solution for easily monitoring content in a multiplatform world, but it needs to be addressed.

The convergence of broadcast and IT requires new mixes of people and tech onsite as well as more collaboration.

Chilson said that the size of the IT team at a major sports event can sometimes be multiples of that of the traditional transmission team. Spinelli added that there is a need for knowledge transfer across those departments, with IT and video engineers working together. And it’s not just about staying on-air: it’s also about ensuring that best practices are followed to keep operations secure from attacks. Collaboration is important, said Connolly, to make sure everyone understands the risks and works with the others.

New remote-production workflows like REMI, at-home, etc. will only continue to grow.

“Ours is continuous,” said Whitlock of the learning process and evolution around ESPN’s REMI productions. “Our dedication to centralized productions has not wavered, and we have become wiser, thanks to wonderful partnerships with transport vendors who have supported us as our requirements grow.”

Connolly said NBC’s investment in at-home efforts is focused a lot around international events like the IAAF World Championships, recently held in Doha, Qatar, and next year’s Olympic Games in Tokyo. Yes, there are cost savings, such as not having to travel as many people or rent a truck and facilities, but there are other benefits as well, such as making it easier to enhance a production with second feeds or early feeds.

The role of 5G is a work in progress.

Chilson said he is looking forward to 5G, which will be another service that provides additional utility to professional broadcasters. “We can take advantage of 5G if it bears fruit, but it is still early,” he said. Connolly added that it also could help with quality of service, and Spinelli said it will be interesting to see how it evolves and is deployed by various entities.

UHD and 4K are exciting, but the focus is still on the signals that pay the bills.

“This is the most excited I have been since HD,” said Whitlock of the recent ESPN efforts around UHD. “The SDI production looks really good at home, but, in UHD and 4K, the granularity is awesome, and even the downconverted signal looks great. But we very intentionally make sure the core HD audience is not compromised.”

Connolly noted that NBC Sports’ coverage of University of Notre Dame football in 1080p HDR has also been great but that the production focus is still on HD viewers. But, as more and more rights contracts are renewed and the industry moves to IP, he thinks UHD programming will increase.

Chilson added that broadcasters are caught in the middle, still trying to figure out a pathway to the home because they often have older infrastructures. “But UHD is the future, and 4K is inevitable.”