NBA 2019 Tipoff: Turner Sports Rolls Out Inside the NBA Onsite for Opening Week

Turner Sports tips off the 2019-20 NBA season in style this week with a pair of high-profile NBA on TNT doubleheaders, including opening night at the Staples Center in Los Angeles tonight and a visit to the recently opened Chase Center in San Francisco on Thursday. TNT’s Inside the NBA studio show, which celebrates its 30th anniversary this year, will also hit the road with live onsite productions from L.A. and San Francisco. 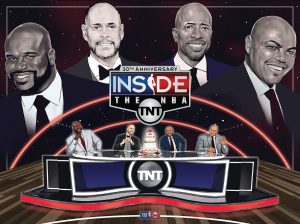 “We are blowing [opening week] out this year even more than we have in years past,” says Turner Sports Coordinating Director Steve Fiorello. “We’re also excited to be celebrating the 30th anniversary of Inside the NBA, so we have [onsite] activations near the set with props and set pieces from our 30 years doing the show, and we’ll be highlighting that with features during the show. It’s definitely one of our biggest [opening weeks] ever.”

As for the rest of the season, Turner Sports will use NEP’s new SS8 IP-based mobile unit as one of its two primary trucks this season and has ramped up its complement of high-speed cameras for game coverage.

“We’re very excited to be in Supershooter 8,” says Chris Brown, VP/sports production technology and operations, Turner Sports. “For me, the notion of working in a fully IP environment is very exciting, and I know that the production team is also thrilled with all of the bells and whistles that come with a new truck. It was definitely a fun and collaborative process bringing this truck to life.”

TNT’s Premiere Week begins tonight with a bicoastal doubleheader featuring the World Champion Toronto Raptors hosting the New Orleans Pelicans at Scotiabank Arena followed by the L.A. Clippers and L.A. Lakers at Staples Center. The night tips off at 5:30 p.m. ET with a 2.5-hour Inside the NBA pregame show from L.A. Live outside the Staples Center, which will integrate live coverage of the Raptors’ ring ceremony and live look-ins from the Jurassic Park facility in Toronto. A performance by multiplatinum recording artist Halsey will also be incorporated throughout that night’s coverage.

“We’re taking over all of LA Live and are completely embedded here in L.A.,” says Fiorello, “but Toronto will also be a big part of our show, with the ring ceremony and [reporter] Dennis Scott doing live hits from Jurassic Park to capture the vibe going on out there.” 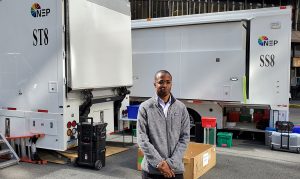 This year’s roadshow activations include the Inside the NBA 30th Anniversary Experience, where fans can see props from the show and pose for photos at a desk from the show’s set. As part of the experience, fans can get virtual side-by-side access to TNT commentators through a volumetric 3D experience powered by AT&T 5G.

NEP’s TS2 (A and B units) is on hand in L.A. to handle the game, and NCPVII (A and B) is handling the pregame-show production. Meanwhile, Supershooter 22 is producing live coverage from Toronto. Turner has also rolled out dedicated production facilities for its digital-production teams to create content for Bleacher Report, House of Highlights, and social media. With so many trucks onsite, Turner opted to locate its production compound on Figueroa Street between LA Live and Staples Center.

“Every time Inside the NBA comes out on the road, it presents its own unique set of challenges,” says Brown. “But doing it at Staples Center at one of the busiest times of year makes it even more challenging. Between the game, the studio show, the road show, the live concert, and our social teams, what is typically a two-truck A/B-unit show suddenly turns into a six-truck extravaganza.”

Inside the NBA shifts to San Francisco on Thursday, where it will be live from the Chase Center starting with a pregame show at 7 p.m. and throughout the night’s doubleheader featuring Milwaukee Bucks–Houston Rockets and L.A. Clippers–Golden State Warriors. Inside the NBA’s set will be located just in front of the massive outdoor videoboard and spacious seating area outside the arena’s main entrance.

“We’ve situated our set to take advantage of outdoor area and seating they have at the front of Chase Center to showcase the new building,” says Fiorello. “Anytime we’ve done an outside set, it’s usually just standing-room–only. But this is more like an amphitheater setting, where fans can actually sit and watch our show.”

The Turner Sports team got a sneak peek at the Chase Center during a preseason Warriors-Lakers matchup on Oct. 5, but Thursday marks the first regular-season NBA game to be produced at the state-of-the-art new venue.

“We were fortunate that we did have a preseason game there, but, at the end of the day, it’s always a significant challenge being in a brand-new building, especially for a [production] of this size,” says Brown. “The good news is that it’s a phenomenal building. And we’re excited to have the opportunity to be the first to showcase the building the way that the designers had originally envisioned in terms of having the studio show and activations out on the Plaza in front of Chase Center.”

SS8 Debuts to Rave Reviews
NEP’s newest IP-based production truck, Supershooter 8, will team with TS2 to serve as the NBA primary mobile units this year. Supershooter 8, which debuted for Turner during its MLB postseason coverage this month, will work East Coast games through the end of this year and then transition into the NBA on TNT’s primary West Coast truck. 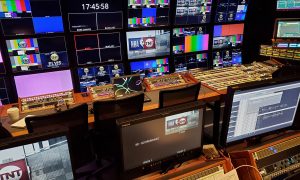 Brown explains the move: “Having a fully integrated IP facility is going to allow us to start exploring the connectivity between remote site and [our broadcast center in] Atlanta for [at-home] production. And obviously — not that we have any specific plans as of now — it also opens the door to 4K or 1080p HDR production. We don’t know exactly how this is all going to play out, but the good news is, we can at least start having those conversations now and get everybody thinking about what we want to do in the future.”

“One of the things we’re most excited about is advancing to the new EVS VIA platform,” says Brown. “It allows us to begin the migration work in terms of connectivity, so we’re getting a little bit of a leg up on the future.”

In addition, he says, Turner has boosted its number of high-speed cameras on the court to three on every game (from two last year) and will upgrade its Above the Rim cameras to Sony HDC-P43 slo-mos for selected games this season.