Increased use of Skycam and GREMI model round out enhancements

After a postseason in which the Toronto Raptors became the first non-U.S. franchise to reach the summit of the NBA mountain and lift the Larry O’Brien trophy, ESPN is launching the new season with a doubleheader featuring a pair of Eastern Conference rivals (Boston Celtics at Philadelphia 76ers, 7:30 p.m. ET) and two Western Conference heavyweights (Denver Nuggets at Portland Trailblazers, 10 p.m.). This year, nearly 100 of the network’s regular-season telecasts will be transmitted in 1080p for the first time ever, and high-profile matchups will feature technologies like the Skycam, high-speed cameras, and robos. 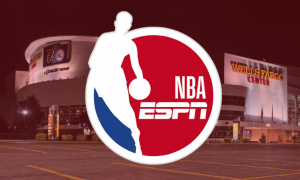 “Everyone is excited to jump into the regular season,” says Patty Mattero, senior operations manager, ESPN. “Starting tonight, we will be incorporating new technologies and workflow, but one of the big highlights for us is focusing on producing all of our games in 1080p.”

The Leap to 1080p: Making the Necessary Changes

With this technical adjustment, all of ESPN’s primetime packages will feature 1080p (Monday Night Football has done so for several seasons; Sunday Night Baseball, since late in the past regular season). With a new way of delivery comes a period of transition. And, for a sport that is constantly moving from city to city across the country, with the occasional trip north to Canada, some logistics need to be ironed out to ensure a successful production.

“The challenge for all of the transition is that, for the NBA, we’re a one-day set shoot,” says Eddie Okuno, senior remote operations specialist, ESPN. “We have multiple trucks, and we have to make sure that all of the hardware, EVS units, and our file workflows are compliant and can handle the capacity of 1080p. We’ve vetted through all of that and also all of our transmission needs. Obviously, 1080p bandwidth is larger, and we’ve had to go through and vet through all that, too.”

For this new transmission venture, ESPN will recruit a bevy of production-truck providers. Throughout the season, NEP will serve as primary vendor with its EN1, EN2, and EN3 units. For some major matchups, Game Creek Video’s Victory, 79, and, occasionally, brand-new Bravo will be in the compound. These trucks will deploy additional EVS XT4K replay servers to compensate for higher channel density.

Summer League Success: Skycam Returns to Mainstage After Trial in the Desert

In the offseason every year, the NBA tests the merit of new and emerging technology during the NBA Summer League in Las Vegas, which has birthed many of the league’s most exciting storytelling elements, such as the Skycam view in 2018. After some routine runs during primetime games, including the day-long affair on Christmas Day, the production team envisions an even bigger role for the aerial camera system in the upcoming season.

“The return of Skycam was successful during Summer League,” says Okuno. “Once we launch the season, you’re going to see a lot more of it during our regular-season games, which is going to probably begin with Christmas and [continue] into our Saturday-night primetime games [on ABC].”

With the decision to move operations to 1080p settled, Okuno and Mattero used their time in the desert as well as with other ESPN properties to test their standard equipment within the new production framework.

“We needed to replace a lot of our telestration and strategic devices because [they were] not 1080p-compliant. We’ve been working with Vizrt Libero units as well as looking into what we used during the WNBA finals: the Viz Arena,” says Okuno. “Some of the technologies that we have been testing throughout the offseason, Summer League, and WNBA may make an appearance. Since our telestration, strategic, virtual, and overlay devices were not 1080p[-compatible], we’re making the transition, educating ourselves, and getting ready for this upcoming season.”

Upping Their Game: 1080p Calls for More High-Speed Cams, GREMI Workflow
The camera complement is another aspect of ESPN’s NBA broadcasts that will see some adaptations due to 1080p. Although an abundance of high-speed cameras is customary to capture the razzle-dazzle of the league, these products will be elevated to a higher tier.

“Our camera complements are 3G level A, so everything is a [Sony HDC-]2500 or 4300,” says Okuno. “Our ABC games will average two or three high-frame-rate cameras for our highest-ESPN-level games and have up to six 2500’s.”

As in previous seasons, the network will deck out the venue with other specialty cameras, including new Marshall CV503 POVs and Fletcher ATRs, robotics, and Dream Chip ATOM one POVs.

Offsite help will continue to be important in a majority of the network’s games. Last season, the frequently used GREMI model saw an uptick on telecasts for on-air graphics, and, as equipment within the truck increases in 2019-20, the offsite system will be a reliable support.

“It will have a larger role [since] our EVS operation could increase on some selected games,” Okuno adds. “We’re making our Vizrt Liberos GREMI-controlled as well.”

Quick Change: ESPN Commits to Innovation Despite Shifting Storylines
The NBA is known as a league that never accepts stagnation from a production perspective. Similarly, ESPN refuses to remain comfortable with its broadcasts year after year.

“On our NBA package, it has never been rinse-and-repeat from one season to the next,” says Mattero. “We’ve always looked for new ways to innovate and keep everything fresh on our technical and remote teams for all of the games. It’s a challenge, but it keeps things exciting.”

And, although plans are set for the entire season, the network is staying alert and flexible to make on-the-fly decisions at a moment’s notice.

“We need to enhance certain games if a storyline changes, so we look at our plan again and attack [a broadcast] differently,” Okuno explains. “The plan we start with this season usually never ends the same way by the time we get to the postseason since it mutates a few times.”