After more than a year of development, Turner Sports introduced an on-court virtual shot clock last night during its NBA on TNT opening-night coverage of the L.A. Lakers–L.A. Clippers at Staples Center. The virtual shot clock, developed in partnership with Vizrt, overlays a white shot-clock graphic on the floor between the foul line and the top of the key. TNT’s coverage continues to integrate the standard shot clock into its scorebug graphic in the lower right corner.

Turner Sports sees the new system, which will continue to evolve throughout the season, as a potential “1st and Ten line for basketball”. The broadcaster believes putting the shot-clock graphic directly on the court will allow viewers to focus on the ball and the action on the floor, instead of constantly shifting their gaze to the scorebug in the lower corner of the screen. 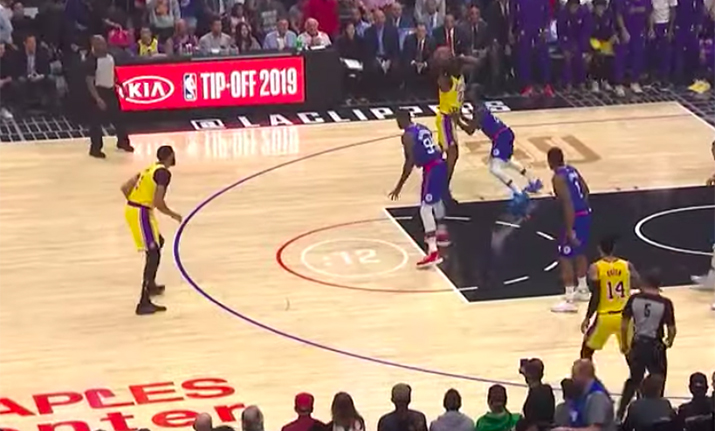 The NBA on TNT’s virtual shot clock features a white shot clock graphic overlaid on the floor just above the foul line at the top of the key.

The graphic is available on the main game-camera angle, and, thanks to advances in the technology, the Vizrt and Turner Sports operations teams are able to integrate the system into the overall game production and calibrate the camera in less than 20 minutes.

Turner Sports has been working with the NBA and Vizrt on developing the virtual–shot-clock system for more than a year. The system was tested throughout NBA Summer League this past offseason and at multiple preseason games, including the Pelicans-Knicks game at Madison Square Garden last Friday.

In addition, Turner conducted extensive research, hosting multiple focus groups that comprised hardcore and casual NBA fans, as well as heavy social-media users. Turner also conducted visual scans as part of these focus groups, tracking viewers’ eyes during the course of a basketball game. The findings revealed that viewers’ eyes, not surprisingly, bounced back and forth between the location of the ball and the shot clock in the scorebug graphic more and more often as the shot clock got closer to zero. Turner Sports believes that the on-court virtual graphic will alleviate this back-and-forth effect and create a more seamless experience for viewers.

Having launched the virtual shot clock last night on the opening night telecast, Turner will continue to tweak the element and hopes to make it a permanent fixture of its NBA broadcasts moving forward.