When MetLife Stadium opened in 2010, it was billed as both the most expensive stadium ever built and the most technologically advanced sports venue in the world. It had the largest video screens seen in stadiums at the time — 40,000+ sq. ft. by Daktronics — and it boasted a JBL concert-level line-array sound system. Less than a decade later, the venue has undergone a significant update of its audio infrastructure, with the original CobraNet audio-routing system replaced by a Dante network.

The update underscores the fact that, even as the concrete is setting at major-league sports venues that routinely top the $1 billion mark, the AV technology within them is already evolving. 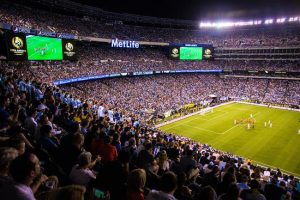 Not yet a decade old, MetLife Stadium has replaced its audio-routing system with Dante networking.

The $1.6 billion venue, originally named the Meadowlands Sports Complex before MetLife acquired naming rights in 2011 and home to both New York NFL teams, the Giants and the Jets, had undergone a number of tweaks to its systems since it opened, including AV routing and control updates. But the landscape has shifted considerably for audio distribution in that time, says Kevin Henneman, president, KMH Audio-Video Integration, which did much of that work in the past four years and integrated Dante audio networking last spring.

“Twenty years ago, the lifespan of a typical router was 15 years,” he says. “Now you can expect to get five to seven years out of most equipment like that.”

That’s not an indictment of equipment quality but rather an acknowledgement of accelerated evolution in AV technology — first, as a result of the shift to digital and, more recently, with the migration to IP and networked modes. But faster product and technology cycles mean that venue operators and the integrators they work with need to make choices that may not be as permanent as they once might have seemed.

For instance, Henneman says that, after the venue commissioned KMH to do a technology evaluation of the existing audio-distribution system, it was clear that the CobraNet system, whose use has declined in the U.S., needed to be replaced. Several options, including the AVB protocol, were considered, and Dante was selected because of its ubiquity in the sports vertical. 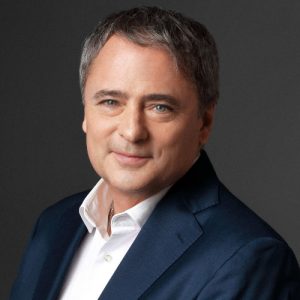 “We looked at [the stadium’s] workflow and compared it to what we’ve seen being done elsewhere,” Henneman says. “We recommended that they centralize their control and management of signals and recommended the Dante system, in part because it moves them further into the ST 2110 world.”

The venue’s Cat 5e cabling was sufficient for its needs into the foreseeable future, so the Dante update focused mainly on replacing various key endpoints and hubs, such as the FOH console, wireless microphone systems, and various DSP processors. Several existing components —the Crown amplifiers, for example — were already Dante-compatible or could be updated to be. The end result, says Henneman, is better and more centralized control of the audio throughout the stadium, from a single, easier-to-use software-based GUI.

“For instance, they can now do replays from the Evertz system to any screen in the stadium from the main control room,” he says. “And a single operator can control the entire system. Plus, they have a far more resilient system that can better survive failures.”

Henneman says he’s already in discussions with other venues about this: stadiums and arenas built in the past decade or so, just as the protocols and platforms for networked AV were being formulated and productized. They are the Gen X of venues, conceived at the end of the analog era and needing to be reschooled for the IP epoch.

“The technology is moving very fast now,” he says. “You try to budget and plan, but you’re doing so with a snapshot in time. It’s hard to know what it’s going to look like 10 years from now.”