Meeting in Los Angeles for the second consecutive year, the SMPTE Technical Conference and Exhibition once again plowed the trenches of nitty-gritty technology, dissecting such subjects as ATSC 3.0, 8K, and improved security measures. 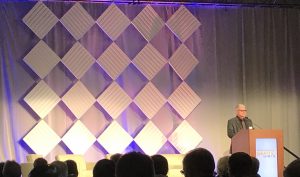 “SMPTE’s mission,” he said, “is to drive the quality and evolution of motion pictures, television, and professional media. Our conference is one of the ways society offers education, so that we can stay ahead of emerging technologies and receive cutting-edge information that can be used to advance our expertise.

Through a Crystal Ball: Keynote Defines the Path Ahead

The future can only be predicted, but, based on practices currently being used, the community can concoct educated approximations and hypothesize scenarios of what tomorrow will look like. Helman alluded to the ways technology is constantly changing and promises no period of rest, according to his research into what to expect over the next 10 years. He cited the use of real-time engines and updates to the cloud to allow easier accessibility as pointing the way toward 2030.

“Our goal is to always enable better storytelling and see that live-scale distribution is preserved,” he said. “All of these [innovations] are coming together to create a transitional point where we have an opportunity to shape the future of production in a way that benefits the entire community.”

His research included input from high-profile movie studios that have a global impact: Walt Disney Studios, Universal Studios, Warner Brothers, and Paramount. With their help, he said, this preliminary study is only the start of an effort that will need participation from the entire industry.

“This is not something that we will be able to do on our own,” he noted. “We need to engage with the whole community in order to get there, and that includes studios, postproduction and video-effects houses, tool vendors, and cloud platforms. [This study] is a pulpit for the industry to move things forward.”

The rest of Tuesday’s slate led off with the Making It Real track, which was all about ST 2110 and offered talks on securing ST 2059-2 PTP networks, AMWA IS-07, and how to deploy the standard in a large-scale IP live-production facility. Near day’s end, another track examined how the cloud is altering transcoding, media-creation platforms, and retransmission protocols.

On Wednesday, the top of the day’s agenda was jam-packed with all things security and how to better protect ST 2110 systems. Later, ATSC 3.0 was the focus, with discussions on OTT’s ability to match the quality of linear broadcast, where IP fits in a single-frequency network, and a breakdown of an ATSC 3.0 delivery network.

In a more cinematic vein, Thursday’s program kicked off with an out-of-this-world presentation. Noting the 50th anniversary of the lunar landing, creatives reflected on the shot choices implemented in the recent Apollo 11 documentary and how footage shot in 1969 was restored to appease a modern viewing audience.

A highlight of the astronomical portion of the day came with a successful test of streaming capabilities from space. In a collaboration between AWS and NASA, the deployment enables high-quality live video transport via resources up in the cloud. The proof of concept marked the first time that cloud resources were used in this way.

At the end of the final day, Apple co-founder and industry legend Steve Wozniak was on hand to introduce the newest class of SMPTE Fellows during the SMPTE Awards Gala.

Vendors and Manufacturers on the Exhibit Floor
As attendees participated in the think tank of sessions, more than 80 tech vendors showcased equipment that could not only improve the conditions of their broadcasts but also help solve some of the problems discussed. Along with these vendors, SMPTE offered a booth named “2L-4K-8K Can You See the Difference?,” inviting visitors to try to distinguish the characteristics that set each resolution apart from the others.