The profusion of mics are part of fully networked infrastructure

Fox Sports has redefined the notion of immersive sound for baseball, covering the field (and sometimes the players) with a small army of microphones, from lavs buried at the edge of the infield and on the base bags to parabolic reflectors picking up key sounds like bat cracks, catcher’s mitt pops, and even batters knocking the dirt from their cleats.

When the World Series opened in Houston’s Minute Maid Park on Tuesday, all those microphones were played by Fox Sports’ longtime MLB audio magicians, A1 Joe Carpenter and submixer Bob Qua. 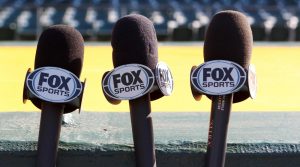 “We’ve been learning over time what works best and what has been less effective,” says Carpenter. “For instance, the mics around the pitcher’s mounds are really excellent for getting the sound of the pitchers releasing the ball. The grunts you hear are pretty amazing; you can hear the exertion of the pitch. We also got a lot of good stuff from the mics we had planted at the edge of the infield. You could hear the infielders calling for the pop-ups.”

The basic schematic for the postseason Hydra network shows a sixth Hydra added on the third-base side in Minute Maid Park to accommodate a RF-receive position closer to the infield ground mics.He and Qua also relied heavily on the parabolic microphones aimed at the home plate area, which provide a reliable foundation for effects when it’s uncertain whether players or umpires will wear lavs for a particular game. Qua says that they never know until game time whether players, coaches, or umpires might agree to wear a mic.

“We definitely lobby for it, but it’s not our call,” he says. “But it’s great when you can get the third-base coach on a wire and hear him on the replay send the runner home. That’s really exciting.”

One thing new for this Series is that the main and effects audio consoles — a Calrec Apollo and Brio, respectively — and the microphones will be connected via a Calrec Hydra network, with six Hydra stageboxes planted around the venue. It’s the first time the entire audio infrastructure is on a network and not using any copper cabling.

Depending on the stadium, there are three Hydra boxes covering left, center, and right fields and one near third base for the wireless parabolics there. Qua explains that Q5X’s waterproof AquaMic transmitters need to be as close as possible to the infield, pitcher’s mound, and home plate in-ground microphones, since the dirt around their antennas can impede the signal. He adds that the shift to a fully networked infrastructure also helps with managing the microphones.

“Joe and I can each patch anything using the Calrec GUI without first having to send them to each other,” Qua says. “Before, we used to have to put it on DT copper or a MADI stream. Now we each have the same [network] permissions.”

Turn Up the Volume

The microphone array may be tried and true by now, and a networked infrastructure has gained the trust of most audio professionals at this point. But the X factor for baseball games is often the stadium itself, especially with loudly partisan home-team crowds during championship games.

“The sound inside the stadium is incredibly boomy, to the point where sometimes the PA will generate a two-second-long standing wave,” says Carpenter.

His compensation strategies include rolling off the equalization of the crowd and parabolic microphones at about 240 Hz. However, that creates some collateral issues, such as deadening the sound of the bat cracks and mitt pops, so he’ll use a higher Q value, a way of applying very specific EQ in a very narrow bandwidth range. 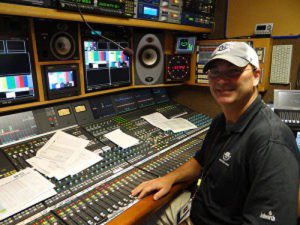 Fox A1 Joe Carpenter: “We’ve been learning over time what works best. For instance, the mics around the pitcher’s mounds are really excellent for getting the sound of the pitchers releasing the ball.

“I actively manage the EQ much more than I would otherwise, spiking around 660 at 6 dB and a Q of 7, just for those moments, ” he says. “Sometimes, you’re looking at the EQ curves you set up for this [on the screen], and it’s hard to trust it because it just doesn’t look right. But then you hear it, and it sounds fine. It’s pretty intense.”

The parabolic mics handle much of that, but he might not be sure just how much until the game starts, since the area around home plate tends to have a lot of pregame activity, making rehearsals difficult.

“The first time I really get to hear it by itself is when we’re live on the air,” he says, although he was able to get a feel for the challenge during the ALCS games there.

Washington’s Nationals Park, on the other hand, is tame by comparison, with far fewer reflective surfaces. Its main challenge is the Viscount Sonus 60 organ installed in 2017, described by the Washington Post as “ultra-deep, bleacher-shaking.”

In fact, a growing trend in live sports coverage has seen noise levels inside stadiums and arenas increase exponentially on the logarithmic decibel scale. The NFL’s Arrowhead Stadium in Kansas City still holds the Guinness world record for that: a Chiefs-Seahawks game in 2014 registered 142.2 dB, putting the experience somewhere between standing on an operating aircraft carrier and standing 30 ft. from a jet at takeoff. But baseball isn’t far behind.

“It can be a challenge to get the balances right when it gets that loud,” says Carpenter. “You want to engage the fans, but that much noise can affect the broadcast sound. [Announcer] Joe Buck is always asking, “Is it me, or is the PA system really, really loud?’ It’s the PA system.”