The Nationals stunned the Astros this week, taking the first two games of the World Series in Houston. As the nation’s capital hosts the Fall Classic for the first time since 1933, Fox Sports’ broadcast promises to be anything but a throwback, instead pushing the edges on sports television’s future. 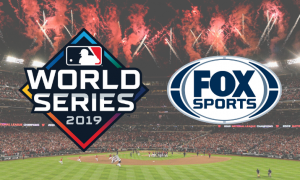 Most notably, the network is leveraging acquisition technology to advance image quality. Although the broadcast itself is being produced in 1080p HDR, Fox is deploying an 8K camera, the Sony UHC-8300, for super-crisp replays. Director Matt Gangl will choose where to position the camera, and replay operators will extract a 4K image to produce specialty replays. Canon is providing a prototype 8K lens to affix to that camera.

In addition, Fox is also utilizing the CJ15ex4.3B 4K UHD wide-angle lens through the entire series to support 4K-capable cameras. It marks the first time that model has been used anywhere in the United States.

“The picture is just spectacular,” says Brad Cheney, VP, field operations and engineering, Fox Sports. “Once again, Canon has brought us something in the postseason that’s really going to make a difference for all of us down the road. We’re always happy to partner with them on that. The new wide-angle [lens] has a little more zing to it, but it’s really built for 4K. So you get a little more light out of it, and it is popping really well. Especially [since] we’re doing a 1080p HDR broadcast, you really get to use all of that lens.”

The rest of the camera arsenal is impressive as well, with Fox sprinkling the stadium with 14 super-slo-mos (eight at 6X, six at 2X), two slo-mos (at 2,000 fps), two RFs, one RF stabilized MōVI stabilized RF, and one aerial.

On the replay front, keen-eyed viewers have noticed that 360-degree spinning replay provided by 4DReplay has returned, having been prominently used at the All-Star Game in July. The animation is developed by an array of more than 30 cameras from behind home plate and provides a cinematic, 360-degree view of swings in the batter’s box and pitches from the mound.

“These two teams are about pitching,” says Cheney. “So we are actually able to create a neat focus point that [viewers] have seen before, which was the mound. We’re covering with 4D Replay home plate, first base, and the pitcher’s mound right now to see what kind of different looks we can get, because this is a heavily pitching-dominated series. It has been good so far. We’re excited about the looks it brings.”

Flycam a Success at Yankee Stadium

Viewers of the American League Championship Series were treated to a unique camera angle for Games 3, 4, and 5 at Yankee Stadium. A Flycam was installed above the field and seating along the first-base line. It was a view of the venue unlike anything seen before.

“We thought the shot out of Yankees Stadium was amazing,” says Cheney. “It provided [viewers] unique views not only of the field but of the stadium and things that you normally wouldn’t get to see up close and personal. It integrated very well with the show, and we’re looking to see how we can continue bringing looks like that into our big-game coverage.”

Unfortunately, neither Minute Maid Park nor Nationals Park can currently accommodate the rigging that Flycam requires. So Fox will not be using that view again in baseball this year.

Fox Sports debuted this use of Flycam in Cleveland at this year’s All-Star Game.

Pleased With the Postseason
With a captivating ALCS under its belt, Fox is certainly rooting for this World Series to extend and return to Houston. Regardless, the operations team is pleased with how the entire month has gone.

“We’ve been really, really happy with everything that’s going on,” says Cheney. “We really upped the ante this year. When we moved the entire production to 1080p HDR, we knew that would mean adding some new basics to the group and also, obviously, relying very heavily on our key vendors. Every one of those groups stepped up — and mightily — for us to make sure that the production team didn’t miss a beat. I think that we’re probably the largest 1080p HDR show bar none at this point. We are really happy.”