2019 TranSPORT: How OTT Platforms Aim To Match the Quality of Linear Broadcasts

As the end of 2019 nears, cord-cutting is still a relevant topic, and the pay-TV route is seen as a viable option. With increased advances in the OTT space, the line between linear viewing and digital streaming becomes a little less noticeable. 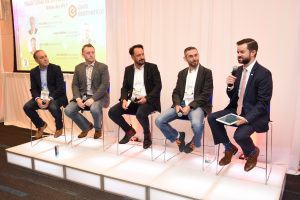 At the 2019 TranSPORT conference in New York City, industry executives on the front lines of this battle discussed ways in which viewability of a live stream can be enhanced to mimic the authenticity of a linear broadcast and how organizations can continue to navigate real-time problems in an evolving digital world.

Behind the Scenes Work

What we are really interested in doing over the next two to three years is establishing convergence between OTT and OTA with ATSC 3.0. I’ve been very active with our media team on the East Coast to support convergence between traditional OTT and next-generation distribution with ATSC 3.0, MMT, and an open-source framework to support all of the ATSC 3.0 standards. It’s a very exciting time and a great opportunity to take a look at how the industry is going to change and how we can help deliver a more successful product to market by delivering the content that audiences are interested in.

We’ve been creating a unified platform that started with entertainment and has expanded to sports to power all of the live streams associated with that. The big thing that we’ve been working on over the past year is rolling out 4K, so that started this year with the FIFA Women’s World Cup. We streamed 52 4K UHD games, and that’s extending to MLB with the ALCS in UHD and Thursday Night Football. We’re really excited to be one of the few places where you can get UHD football content right now in the OTT space.

We have moved most of our infrastructure to the cloud [for Thursday Night Football], so, when you’re talking about doing 4K encoding in the cloud, that has some additional challenges. You need a lot of more computing for that, more bandwidth to get the streams there, and, because it’s live, you’re still dealing with all of the challenges around latency.

TAG Video Systems CEO Abe Zerbib on developing fail-safe solutions
Besides being a technical issue, it’s a matter of establishing a culture. [Hypothetically], a broadcast engineer will plan the design with zero failure, while an IT engineer will know that it is definitely going to fail but will also know how quickly they need to repair it. We luckily work with both broadcast and IT engineers, so we understand the tension and anxiety of how to create these solutions. For broadcast media groups, it’s “fail fast, win fast.” It’s about needing to fail in order to learn for the next time.

Justman on altering the idea of personalized content
When [a user] has 15 minutes of downtime, the trick is how to take that two- to three-hour tennis match and tell a narrative story in that 15-minute time frame. Hyperpersonalization is not necessarily the answer; narrative personalization in the allotted time [is]. Maybe I have 17 minutes from when I leave my apartment to when I get to work: what can I engage, experience, and add value to the activities that I subscribe to? It’s about finding the right storytelling foundation to be able to personalize the content for the time, perspective, and coverage that’s there.

Endeavor Streaming SVP, Partnership Development, Phil Green on categorizing video material for the sake of the user
It’s about using the technology to solve business challenges. There are more than 1,200 OTT apps around the globe and 200 in the U.S. alone. How do you make sure you are increasing retention for these subscription products to get pay-per-view signups? A big focus for us is [not only] increasing the ability of renewal rates and how to fight piracy but also the piece about personalization. How do you personalize by device or by region in order to have smart personalization that is manageable?

Performing in the Real World

Green on the transition from the NeuLion property and the subsequent relaunch of the WWE Network
For the past 12 months, there has been a lot of fantastic change [coming] from our end. It started with our rebrand back in January, and, since then, our entire technology and product stacks and our communication internally as well as with our clients have improved by leaps and bounds. In addition to working with our existing clients, we’ve also brought new, big partners on board, such as UEFA and a bigger splash this past summer with WWE and the relaunch of the WWE Network. It was a massive undertaking to migrate their subscriber base and huge video-on-demand archive as well as to manage their three major live events during the summer (Summer Slam, Clash of Champions, and Hell in a Cell).

For the WWE, it was about moving over to a more flexible platform and rolling out different tiers of subscription since, originally, it was one price fits all. They’re [also] going to have the ability to download video to bring content with you, a more modern user interface, and a better overall video experience.

Ziskind on learning from streaming issues during major sports events
The Super Bowl is an interesting event because it has requirements that are a bit different from our typical broadcast. One of the biggest is that the advertisements are considered part of the content, so we end up approaching it as a bespoke event and also build things that can be used again for our platform as a whole. The thing that I find interesting is that the growth of OTT viewing is accelerating even more for the Super Bowl: Super Bowl traffic on OTT is growing about 30% per year. With the acceleration of OTT, supporting that amount of capacity is something that we plan for.

[With Super Bowl LI], we had a pretty big issue that happened in the fourth quarter; even with all of that planning, there was still an issue. So there was a lot of work that went into it after the fact to see what happened and identify lessons that we could learn from that to apply to other big events. Two things that stood out were no matter how much planning you do, things can fail, so it’s about having a contingency for that. The other thing that we saw was that the secondary stream we were running for Fox Deportes didn’t suffer the same outage, so [teams] should run a similar video pipeline that runs parallel to the primary one.