When ESPN was preparing to launch the ACC Network, one of the broadcaster’s most significant challenges was determining a way for the conference’s 15 member institutions to easily share video files with one another. ESPN’s media-asset–management group was already juggling the content-exchange needs for 14 SEC schools as part of the SEC Network, which launched in 2014, and this workflow was not sustainable with more than double the schools. With that tall task, ESPN began searching for a cloud-based media-asset–management (MAM) system that could serve 32 geographically diverse entities: 29 colleges, two conference offices, and ESPN itself. 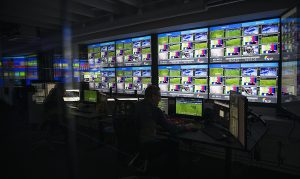 “This was a solution to a problem that we absolutely needed to solve: we have 32 entities that were trying to share video and files more efficiently,” says Rex Arends, senior director, remote production operations, ESPN. “In the past, it was all funneled through ESPN, so, if one school needed a melt from another school, ESPN would have to set up a feed and [transfer] it manually. We knew we needed to find a more efficient way, so we started to look for a cloud-based media-asset-management system that would provide accelerated [file-transfer] speeds and transcoding in the cloud [to provide] all the different codecs being used. That led us to NEP and Mediabank.”

ESPN had already had experience with the Mediabank product during its interactions as an international rightsholder with UEFA, which uses the system for its own media-management operation. However, the college conferences’ needs were quite different from other projects, so ESPN worked closely with the Mediabank product team to customize the system.

in a particular way,” Arends explains. “Without a cloud-based system like this, there really isn’t any way to make that happen.”

ESPN and NEP held a pair of seminars for the ACC schools in Bristol, CT, and for the SEC schools in Nashville to introduce them to the system and user interface. Then NEP sent out online forms requesting each school’s current requirements for codecs, delivery services, formats, and so on. With that information in hand, NEP set up templates for each school and brought all the schools online. 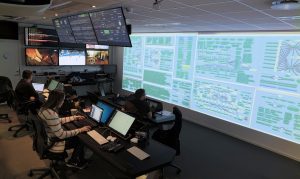 The system was beta-tested by ESPN and four schools from each conference during the month of August before going live across all 29 schools in September.

“With our 24/7-support help-desk team, we managed to onboard all the users at all the schools very smoothly,” says Mediabank Head of Sales Engineering Marius Borge. “Mediabank is a true software-as-a-service solution and is 100% cloud-based, which means that you don’t have to install any software [or hardware] locally. You work off a webpage accessible via the public internet, and that means that we could be very [agile] in deploying the service [for ESPN and the conferences].”

Inside ESPN’s Mediabank Workflow
Mediabank significantly streamlined the ACC Network/SEC Network content-exchange process, which was previously handled manually by ESPN’s MAM group in Bristol or Charlotte, NC. Each school is able to record melts, or highlight reels, from live games using the replay system of its choice — be it EVS, Evertz DreamCatcher, or DVSport — and send it directly into Mediabank cloud storage, where it lives in its native format. Through administrative rights, other schools (as well as ESPN and conference offices) are able to ingest that melt — either in its entirety or just clips — into their own library.

NEP and ESPN also worked with the schools to set up predetermined “M-Box” engines for each school, which automatically transcode files into the format and codec of their choice.

“It’s much less hands-on, and our [MAM] team doesn’t have to send everything [manually], which is where the efficiency is enhanced,” says Chris Strong, senior remote operations specialist, ESPN. “We are at the point where each school can see what everything they]re allowed to see in Mediabank and are able to pull it down in their native codec. And the M-Box workflows are already set up for each of the schools. Rather than a series of dropdown menus [to determine] format, codec, wrapper, audio, and so on, it has all been set up by ESPN, Mediabank, the schools, and the conferences, so it’s just a click of a button.” 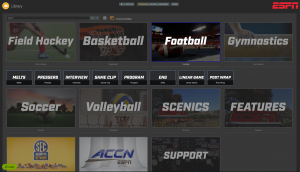 Although Mediabank doesn’t usually feature traditional file folders, NEP created a Collections View that merges all assets from a specific sport or school.

Users have the ability to view and edit clips in the cloud as low-resolution proxy files without having to download the full clip into the local library. As a result, schools can easily preview melts, choose the specific portions they want, and quickly receive the file via Signiant or Aspera high-speed file transfer.

“Everything that goes into the system is also created in a low-res [file],” says Strong. “And that low-res file will live in perpetuity, whereas the mezzanine-level file will eventually go into a deep freeze as it starts to age, which is a big efficiency in terms of storage. It could be restored years from now if needed. That alone is an incredible advance from where we were a year ago, and it’s just going to continue to improve.”

NEP heavily customized the ESPN account to serve the unique needs of ACC Network and SEC Network operations. For example, Mediabank created a Calendar View (very unusual in a MAM system) so that users can see all games taking place on a specific day. In addition, although Mediabank doesn’t usually feature traditional file folders, the team created a Collections View that merges all assets from a specific sport or school. Borge says this Collections View re-creates the visceral feel of folders without losing the dynamic flat structure offered by Mediabank.

“The amazing part of this setup is how a single system is serving the needs of several dozen disparate systems at different organizations, and they’re all working together on the same platform, which is Mediabank,” says Jay Deutsch, director, media solutions, U.S., NEP Group. “Just think about how many different functions and applications were used prior to [Mediabank] to make this all happen. That’s what makes this such an interesting project.”

All About the UI: A User Interface That Works for Everyone
According to Strong, the No. 1 focus in deploying the solution with Mediabank was keeping the user interface as simple as possible. Many of the ACC and SEC schools rely heavily on students with limited broadcast and production experience. In addition, many schools experience heavy churn when it comes to student and freelance crew, which means the Mediabank UI had to be simple enough to learn quickly and easily. 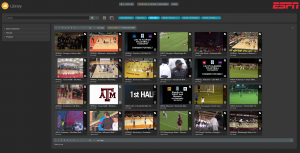 “The UI was very important to ESPN from Day 1,” says NEP Senior Account Manager Michael Pean. “What the Mediabank team has created is very slick. It has already evolved a lot over the last few months of working with ESPN and the schools to determine what’s needed for them to turn content around as quickly as possible. Between the Calendar interface, the M-Box ‘magic box’ setup, and all the other features, ESPN and the schools have many great bells and whistles to improve their [operation].”

The workflow has already significantly increased the output and efficiency for both the ACC Network and SEC Network production operations, according to Strong. “The true efficiency is the fact that there are just less touchpoints, ” he says, “so people can just do their jobs. Schools have the resources at their fingertips to bring clips directly into their session without having to physically record to drives or tapes and deliver them the way we used to.”

Looking to the Future: Plenty of Room Grow in Mediabank
Although Mediabank has transformed the way ESPN and the ACC/SEC member institutions share content, Strong says the system has the potential to streamline the operation even further. For example, Mediabank is focused primarily on managing the exchange of melts and graphics files, but ESPN plans to eventually expand to other media, such as iso camera feeds, historical content, audio files, and even spreadsheets and operations documents.

“The Mediabank platform is capable of so much more than we are currently using it for,” Strong explains. “We are really in the crawl phase of the crawl-walk-run plan while everyone gets used to it at their own speed. And I think that we will see, over the course of the remainder of this athletic year and into the beginning of next, that we will start to find more uses for larger parts of the tool to create even more efficiencies. In time, I can see a scenario where iso [camera feeds] are fed right down the line from school to school.”

Mediabank created a Calendar View for ESPN so that users can see all games taking place on a specific day.

Mediabank also features a rich API structure and plans to integrate with a variety of ESPN’s other systems. For example, ESPN and Mediabank are working to create more-robust fast turnaround and near-live functionality, including direct integration with ESPN’s Evertz DreamCatcher replay systems and the schools’ various replay systems.

“ESPN and the schools will be able to send files directly in and pull directly out from those systems. We plan to roll that out for ESPN soon,” says Borge. “We are already looking into live ingest scenarios and near-live operations, including more-direct interaction between the production truck and Mediabank. When you are in a live-production scenario, it will be very easy to search the Mediabank [library] and bring [content] directly to the production unit.”

The system has already been through seven releases since its launch in August and is being updated continuously, according to Borge, including new features introduced recently at IBC 2019, with plenty more on the way. With the SaaS model, users always have access to the newest functionalities and capabilities of the product.

“It has already created a multitude of efficiencies in everything that we do across all sports and schools that we cover,” says Arends. “Across the board, the schools have been thrilled with the product because it has helped get access to content much easier and much faster. And, from an efficiency standpoint in the [ESPN] plant, it was really a challenge feeding that video content back and forth. This has significantly reduced the number of [tasks] that our team has to manage manually. We plan to take that even further as we progress.”