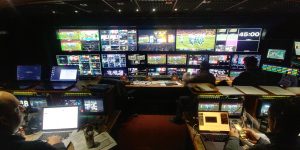 The broadcast control systems have been installed across TNDV’s fleet of mobile television production trucks to handle tally routing to cameras, multi viewers and monitors. TNDV Television also added TSL’s ESP-1R expansion module to the system for contact closures, allowing for seamless integration with virtually any switcher or other mobile units via fiber and IP network.

For large music festivals, TNDV needs to be able to hand off camera feeds to DJs and touring video crews, and TSL’s TM1 MK2+ helps to effortlessly return tally data from guest switchers via IP. This same workflow applies to its sports projects in that it can provide various camera feeds to the in-house production, the sporting league and the broadcasters covering the event.

“The TM1 MK2+ was the most modern, compatible, expandable, compact and easiest to use of all the systems we were considering,” says Andrew Humphries, Director of Engineering, TNDV Television. “It has helped us simplify our workflow and amplify our professionalism beyond what we could have imagined.”