Having laid the necessary groundwork, the team will become a varsity program this fall

If you haven’t heard by now, esports is kind of a big deal. Gamers like Ninja have made the sport more visible than it used to be by introducing it to the mainstream, but esports’ positive momentum in popularity can be credited to the movers and shakers at the grassroots level. And, with gamers mostly in the younger demographics, colleges and universities around the globe are getting involved. One school in particular, Concordia University Texas in Austin, is making moves, establishing a NACE-certified team and filling out a 13-seat playing arena on campus.

“From January to July [of 2019], we were building our arena ,and on July 30, we officially opened it to our players and announced it to the public.” says Marc Valdoria, coordinator and coach, CTX Esports. “What was great about it was that we had multiple departments working on this project instead of just one. When we spoke to most universities, it seemed to be the case where [the esports program] did their own thing and then tried to involve others, but, at Concordia, it was grassroots work, where everyone wanted to be involved to make sure the program was successful.”

Fielding a Squad: Concordia Is First Collegiate Esports Team in Austin
This small Division III school in the heart of Texas is a fine example of how esports gains traction, but getting started on this initiative was a bit of a struggle. As for many liberal-arts institutions around the nation, gaining the attention, interest, and commitment from young adults to attend the university can sometimes be a hard bell to answer. 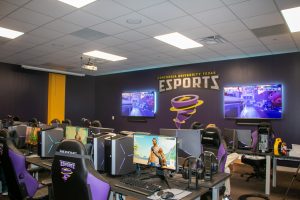 “All of the other sports that we thought of were going to be too expensive and cost us hundreds of thousands of dollars,” says Valdoria. “[Esports] was just thrown onto the table since we needed to add another program to entice more students to come here and drive enrollment. When esports was brought up, the administration asked us how much it was going to cost, and [the price] was definitely less than what we had [as our budget].”

Valdoria, a graduate of Concordia, didn’t really believe that fielding an esports team in the immediate future would happen.

“Everything moved extremely fast,” he says. ”It was quite surprising that esports at Concordia happened as fast as it did. This was something we [first] talked about last year around July.”

For the finishing touches, Valdoria and his superiors at the university traveled to local schools that were in the midst of developing their own esports program.

“Before officially announcing that we were going to have a program at Concordia,” he says, “we started scouting other universities: around November or December of last year, University of Texas at Dallas and other schools.”

Home Sweet Home: Inside of Concordia’s Esports Arena
Heading into the second season of the program in 2019, the team will be competing in the National Association of Collegiate Esports (NACE), one of the major independent esports conferences within the college ranks. Concordia can now compete against nearly 300 East Coast schools and more than 150 West Coast schools in Rocket League alone. Since the program will be competing in multiple competitions across five games (besides Rocket League, Overwatch, League of Legends, PLAYERUNKNOWN’S BATTLEGROUNDS, and Super Smash Bros. Ultimate), Valdoria has loaded up the squad with a good number of participants.

“We have five teams and a total of 40 students,” he says. “We recruited 10 incoming students since that was our goal; the rest are current students.”

To keep pace with the number of contests and sheer number of competitors, the new arena houses 13 gaming stations (12 for players and one for Valdoria as the coach) outfitted with gaming desktops, keyboards, and other necessary equipment.

“We worked with Dell to get the hardware in the arena,” says Valdoria. “That was through the partnership with the IT Department [and the team’s AV specialist]. Another vendor that we worked with called Nelco Media deals with NewTek technologies, [and] for production systems, we have the TriCaster TC1 in the arena.”

Despite having a room full of gear all its own, the team has been experiencing growing pains. In only his second year, the head coach deals with dilemmas similar to those in traditional sports. 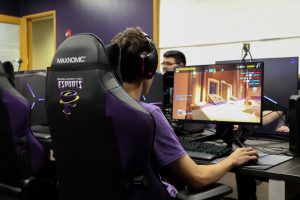 The second-year program is filled with a total of 40 students on five competing teams.

“It was quite difficult our first year,” says Valdoria. “I was able to schedule classes only for the incoming freshmen, so we had to play around the schedules of the current students since they were already set for the semester. During the first season, the practices, for the most part, were in the late afternoon or the evening ,and the latest we would go was about 9:00 or 10:00. It’s an issue that we’re trying to see if we can work with this season. If they’re Overwatch players, I’ll tell them that I want them to be out of class by 3:00 so we can start practice. Now they’ll know not to take any classes [at that time].”

With the roster and practice schedule figured out, the school is ramping up efforts to recruit students with the same fervor to produce the matches.

“Right now, [the TriCaster] is being underutilized since we don’t have the same student interest as we have for players,” says Valdoria. “We’re kind of building up that side of the program now.”

The Cornerstone of the Program: How Esports Can Thrive at Concordia
In just two short years, a lot of moving parts helped esports get to where it is at Concordia. Once a pipe dream, the sport now has a chance to grow on campus. And, for prospective students looking for a chance to continue their esports careers, Valdoria now has a space to show off in campus visits.

“It’s easier to recruit now than it was before,” he explains. “Last year, we didn’t have the equipment or the facility to show off. Whenever I had recruits on campus, all I could promise them was the idea of the facility with specific hardware. I would walk them through the space, but it was hard for them to envision it since there was nothing there. Now we have a working arena with PCs, [and] I can have them try out on campus. There’s something different about the face-to-face interaction, so we definitely want to capitalize on this opportunity.”