With ESPN’s launch of the ACC Network, the participant schools were required to step up their production game. In order to fulfill the needs of both live national broadcasts and its associated online platform, the University of North Carolina and its GoHeels Productions operation within the athletics department needed significant upgrades to their infrastructure. 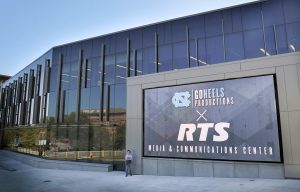 “This is a major undertaking, as we basically needed to provide the hardware and personnel that previously would have been done by a broadcast truck, plus we cover a lot more events now,” notes Kevin Tucker, Chief Broadcast Engineer, UNC Athletics. “It was the perfect opportunity to build a new facility from the ground up, implementing the latest technologies. Our RTS intercom system was a part of that.”

The new Athletics Media & Communications Center (MCC) is a two-story building housing three control rooms, a podcast radio room for live shows, and a remote-controlled Bureau Cam Room for live coach interviews on ESPN. The previous facility relied on hiring remote trucks for national broadcasts, but the new MCC is fully self-contained. Their four-channel analog partyline intercom system has been replaced by a full RTS ADAM matrix frame, which is outfitted with 48 analog channels and 128 channels of Dante OMNEO digital.

The MCC features a total of 53 keypanel stations for communication, three of which are DKP-3016 portable desktop models that video board operators at the sports venues use to communicate with the control room. Mobile phones are easily ported into the system via eight TIF-2000A interfaces, also by RTS. 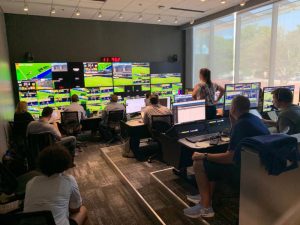 Another key component in seamlessly connecting the various sports venues is RTS ROAMEO, a wireless intercom system that essentially puts a full keypanel on the user’s hip, connecting into the ADAM system via wireless access points that are strategically located across the college campus. A total of 15 AP-1800 access points provide coverage for men’s football and basketball – as well as the stadiums for field hockey, baseball, softball, soccer/lacrosse, and women’s basketball – along with the Media Communications Center.

With ROAMEO networked into the ADAM matrix, crew members can move between stadiums without changing wireless channels, enabling them to dial into the intercom matrix as if they were in the control room. “ROAMEO has made things incredibly simple,” says Tucker. “When ESPN comes in needing to talk to people beyond our usual direct-to-web set-up, it’s no problem. We just grab a couple wireless beltpacks, program them in AZ Edit and it’s taken care of.”

Between the ACC Network and its online platform, UNC’s GoHeels Productions broadcasts about 75% of all athletic events on campus, including about 200 live telecasts across the school year. Depending on the event, the facilities draw from a diverse mix of full-time staff, freelancers and students from the university’s media and journalism programs, including all-student crews for some productions.

“We chose RTS because we wanted the best and latest technologies, and we had no doubts that it would make everyone’s life easier – from the ESPN folks doing national broadcasts to the UNC employees and students who want to work in live sports for their career,” says Tucker. “We had already decided to go with IP-based audio, and RTS is an industry standard known for their reliability that plays nice with everything else that’s out there. It was an easy decision for us, and we’re very happy with the results.”