WJHW and Diversified played major roles in the project

Much like the oil booms that made Texas an ideal business destination, the state is going through an era of immense sports-venue expansion. Esports Stadium Arlington has taken over the gaming sphere, Globe Life Field across the street is getting baseball fans excited for the 2020 season, but, 25 minutes to the west, Fort Worth is home to the newest of these buildings. Dickies Arena, a 560,000-sq.-ft. multipurpose facility with up to 14,000 seats, handles a wide range of activity from concerts to college basketball and other sports, such as the Fort Worth Stock Show and Rodeo. 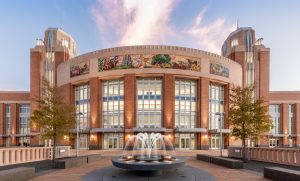 The new Dickies Arena will host a myriad of events, such as rodeo, basketball, concerts, and gymnastics.

CLICK HERE for an audio breakdown of Dickies Arena.

“In our first month, we booked events with Twenty One Pilots, SuperM, The Black Keys, MercyMe, and Hot Wheels Monster Trucks Live,” says Andrew Schmidt, technical services manager, Dickies Arena. “We will have George Strait in here for two nights back-to-back, and we also have basketball. So we’ve tried to focus heavily on versatility, flexibility, and showing a whole range of different opportunities for people of Fort Worth to come and enjoy the facility.”

At the onset of this project, Schmidt and his team at Trail Drive Management Corp., the managing company of Dickies Arena, knew that putting this building together would require a chess-like mentality to anticipate the next move and accommodate any and all clients seeking to host an event there. The venue may be hosting a non-conference basketball game between local TCU and USC on Dec. 6, but the Fort Worth Stock Show and Rodeo is its main tenant and was consulted first. It has been operating on an annual basis in the adjacent Will Rogers Memorial Center, which was built in 1936.

“About a year and a half ago, I came in to assist with the technology build-out and reviewed the specifications that WJHW laid out for the audio- and video-control spaces,” Schmidt says. “We also worked with Beck, who was the general contractor on the job, to make modifications because [specifications were made] in 2004 for the first time, mothballed during the recession in 2006, and then brought back to life in 2014. In the old Will Rogers, they did a temporary videoboard, and they’ve kind of been manipulating it over the years. That was a big reason I came in early, to work with them and say, ‘What are you doing right now? What do you want to do?’ We laid out some of the mock-ups of the stats and the video windows early, kind of talk to them about what they want to see and what stats information they want to show on the board, and then design the board around those needs.” 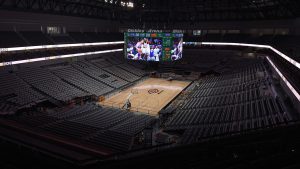 The venue is accentuated by a 189- by 25.2-ft. Mitsubishi Black LED circular centerhung videoboard.

As the structure began to take shape, Dickies Arena wanted an in-venue experience that would catch the gaze of any attendee who walked through the front door. For the rodeo’s 13th year using a videoboard, Schmidt contracted ANC Sports (which created the first-ever 4K kinetic scoreboard in the Wells Fargo Center) to install a 189- by 25.2-ft. Mitsubishi Black LED circular centerhung videoboard with 6-mm LED spacing and a 57-ft. diameter of seamless and uninterrupted video. On the centerhung’s belly, 35- by 10-ft. displays with 4-mm spacing entertain those seated on the east and west sides.

“We started on the install in March, and it turned out beautiful,” says Schmidt. “One of the big things we waited for was Analog Way’s new Aquilon processor to drive it, so we were able to have all of the capability and scaling for the inputs off of SDI. Getting the programming right was the most lingering thing we dealt with as we got the videoboard installed.”

In addition, the venue features a 1,074- by 2.5-ft. ribbon display with 16-mm spacing that wraps 360 degrees above club- and below top-level seating. Out in the concourse, four 1.8-mm curved DigiLED displays headline the complement of 520 displays and video walls. To round out the list of LED fixtures, each suite comes with LG OLED wallpaper displays with Crestron panels for TV, audio, lighting, and HVAC control.

In the Crow’s Nest: Dickies Arena Deploys Streamlined Equipment Layout for Efficiency
With a calendar’s worth of events, establishing an efficient control room was high up on the list of priorities. As the seating chart adapts to a day’s event (a capacity of 14,000 for concerts, 13,300 for basketball, 12,000 for family shows and hockey, and 9,300 for the rodeo), the production strategy shifts as well. To handle the diversified schedule, Dickies recruited technology integrator Diversified to assemble a powerful control room. 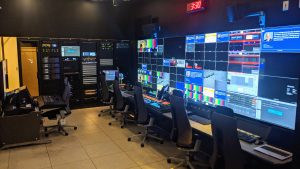 Ross Video anchors the equipment inside a control room put together by Diversified.

“We had a great vision [of the project[ given to us by Andy. He was able to put together his wants and needs for the project and communicate that to us effectively,” says Lane Baird, project manager, Diversified. “We went off and designed the system based on his 1080p/59.94 requirements.”

As with the physical structure, Schmidt and company worked hand-in-hand with their main client to set up the quintessential camera complement for a night at the rodeo.

“[Stock Show President/GM] Brad Barnes’ comment over and over again was, he wanted cameras capable of seeing the snot in the bull’s nose and nothing more,” says Schmidt. “You’re trying to find those right camera angles, lenses, and equipment to make sure that we can meet all the different shows they like to do with the crowd and the interaction with the fans but also cover [the action of] the rodeo, which has a huge floor. Our playing surface is 250 by 150 ft. wide, so our cameras get backed off even more substantially than they would in most arena sports.”

Diversified hooked up the venue’s control room with anything these crews will need. The 13-camera arsenal includes four Sony HDC-3100’s, one Sony PXW-X400 camera with RF capabilities provided by Wave Central, and eight Sony BRC-H800 PTZ cameras. Replays are done via Evertz Dream DC-One server with six feeds coming in and two going out. Ross is omnipresent in the form of an Acuity 2X production switcher, five channels of XPression graphics and Inception social-media management embedded within it, a four-channel Tria Clips playback video server, and an Ultrix 96×96 router. The production team keeps pace with a Riedel Communications 64-channel Artist intercom network, eight Riedel Bolero beltpacks, four channels of Clear-Com communications, and a 16- by 5-ft. LG bezel-less video wall as the main control-room display.

To connect all these technologies, Dickies Arena is leveraging future applications to stay ahead of the game. 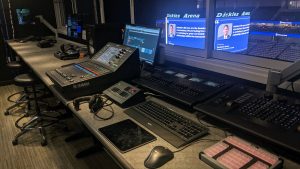 “Since we are a unique management company, we do own our own data and Wi-Fi system. It’s designed to handle every single guest in here with 1.3 devices per person,” says Schmidt. “AT&T and Verizon signed up already, and T-Mobile is going to be coming on board. We built it out with 5G antennas into the catwalk, and the new AX wireless system from Cisco is going to make sure that we’ll accommodate the next-gen Wi-Fi devices. As beautiful a facility as it is, it was a challenge to hide those antennas and maintain that aesthetic and also make sure that we are absolutely 100% technologically advanced as any venue in the country.”

In the control room, ANC has supplied a full-time employee to provide onsite support for a full year on a crew of 18-20 staffers. As for other control-room questions, the two parties have maintained an open line of back and forth dialogue for the arena’s upcoming tentpole events.

“We’ve been primary points of contact for both Andy and his engineer team so that they can reach out to us. [For example], I was there earlier this month to just check in and make sure that everybody’s happy, but we will be doing some onsite support for both the basketball game on Dec. 6 and the first day of rodeo,” says Baird. “There’s a great relationship between Diversified and Trail Drive Management Corp., and I think we’ve had a great communication between myself and Andy.”

Giving Back: Dickies Arena Strives to Continue Legacy of Will Rogers Center
Whether fans are wearing cowboy hats, boots, and leather chaps; a basketball jersey of their alma mater; or a T-shirt of their favorite band, the main mission of Dickies Arena is to give back to the community. It’s one of the sole drivers of the city’s economy, and Schmidt wants to do his part to make the place a beacon for the community and combine it with Will Rogers in a two-venue experience.

“As a nonprofit [organization] ,” he says, “we also have to keep our budgets in line and our staffing numbers in line, so that we can actually donate that money back to the city of Fort Worth, the parks, and the other nonprofits around here like we want to. Part of the driving factor here, [the facility was funded] largely by a couple of very wealthy people here in Fort Worth to make sure that the proceeds from this continue to go back into the Will Rogers campus and make sure that that legacy continues.”

On a grander scale, the arena is already receiving invitations to host nationally recognized events, including the 2020 NCAA Women’s Gymnastics Championship (April 17-18); the American Athletic Conference men’s basketball tournament in 2020, 2021, and 2022; and the first and second rounds of the 2022 NCAA Division I Men’s Basketball Tournament. Although other major cities in Texas garner the media’s attention, the city of Fort Worth is aiming for some much-needed airtime.

“Fort Worth is the 13th-largest city in America so It’s not exactly a small town, but it gets passed over a lot for Dallas,” says Schmidt. “It is one of the most beautiful venues I’ve ever been involved with, so we’re making sure that this part of town and Fort Worth, in general, get these first-class events.”