Fox Sports is pulling out all the stops for Saturday’s Big Ten showdown featuring No. 9 Penn State at No. 2 Ohio State, deploying its largest college-football production in recent memory. The network’s all-out production blitz kicks off with a special two-hour edition of Big Noon Kickoff with dual studio locations inside and outside Ohio Stadium. 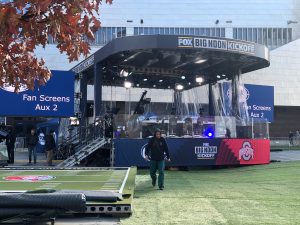 A special two-hour edition of Big Noon Kickoff will have talent inside and outside Ohio Stadium.

“Our new college-football pregame show is jam-packed for this game, beginning with our state-of-the-art set, specially designed by Fox and Filmwerks for this college-football package,” says Rod Conti, VP, technical studio remote operations, Fox Sports. “Our plans are to bring the same excitement that we brought to the Red River Showdown last month in Dallas. This show is even bigger, with Fox Sports utilizing two locations, outside the stadium and inside. Using our new rover desk to assist on the sideline, we plan to bring all the energy from this event — on the field and off it — to home audiences.”

Host Rob Stone and analysts Brady Quinn, Reggie Bush, Matt Leinart, and former Ohio State coach Urban Meyer will be live on Fox beginning at 10:00 a.m. ET from outside the southeast entrance to Ohio Stadium. Fox Sports’ outdoor set, the same one deployed at the Red River Showdown, features a demo field (used for Big Noon Kickoff’s “Urban’s Playbook” segments), as well as two large LED screens. The screens show live pregame, halftime, and postgame coverage, as well as the entirety of the game for fans outside the stadium.

For the 11:00 hour, the cast of Big Noon Kickoff will move inside the Horseshoe, behind the end zone near the southwest tunnel for more analysis until the game kicks off at noon. 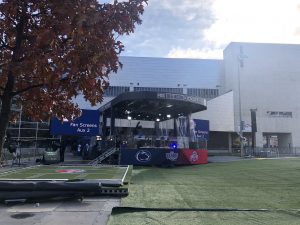 The shows will have 12 cameras including three build-ups, a wireless handheld, a wireless Steadicam, and a jib.

“There are some challenges to having dual sets, of course,” notes Conti. “One will be having to change locations between the 10:00 and 11:00 hours. We are live outside from 10:00 a.m. to 11:00 a.m. and then go live from inside the stadium from approximately 11:00 until kickoff at noon. We will also have two large LED screens attached to our set, which will be broadcasting the game live. All fans not inside the stadium are encouraged to come, watch, and enjoy.”

The pregame shows will be use 12 cameras between the two sets, including three build-ups, a wireless handheld, a wireless Steadicam, and a jib at each stage. The outside set also features an 80-ft. Strada crane and is equipped with a third jib. Fox is using Game Creek Video’s Justice mobile unit for the pregame show.

Fox College Football lead broadcasters Gus Johnson, Joel Klatt, and Jenny Taft have the call once the game kicks off.