Dignitas and FaZe Clan are the latest to exhibit this trend

Although watching competitors play is generating the most viewership for esports productions, creating surrounding content is drawing new viewers to the main platform (and sometimes keeping the diehard fans around). Some production companies looking to control the minute details of when and how their message gets out are developing their very own facilities to tell stories about the players beneath the headsets.

At the SVG Esports Production Summit, two such outlets discussed how they’re tailoring both live-streamed and VOD material to be digested by the esports masses.

Dignitas VP of Marketing Heather Garozzo defines the ethos of some of the team’s produced content:

This past summer, we decided that we really needed to put some content around these guys because they’re hilarious, have great personalities, and are hard workers. A lot of the content so far has been mini docuseries on their different events, and [viewers] get a behind-the-scenes look at what it feels like to be a team that’s the underdog who’s taking on the best in the world and are winning some of those matches. 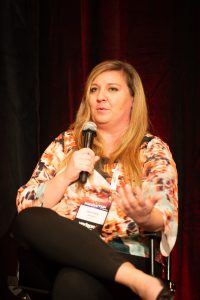 Dignitas’s Heather Garozzo outlines how the company’s new facility in the Prudential Center offers access to creating content with celebrities and professional athletes.

Since we’re is based in [Newark, NJ’s] Prudential Center, which is one of the busiest arenas in the world, we have this opportunity to bring celebrities and athletes into our headquarters that are gamers. We want to make it feel authentic. We’re not going to pay people to come and create content; we just want to invite people in to relax and play some games

FaZe Clan VP, Content and Production, Oluwafemi Okusanya describes the beginnings of the company and where it is today:

FaZe Clan started with a group of gamers that wanted to link up and start a [gaming] clan. They started gaming, and, a few years into it, they all said, ‘Hey, we don’t want to just show our gameplay. We’re also individuals that want to show off our personalities and show the world who we are.’ Then, FaZe Clan really started to blow up on YouTube before it became popular because they would create videos of trick shots on Call of Duty.

They started to amass this huge following, and, after a while, each one of those guys started to get followers of their own on Instagram. Our President Lee [Trink] and CEO Greg [Selkoe] came in and wanted to put the structure behind everything, so we’re broken up into three categories: professional athletes who compete in the highest levels of esports, content creators who are purely streaming, and our [social] influencers. It has grown because of our fan loyalty and content that is organic.

Garozzo and Okusanya outline the construction of their respective new production hubs:
Garozzo: Within the Prudential Center, we have a 3,000-sq.-ft. facility. 500 sq. ft. of that is dedicated to a content studio with 4K cameras and several IRL backpacks, so, if we don’t want to sit inside to create that content, we can take those things and walk into a Devils game and live-stream from the concourse or what we did at the Grammys [at the Prudential Center], or [we can] give [the backpacks] to our social influencers to take out on the road. We have our teams come in now and then; we do a week’s work of content that we can publish for about a month or two. We also have content creators that live in a house in Jersey City, NJ, that are gamers at heart but are also musicians. They produce music and also create content with those that come into the space as well.

We’re also building a 7,000-sq.-ft. space in Los Angeles. It’s going to be a little different: it’s not a dedicated studio but more of an event space. It’ll be kind of a 5v5 setup with cameras mounted on the ceiling, and we’ll invite fans and other teams to live-stream from there. 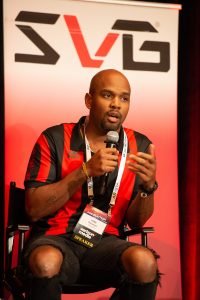 Okusanya: We’re preparing to open a new Los Angeles office in January 2020. It’ll be 14,000 sq. ft. on the sixth floor of a building, and, inside of that, we’ll have our production studio and do photoshoots with celebrities when they come in. We’ll also do live streams and produce content within our infamous FaZe House, a Hollywood mansion not far from the new office.

The FaZe Council didn’t want the office being more than 5 miles away from the House. We want those guys to feel free to come down to the office and have a chat with the production team and have the freedom to take celebrities that are visiting the FaZe House and show them what we have going on over there. The cool thing about having these houses is that the guys really sit down and strategize about what they’re going to do on their own personal channels. We wanted to keep that tradition alive in L.A.

Okusanya and Garozzo on getting the job done with limited staffing:
Okusanya: “We do everything in-house, and we make it work. You may think that we have a huge, 20-person team, but the FaZe Clan content team has only four full-time workers, three remote editors, and contracted videographers and DPs. I was given the green light to staff up because we’re getting a lot of brands coming in that want a certain commercial or documentary, so we’re in the process of building up our team.”

Garozzo: “We also have a staff of four right now: director, producer, videographer, and a creative strategist. It’s a small team for all the content we produce, but, once we open up our Los Angeles facility, we’ll certainly have to beef up our staff.”

For an entire look at the discussion, watch the following video: