Kansas State University Athletics has done its part in providing equal opportunities for female students in K-StateHD.TV, the university’s video-production department. Thanks to cooperation with ESPN, a sense of initiative by higher-ups, and pure happenstance, the program penciled in the first all-female broadcast team of a Power Five conference in a women’s basketball matchup with UT Arlington on Nov. 24. 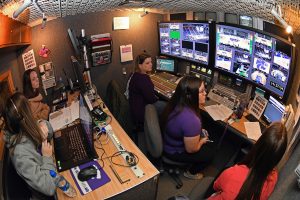 13 K-StateHD.TV students work inside the control room during the first all-female broadcast production in college athletics.

“A couple of years ago, I had an idea of wanting to do something like this,” says Andy Liebsch, director, video services, K-State Athletics. “We were getting a lot of female applicants to our crew, but, on the day-to-day, I wasn’t seeing [many] of them venturing into certain positions, such as replay or handheld-camera operator. I’ve tried to get [female students] more involved because they are certainly underserved in certain areas in the broadcast industry.”

All for One: Program Receives Administrative Support, Buy-In From Crew
With a program that has a handful of female members, Liebsch set out to put this concept into motion. When university administrators considered the plan’s potential, it officially garnered complete institutional backing and grabbed the attention of local news outlets.

“[Supervisors] thought it was a cool idea and a good way to get more people involved in doing something that was unique,” Liebsch says. “The benefit was getting some publicity to our program and some of the stuff that we have going on here, but I hope, moving forward, there are some people [who] say, “That’s something I want to do.’ Maybe this event becomes an inspiration, and some of them want to come to Kansas State or come work for us.” 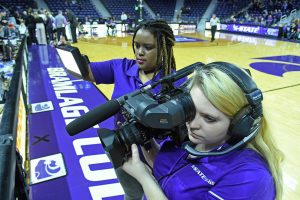 Two students light and record an on-court shot behind the scorer’s table.

Students currently on the staff felt that it was a must-do when Liebsch brought the notion up to them.

“We mentioned it last year, but, while I was at my internship over the summer, I just kept thinking about it,” says senior Bri Womack, director, K-StateHD.TV. “I said to myself, ‘This is something we’re going to do, and it’s definitely going to happen this year.’ When we had our orientation [for first-year students] that first weekend back at school, he pulled me to the side, and the first thing he said was, ‘What do you think about doing this broadcast this year?’ Once that happened, we were all on board and were all really excited for it.”

Inside the Control Room: Team Relishes the Significance of the Memorable Broadcast
On game day, a majority of the crew understood the magnitude of the situation. With a historic event before them, Womack took the time to settle some nerves and rally the troops before hitting the air. 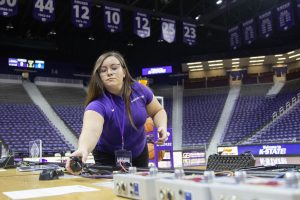 Director Bri Womack helped set up the historic night and led the effort from the front bench.

“I met with all the girls before the game started and gave them a little pep talk,” she says. “Right before the game started, I said over the headset, ‘Hey, guys, this is a big deal, but I trust all of you, and we all trust each other. I want you to know how important this is not for only us but for everyone out there who’s trying to get into sports, especially women.’ I was definitely nervous but not as nervous as I was expecting to be, because I had a good crew with me.”

When the broadcast went to black at the conclusion of the game, the feeling of making history washed over the behind-the-scenes team.

“There were a lot of high fives and a lot of yelling,” says Womack. “It was hard, and it wasn’t a perfect broadcast by any means, but we made it through. Once it was over, we were like, ‘Yes, we just did that.’”

Room for Everyone: The Continuous Fight for Female Television Professionals
K-StateHD.TV has quietly become a program nurturing the next generation of both male and female professionals. Graduates have worked for such media outlets as multiple ESPN and Time Warner affiliates, other college programs (Iowa State University), and professional organizations (Kansas City Royals). Last year, when Womack was a junior, the gender gap at the program was wider than it is now. 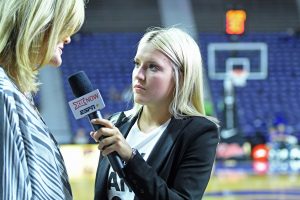 “Personally, when I first started here in last August, it was terrifying,” she says. “My first day was a football game, and it was a crew of probably 50 people, and they were all guys. I wasn’t sure if I liked [the program], but, after that, I said, ‘You know what? This is something that I could probably make a change in.’

“Without any of my effort,” she continues, “a lot more girls just joined and started working here, but I think that situation happens to a lot of people everywhere. Girls maybe want to get into sports, but it’s an intimidating field.”

With hardworking students like Womack and an administration, led by Smoller and Liebsch, willing to offer a chance to work in an accepting environment, the future of sports-video production at Kansas State and around the industry is most certainly female.

“It was really cool seeing how this all just came together,” says Liebsch. “But I hope more individuals keep applying to work here. As more people want to join, see that they can do it, and continue to get better at what they’re doing, we hope we can make an impact.”