Multi-transducer mics grow in importance with evolution of 5.1 surround

Once near novelties, dedicated surround microphones have become more common in the sports-broadcasting toolkit, as 5.1 becomes the native audio format for television networks. This category of multi-transducer mic has been used particularly for soccer, with its expansive pitch to cover. As the immersive-audio era edges closer, surround microphones will be increasingly important to sports broadcasts.

Here are some of the leading ones.

DPA Microphones
The 5100 mobile surround microphone is a completely self-contained plug-and-play solution for 5.1 audio capture, bringing surround ambience to sports events, documentaries, and other HDTV productions. This versatile microphone can be deployed in many ways: mounted on a microphone stand, suspended from the ceiling, or via a handgrip. Though lightweight and portable, its robust nature enables it to withstand inclement weather conditions. The 5100 uses five miniature pressure transducers, each of which offers low sensitivity to wind and mechanical noise, low distortion, and low frequency response; they also have a large dynamic range. The three front microphones in this system are time-aligned to eliminate comb filtering, ensuring frequency consistency in downmixing to stereo or mono. In contrast, the rear microphones, with standard omnidirectional patterns, are optimally spaced from both each other and the front array to simulate the most natural time-arrival differences. The end result of DPA’s innovative design approach is a surround atmosphere that is rich, smooth, fully enveloping, and great in its coherence, channel separation, and localization accuracy. The 5100 mic requires no external signal processing. 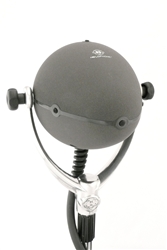 The H2-PRO microphone is designed specifically for capturing discrete 5.1, 6.1, and 7.1 channels of surround sound for all professional-audio applications. It is well-suited for television (standard TV, DTV, and HDTV) and radio broadcasters. All surround-sound recordings from the H2-PRO are discrete and in real time, thereby very easy to bring into any broadcast or studio environment, manipulate, mix, and/or encode into any/all of the standard consumer playback formats: Dolby, DTS, and Circle Surround. The H-2 PRO provides engineers and producers total control over all incoming discrete surround-sound audio signals and delivers those signals in an intuitive way. It is compatible with all standard analog and digital I/O devices that accept up to eight channels and provide phantom power: hard-disc–based recorders, multichannel preamplifiers, standard multichannel I/O, and all mixing consoles. The H2-PRO is capable of recording up to 7.1 channels of discrete surround sound and terminates in eight XLR microphone cable-ends (Left, Right, Center, Low Frequency, Left Surround, Right Surround, Top, and Center Rear). These co-relate to the standard 5.1 channels and add a top channel for such formats as IMAX and a center-rear channel for extended surround formats, such as Dolby EX and DTS ES. 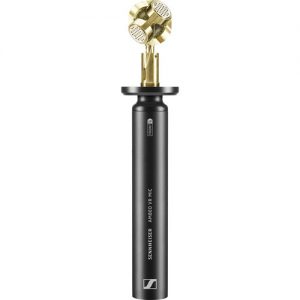 Sennheiser
Designed for 360° spatial audio recording, AMBEO VR mic is an ambisonic microphone fitted with four matched KE 14 capsules in a tetrahedral arrangement. This special design allows capture of surrounding sound from one single point. As a result, fully spherical ambisonics sound matches VR video/spherical 360 content. The capsules of the AMBEO VR mic deliver A-format, a raw 4-channel output that has to be converted into a new set of four channels, the Ambisonics B-format. This is done by the specifically designed AMBEO A-B converter plugin, which is available as free download for VST, AU, and AAX format for the preferred digital audio workstation, both PC and Mac. B-format is a W, X, Y, Z representation of the sound field around the microphone (W being the sum of all four capsules; X, Y, and Z virtual bidirectional microphone patterns representing front/back, left/right, and up/down). Thus, any direction from the microphone can be auditioned by the listener during playback of Ambisonics B. 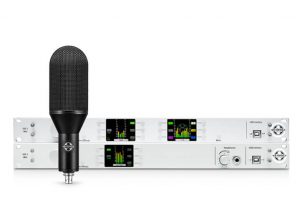