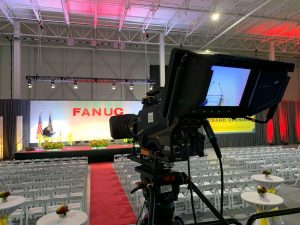 The celebration of FANUC’s new North American Distribution Center was attended by an audience that included 600 executives of Fortune 100 companies, national, state, and local political leaders, media, and employees.

Sam Hannah, Creative Day’s Chief Technology Officer, said that the company used three (of its four) AK-UC4000 camera systems at the live FANUC event. “We purchased these Panasonic cameras for their ability to deliver a superior image with the wide-ranging environments we work in and the ability to acquire in 4K. With this project, we had a large audience with many delay screens. We needed the IMAG images to look great since the stage was at a fair distance from the live audience,” he recounted.

For the FANUC event, the AK-UC4000s were outfitted with Canon 20x and 40x zoom lenses, and 80x image stabilization sports lenses. The project was delivered in 1920 x1080p.

“Based on our competitive research, the UC4000 was the best available camera in terms of image quality, weight, and proportions, and the overall functionality our engineers are accustomed,” Hannah said. “Those factors coupled with Panasonic’s unmatched cost-efficiencies, both immediate and for future upgrades like HDR, influenced our purchase.”

“While 1080p is our customary production format now, the UC4000 gives us entry into an HDR/4K world, with a diverse choice of formats, aspect ratios, and transmission speeds,” he noted. “Also, with the UC4000 we can shoot 1080p with no more need for conversion and a cleaner signal throughput.”

Since taking delivery of the cameras this spring, notable clients that Creative Day has supported with the AK-UC4000s have also included Comcast, Amway, Meijer supercenter stores, the Michigan State Lottery, the 2019 Detroit Jazz Festival, and other arena events.