50+ cameras to be deployed for CFP Semifinals games; Sugar Bowl to be Produced in 4K

ESPN will offer 10 presentations of both College Football Playoff Semifinals – through its annual CFP MegaCast production on Saturday, Dec. 28 – as the Chick-fil-A Peach Bowl features No. 1 LSU vs. No. 4 Oklahoma (4 p.m. ET) and the PlayStation Fiesta Bowl matches No. 2 Ohio State vs. No. 3 Clemson (8 p.m.). The CFP Semifinals presentation will also highlight multi-network productions for the entire New Year’s Six. Across all New Year’s Six games, including at least five offerings for Rose Bowl Game and Sugar Bowl, ESPN will provide fans with nearly 40 different presentations for the premier bowls. 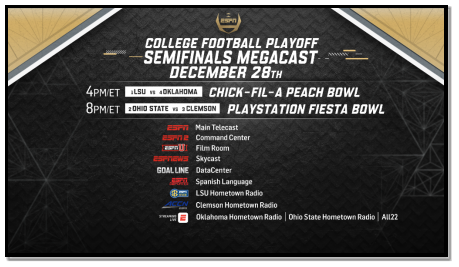 The New Year’s Six concludes with the Rose Bowl Game Presented by Northwestern Mutual (No. 6 Oregon vs. No. 8 Wisconsin at 5 p.m.) and the Allstate Sugar Bowl (No. 5 Georgia vs. No. 7 Baylor at 8:30 p.m.) on New Year’s Day. Surrounding the CFP Semifinals are the Goodyear Cotton Bowl Classic (No. 10 Penn State vs. No. 16 Memphis at noon) on Semifinal Saturday and the Capital One Orange Bowl on December 30 (No. 9 Florida vs. No. 24 Virginia at 8 p.m.). ESPN’s entire offering of the New Year’s Six is a prelude to its presentation of the College Football Playoff National Championship Presented by AT&T on Monday, Jan. 13, at 8 p.m. ESPN’s exclusive presentation of the College Football Playoff and the New Year’s Six will also include on-site studio presence across the country.

ESPN’s Innovative Technology is the Backbone of MegaCast Production
The CFP Semifinals MegaCast begins with ESPN airing the traditional telecast, which features the network’s innovative technology combined with unique vantage points, providing fans with a state-of-the-art presentation. More than 50 cameras will be deployed inside Mercedes-Benz Stadium in Atlanta and State Farm Stadium in Glendale, Ariz. Featured in at least one semifinal will be

Dovetailing off the main telecast will be the alternate presentations, combining those distinctive vantage points with alternate commentary, up-to-the-minute stats, analytics and more:

For the first time ever, the Sugar Bowl will be available in 4K as part of ESPN’s multi-network presentation. The Allstate Sugar Bowl brought to you in 4K by Samsung QLED will feature native 4K resolution and is available to fans who receive 4K service through Altice, Comcast or DIRECTV. This is part of a broader agreement between ESPN and Samsung — who serves as production collaborator and presenting sponsor — where the companies presented six college football games in live, native 4K during the regular season.

Multiple Commentator Options Complete CFP Semifinal MegaCast Presentations
In addition to multiple presentations, fans will be able to hear the call of the CFP Semifinals from a variety of broadcast teams:

Additional New Year’s Six Game Broadcasters
Fowler, Herbstreit, Taylor and Rinaldi will head to Pasadena following the CFP Semifinal to call the Rose Bowl Game. For Herbstreit, the Ducks-Badgers matchup will be his 13th Rose Bowl, adding to his current record for the most of any game analyst. As a duo, this is Fowler and Herbstreit’s fifth Rose Bowl game together. On the sidelines, Rinaldi (Wisconsin) is working his sixth Rose Bowl, tying him with Todd Harris for the most Rose Bowls as a reporter, while Taylor (Oregon) is reporting on her third Rose Bowl. For ESPN Radio, Bob Wischusen, Dan Orlovsky and Allison Williams will call the game. ESPN Deportes will also televise the action from Pasadena.

McDonough, Blackledge and Rowe travel to New Orleans for the Allstate Sugar Bowl, as the trio calls the game for their second consecutive year as a team. For Blackledge, the game marks his eighth Sugar Bowl and for Rowe, her seventh. Prior to calling the game on TV, McDonough served as the play-by-play for ESPN Radio. This year, Sean Kelley, Barrett Jones and Ian Fitzsimmons call the game on ESPN Radio. ESPN Deportes will also televise the action from New Orleans.