Ross Video’s Ultrix IP – the IP blade that complements the Ultrix Routing & AV Processing platform – has received a TV Technology 2019 Product Innovation Award. This award is the ninth received by the Ultrix platform since its original launch in 2015 and recognizes “excellence in manufacturing of products to serve the TV/pro video and radio/online audio industries”. 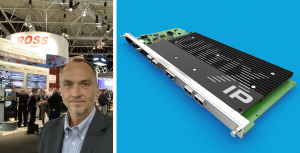 In addition, Ross Video’s Mark Sizemore (VP of Connectivity) has been honored by the PIA Awards as ‘Innovator of the Year’. His early career was spent with Leitch Incorporated and during this time – the early days of the transition to digital – he progressed through the engineering ranks to become lead Digital Engineer with a focus on Hardware, FPGA and low-level software designs. Later, Sizemore worked as a Product Manager of the large routing, MultiViewer, and control system product lines. His journey ultimately brought him to Ross Video, where he has the privilege of leading a strong talent pool that has created such ground-breaking platforms as Ultrix.

The latest advancement to the platform, Ultrix IP, allows customers to route and process signals via both IP & SDI transport streams agnostically using industry standards into one of the most powerful, integrated software-defined hardware platforms. When combined with the Ultricore IP software license of the Ultricore BCS, users can build and operate their systems just like they do with today’s control surfaces lowering the barrier to transition to this technology. Ultrix allows users to optimize their system architectures with a fully integrated solution, minimize disruption to current workflows by presenting I/O independent of type into a seamless matrix space, and assist in the transition to IP by providing an upgradeable platform and complete integrated features set – routing, MultiViwers, processing, and audio management.

Commenting on the awards, Sizemore is very quick to recognize the contribution of his team-members at Ross.

“When we set out to build the Ultrix platform, we wanted to create a high-spec solution that would disrupt the market, be innovative, and change the perception of what a routing platform can provide. I’m immensely proud to have been awarded this ‘Innovator of the Year’ accolade and to have the latest generation Ultrix IP recognized with a Product Innovation Award; its success is testament to the hard work of a smart and highly dedicated group of people who have completely redefined this product category. 2019 was an amazing year for our team and I can confidently promise that 2020 is going to be even more exciting”.