ESPN closed out the NFL season with a win on Saturday. The Houston Texans’ heart-pounding 22-19 overtime victory over the Buffalo Bills was the most-viewed NFL Wild Card Game ever on ESPN and ABC (averaging 26,409,000 viewers across ABC, ESPN, and ESPN Deportes). ESPN’s colossal production at Houston’s NRG Stadium served as a fitting crescendo for ESPN’s operations team, which once again turned in a season of Monday Night Football shows packed with cutting-edge technology and overwhelming scale.

“It has been a great season, and it has gone very smoothly,” says Steve Carter, senior operations manager, ESPN. “I’m very proud [of our operations team]. Every week, this team works very hard to put the best possible product on the air.” 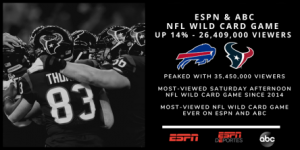 Texans-Bills matchup was the most-viewed NFL Wild Card Game ever on ESPN and ABC.

“[The production was] larger than a regular MNF game,” says Carter. “We treat all games as being on a large stage, but the Wild Card is definitely a very important game. Additional transmission redundancies are put in place between the remote, ESPN, and the ABC network.”

ESPN also rolled out a pair of studio sets for pregame coverage at NRG Stadium — a main stage and a side set located on the sideline at each 20-yard line — for a special edition of Postseason NFL Countdown.

Producer Jay Rothman, director Jimmy Platt, and the rest of the production team were housed in the familiar confines of NEP’s EN1 mobile unit — home to MNF — for the Wild Card production.

A Look Back: Technical Leaps and a Trip South of the Border

The 50th season of Monday Night Football featured plenty of cutting-edge innovation, including a distinctive new graphics package that has created plenty of discussion around the industry and on social media.

In addition, the Marker Cam system was revamped for this season and used a C360 camera, which has allowed the operator to pan, scan, zoom, and extract video from within the camera’s wide field of view. The Marker Cam was complemented by a pair of line-to-gain cameras version 2.0, which feature cameras from 3G Wireless.

“[The Marker Cam and line-to-gain cam have] integrated into the show very easily,” says Carter. “Working with C360 and 3G has been very good.

Carter also cites Monday Night Football’s NFL International Series game in Mexico City (a Kansas City Chiefs’ 24-17 victory over the Los Angeles Chargers) on Nov. 18 as a major highlight of the past season.

“Mexico City was a major accomplishment,” he says. “We moved 10 tractor-trailers into and out of Mexico. We were required to inventory every piece of equipment as well as indicate where on each truck it was located.”