With RF bodypacks getting smaller, tougher, and smarter, audio transmitters offer a wide variety of features. Here’s a selection of some of the leading current models.

The RE3-BPT compact, lightweight UHF bodypack transmitter accepts a wide variety of input devices. The all-metal body is robust and durable and operates on two AA alkaline or rechargeable NiMH cells. An ultrasonic sync function enables simple system setup by syncing the transmitter to the receiver frequency tuning and other functional data. The selectable output power (band-specific) assists in overcoming the challenges of both long and short transmission ranges. The tuning bandwidth affords generous frequency-tuning options, helping to avoid various sources of possible interference. The device’s magnetic sliding latch and lock mechanism keeps the battery door closed securely and allows effortless access to batteries. Recharging contacts provide functional use with the optional BC2 charging station allowing the NiMH rechargeable cells within two bodypack transmitters to be charged without removal. www.electrovoice.com/ 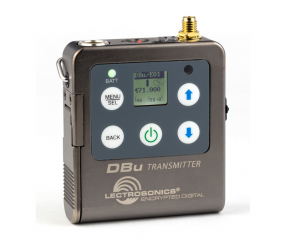 The SMWB (single AA battery) and SMDWB (dual AA) transmitters tune across 76.8 MHz or three standard Lectrosonics frequency blocks and come in several frequency ranges. RF power for these models are selectable at 100, 50, or 25 mW. The SMWB and SMDWB feature the standard TA5 connector with servo-bias mic input found on all previous SM Series units and all current TA5 beltpack units. The SMWB and SMDWB units can be configured as either a transmitter or a recorder, with files stored on Micro SD card memory in the industry-standard Broadcast Wave (.wav) format at 24 bits. The Micro SD memory card can also be used to update firmware in the field. These transmitters feature IR sync for quick setup and can be configured via RM remote commands, compatible with the Lectro RM and PDR Remote smartphone apps, for hands-free setting changes.

The WM is a water-resistant transmitter with a membrane keypad and a specially designed water-resistant machined-aluminium housing. The WM offers 256 synthesized UHF frequencies in 100-kHz steps in nine blocks, each covering a 25.6-MHz bandwidth. Features include selectable RF power at 50, 100 and 250 mW; dual bi-color modulation LEDs for accurate gain adjustment; and a backlit LCD for ease of use. Two AA batteries power the WM, with internal-switching power supplies providing constant voltages to the transmitter circuits from the beginning (1.5 V) to the end (0.85 V) of battery life. The WM responds to RM remote commands, compatible with the Lectro RM smartphone app, for hands-free setting changes. www.lectrosonics.com/

Quantum5X Systems
New this year, the QT-5100 CoachMic transmitter features a large, easy-to-use rocker-style mute switch physically integrated into the transmitter’s form factor. It is designed to be worn either vertically in the inner breast pocket of a suit jacket or horizontally on the belt and has an LED indicator light visible in either orientation to display whether the unit is muted or transmitting audio. Also new this year is a Sennheiser-compatibility companding mode, which allows use of existing Sennheiser receiver inventory.

The QT-5100 family of wideband remotely controlled transmitters are designed for sports applications and are frequency-agile from 470 to 700 MHz with 3,000 selectable channels across 75-MHz blocks in 25-kHz steps. Currently, besides the original QT-5100, there are six models of the transmitter: QT-5100 Incognito, QT-5100 AquaMic (waterproof), QT-5100 RefMic, QT-5100 CoachMic, QT-5100 PlayerMic, and QT-5100 PlayerMic S. This last, the smallest remote-controlled PlayerMic to date, features a soft, tough, sweat-proof, flexible polymer enclosure with dimensions of 3 x 1.5 x 0.4 in. and a run time of 3.5 hours at a 50-mW RF transmit power setting. Both the RefMic and the CoachMic feature a large robust integrated non-popping audio mute switch. All features of QT-5100 transmitters are set and adjusted through the QG-H1 MicCommander remote-control unit, which facilitates total control without physically touching the transmitter.

The manually controlled QT-300 series, an updated version of the legacy QT-256, is available in three models: QT-300 BeltPack, QT-300 PlayerMic, and QT-300 Incognito. QT-300 is tunable to 3,000 frequencies in 25-KHz steps between 525 and 598 MHz. The output power is adjustable in preselected steps between 10 mW and 250 mW. Mic gain is adjustable as well. Every Q5X transmitter uses the latest lithium-ion battery technology to maintain a green environment while providing 4 to 15 hours of runtime (depending on battery size and transmitter power) on a single charge. www.q5x.com/ 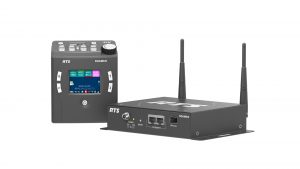 RTS
The new ROAMEO is an easy-to-use communications system based on a wireless keypanel in the form of a beltpack. The system provides high-quality audio and caters to a large number of simultaneous users across a wide coverage area. Operating like a wireless keypanel, ROAMEO can be fully integrated into an existing ADAM series. The system allows users to address either individuals or specified groups. The system consists of the TR-1800 beltpack, the AP-1800 access point, and accessories: a charger, holster, and pole-mount kit. Connection to a digital matrix is established via a single Ethernet cable. In addition, the system can use standard IT infrastructure, which ensures easy installation and low maintenance costs. Capacity can be increased by adding wireless beltpacks and associated access points.

The Digital 6000 Series uses the same long-range mode and proprietary Sennheiser Digital Audio Codec as the Digital 9000, Sennheiser’s top-of-the-range wireless series. The two-channel Digital 6000 receiver works across a switching bandwidth of 244 MHz (470-714 MHz), which is covered by three transmitter versions (470-558 MHz, 550-638 MHz, and 630-718 MHz). Up to eight receiver units can be daisy-chained without the need for an additional antenna splitter. System latency is 3 ms, and Digital 6000 features switchable AES 256 encryption.

The SK 9000 is a high-resolution, uncompressed digital wireless beltpack transmitter, compatible with 3-pin LEMO-connector lavaliere microphones. The user interface features an icon-based menu structure and infrared synchronization with the receivers, as well as exchangeable energy packs with lithium-ion batteries. The SK 9000 accommodates up to eight receiver channels.

The SK 5212-II is an ultra-compact bodypack that uses one AA battery and offers transmission over a switching bandwidth of up to 184 MHz in 5-kHz steps. The SK 5212-II features switchable output power of 10/50 mW, plus a low-intermodulation power mode that increases the linear headroom of the amplifier. Other features include HiDyn Plus noise reduction, backlit LC display, adjustable audio sensitivity in steps of 1 dB from –30 to +40 dB, and a switchable low-cut filter. www.sennheiser.com/ 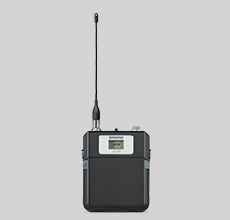 Zaxcom
The ZMT-Flex wireless transmitter is constructed from a soft yet durable silicon rubber that allows the transmitter to bend and flex, providing an elevated level of safety for the professional athlete. The device features rounded corners and is extremely thin at only 0.4 in. (1.02 cm) and weighs only 3 oz. (85 g). Part of Zaxcom’s patented Digital Recording Wireless line, which can transmit a fully encrypted digital audio signal while simultaneously recording the audio internally, the unit is versatile, capable of transmitting audio from a single mono microphone or dual microphones in stereo through two microdot inputs. The internal recording simultaneously provides a catalog of all audio, whether transmitted or not, to a microSD card with timecode. The audio is recorded to a highly reliable lossless format called MARF, which eliminates file corruption due to a dead battery or early card removal. axcom.com/products/zmt3-flex