With the help of Clemson’s football dynasty, the ACC Network punched its ticket to New Orleans in its first year of linear operations. Prior to the first snap of tonight’s College Football Playoff National Championship Game, the network worked around gloomy weather and a tight schedule to produce nearly 20 hours of pre/postgame content. 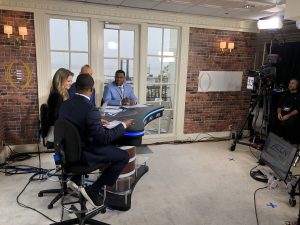 The ACC Network constructed three physical sets, including this one inside the Jackson Brewery location.

“It’s three days in three different locations,” explains Aaron Katzman, coordinating producer, ESPN. “Saturday was Media Day at Xavier University. which was a whole setup. Jackson Brewery is functional and operational all weekend, but weather caused a lot of changes. We have two inside sets going on at the same time, which is a pretty remarkable achievement to put a year’s worth of planning and then, in two hours, move everything inside because of lightning and thunderstorms.”

In the Heart of NOLA: Three Main Sets Take Over the French Quarter

Debuting on the main stage with this production, the network has flaunted its lineup of studio shows at Jax Brewery on the perimeter of historic Jackson Square, including The Huddle with Dalen Cuff, Eric Mac Lain, EJ Manuel, Mark Richt, Kelsey Riggs, Jon Beason, Roddy Jones, and Mark Herzlich; and Packer and Durham (sans dogs). On the building’s fourth floor, three physical sets were constructed and are being used by a wide range of talent.

“This facility works great because you get multiple angles with multiple sets,” says Amy Rosenfeld, VP, production, ESPN. “The ESPN team scouted this location the week after the National Championship Game last year, and Aaron sat down with [Coordinating Director] Lorenzo Lamadrid and [Managing Producer] Lindsey Lloyd and fit [our coverage] into the puzzle because the complexity of the timing is really something.”

Developing an intricate plan is a major reason the ACC Network’s coverage is rolling along with minimal hiccups. With the Tigers once again in the mix as one of the best college football teams in the country, Katzman, Rosenfeld, and the rest of the crew got a bit of a head start on planning, based on the likelihood that they would be making a trip to the Big Easy.

“The great thing about Clemson is that everyone is always aware that there is a really good chance they’re going to be here in the National Championship,” Rosenfeld continues. “If they potentially win it all, it provides an opportunity to have a lot of positive content.”

Despite the network’s best-laid plans, a patch of weather bringing wind, rain, and even a potential tornado derailed the original blueprint for the shows. Many of the outdoor or semi-outdoor plans — including the idea of having the Mississippi River as the background — were ultimately foiled. The staff decided to move operations indoors and use spacing to produce numerous shows simultaneously. 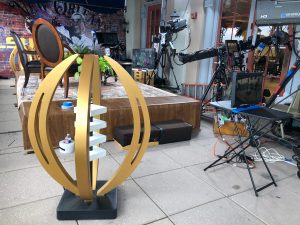 Despite the weather, a set is being used in a semi-outdoor patio area.

Along with the weather problems were timing issues. The physical set inside the Mercedes-Benz Superdome was in jeopardy of having to be assembled and placed on the field a day later than usual.

“Monday, we’re at the Superdome, which had its own set of issues,” says Katzman. “A week and a half ago, there was a lot of thought that the New Orleans Saints would host a playoff game, and that would have pushed us back to bringing our equipment onsite a day later.”

A Makeshift Content Factory: A Deeper Look at the Jax Brewery Setup
Bringing a variety of studio shows on the road has its share of logistical hurdles. In an unfamiliar venue, the ACC Network created a temporary control room responsible for a majority of the onsite production duties. An onsite producer, director, and other staffers who raise the total to 15 are working in New Orleans, but, at headquarters in Bristol, CT, graphics implementation and the final product are handled in a dedicated control room. This not only allows a streamlined workflow but also permits high-profile shows deriving from that location to use shared resources, such as footage. 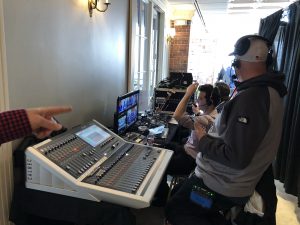 In addition to production functions handled in Bristol, the crew has a temporary control room onsite.

“We have a core group of ACC Network people that are here,” says Katzman. “In addition, there are others doing everything on the technical and production sides. One of our directors working on the pregame show is also directing NFL Countdown, so it’s really all hands on deck and one big team to help the ESPN family out.”

Although the environment may be crowded, the setting has allowed both talent and behind-the-scenes personnel to establish a stronger bond with those associated with ESPN’s NFL side.

“It has been great to see our talent in an office space like this with College GameDay talent and watch some of the newer TV personalities be flies on the wall with these people,” Katzman says. “It has also been great for all of them to share stories with each other and cross-promote material on the shows.”

Although another network is busy churning out content that highlights the opposing LSU Tigers, the ACC Network is working hand-in-hand with the SEC Network as well. There has been some on-air crossover — including having the SEC Network’s Marty and McGee on Packer and Durham, Richt speaking in a segment with former SEC head coach Gene Chizik, and Mac Lain and former Alabama quarterback Greg McElroy on College Football Live — but, more important, the new network is leaning on its heavily experienced colleagues.

“You’re always looking for signature moments for a brand-new network,” says Rosenfeld. “We benefit that the SEC Network has been doing this for a while.”

Crescent City Celebration: ACC Network Relishes the Tigers’ Success
After setting up shop and following a well-organized agenda, there has been a fair share of notetaking for the next time an ACC institution makes it to the final game of the college-football postseason. 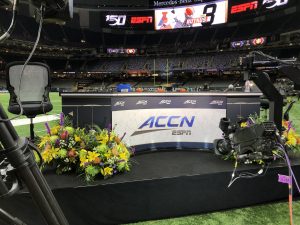 Among ACC Network sets in New Orleans is one in a corner of the field at Mercedes-Benz Superdome.

“Media Days were interesting because both ACC Network and SEC Network worked with hardwired microphones and it became a bit difficult with these cables because we used roaming reporters,” Rosenfeld explains. “We decided that, next time, we’ll go with RF mics. We’ve been trying to be very aggressive in a remote location with the studio — more aggressive than what we originally planned. There have been a lot of lessons learned because you need to pool the technicians and make sure they’re getting their breaks or, if a taping goes long, how that affects everything else.”

Even with a list of changes for the next go-round, the past few months have been a tremendous start for ESPN’s newest addition. And, for the onsite crew, the event is an excellent way to cap off their first year of linear broadcasts.