With nearly 80 cameras, 15 production trucks, and 15 viewing options on its highly popular MegaCast, ESPN is covering tonight’s College Football Playoff National Championship Game at New Orleans’s Mercedes-Benz Superdome about as extensively as any sports event has ever been covered on television. However, the game is typically only a portion of the story at an event like this.

The crown jewel may be Monday night’s tangle between Tigers, but the weekend prior was full of celebration and festivities in New Orleans for fans of LSU, Clemson, and the sport of college football. ESPN is in the heart of the French Quarter to capture the entire environment and tell the stories behind this highly anticipated title clash. 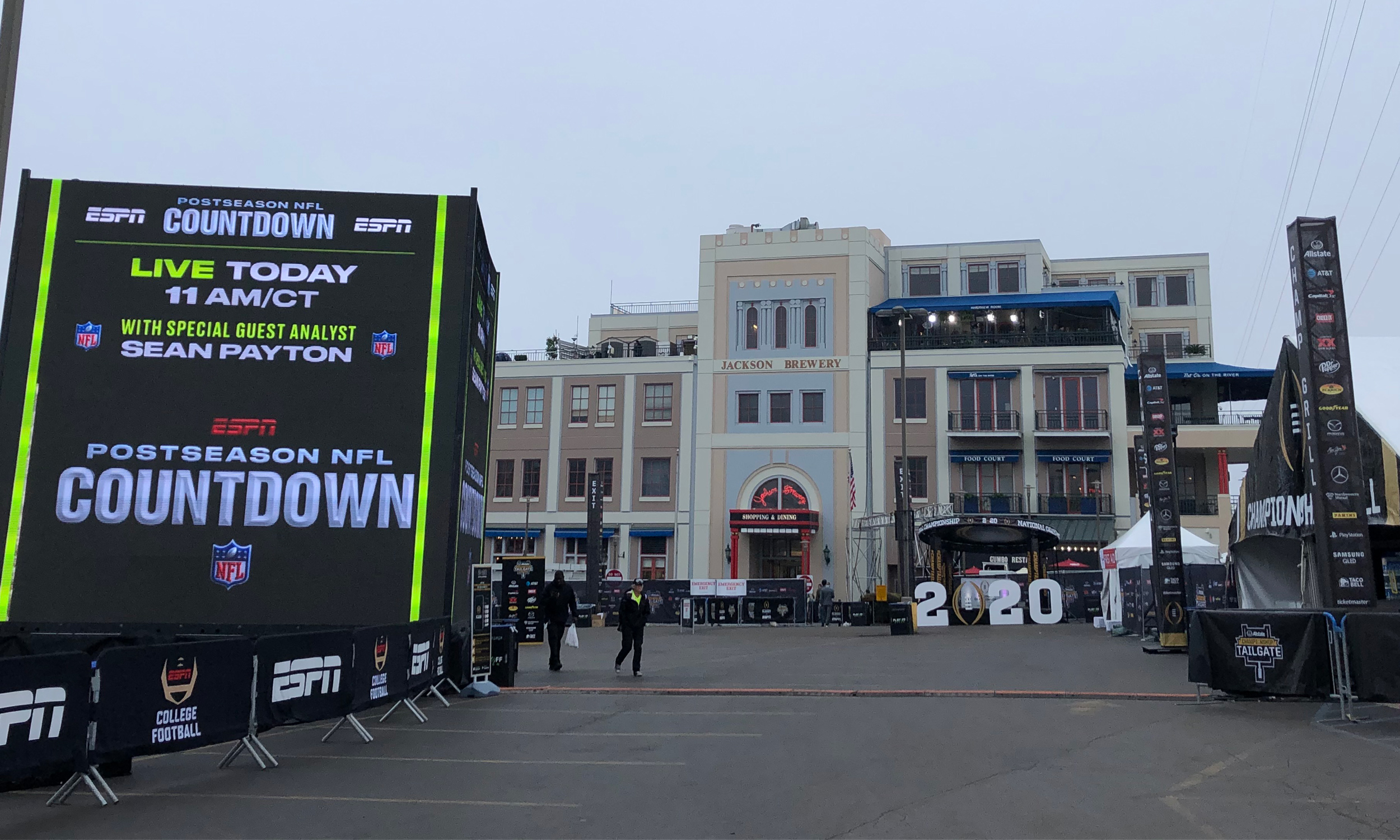 ESPN has taken over the top floor and the parking lot of the historic Jackson Brewery (or Jax Brewery), located on the eastern skirts of the French Quarter along the Mississippi River. In this remote studio, the network has set up five sets for television production, as well as office space for long tables for on-air talent and above- and below-the-line production and operations personnel to meet, work, and prepare for showtime. Jax Brewing has essentially become a mini Bristol, churning out hundreds of hours of live and recorded content for all the ESPN linear networks and digital platforms.

“We looked at a lot of places, and, at the end of the day, this was the most open space in Downtown New Orleans,” says Bob Braunlich, VP, remote production operations, ESPN, who is working his final CFP National Championship Game prior to retiring in April after 38 years with ESPN and ABC Sports. “It’s close to the French Quarter, where people who come to visit want to be. There really isn’t a lot of space around the stadium. We were looking and looking and looking, but we always kept coming back to here.” 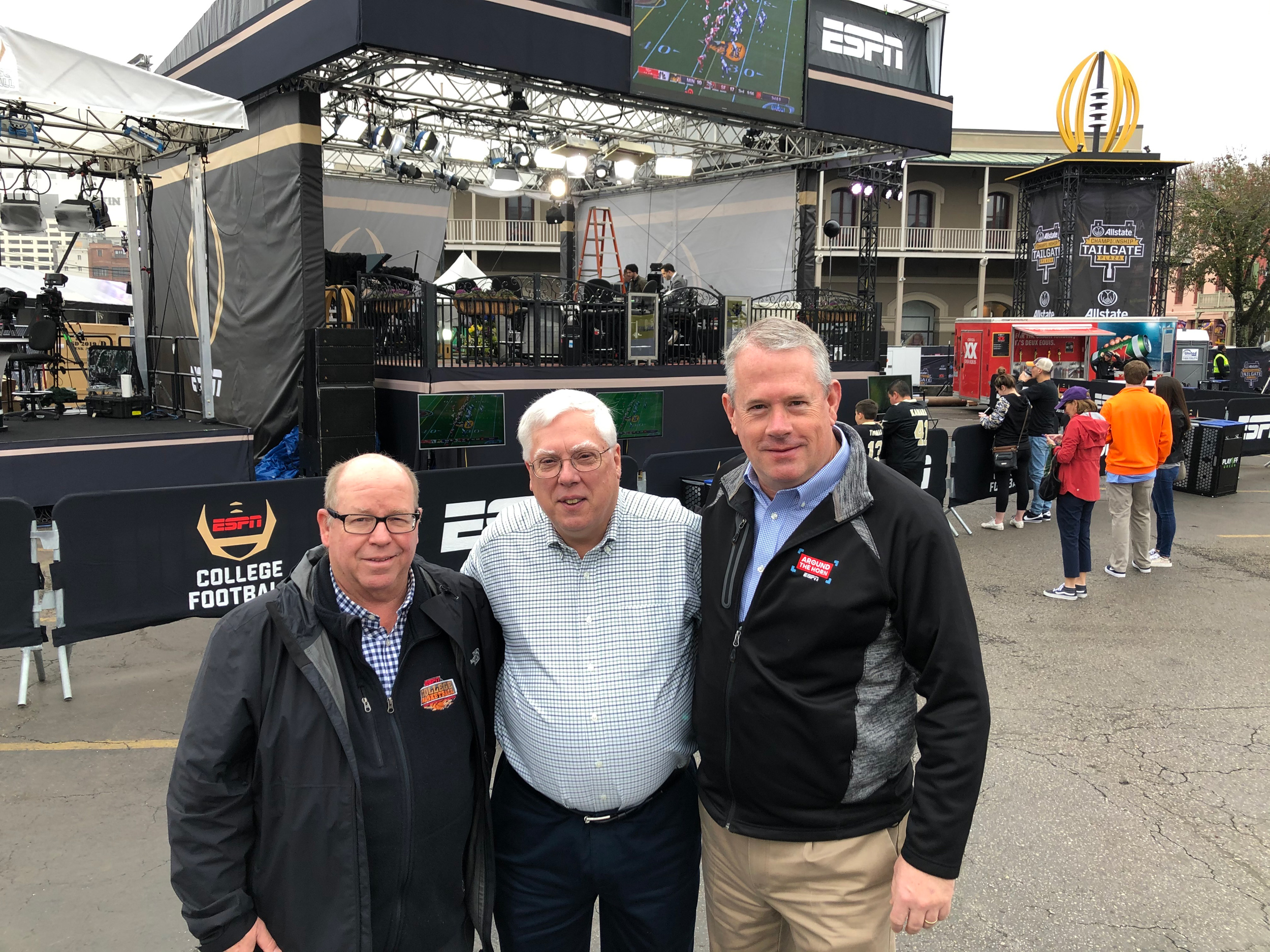 Many of ESPN’s most notable linear entities called Jax Brewery home this weekend, including College GameDay (which has multiple sets around the city, including the main set outside Jax Brewery and one near the stadium), the morning show Get Up! (on both Monday and Tuesday), both the SEC Network and the ACC Network, and SportsCenter on the Road. Even NFL Countdown hosted its weekly morning programming from the main outdoor set at Jax on Sunday.

“We like to have fan engagement,” notes Braunlich. “We want to put our set where fans can come dressed in their jerseys. If you are sitting at home, it makes you feel like something big is going on.”

Perhaps the biggest themes from this home-away-from-home for the ESPN team has been the collaboration and the flexibility of its crew. Nearly 100 operations personnel are onsite to make this all work, and, in many cases, that means navigating multiple shows throughout a day and helping out wherever necessary. For example, a camera operator is dedicated not to a show but to one of the five sets and helps shoot any of the shows or live hits that occur on that set in a given day. 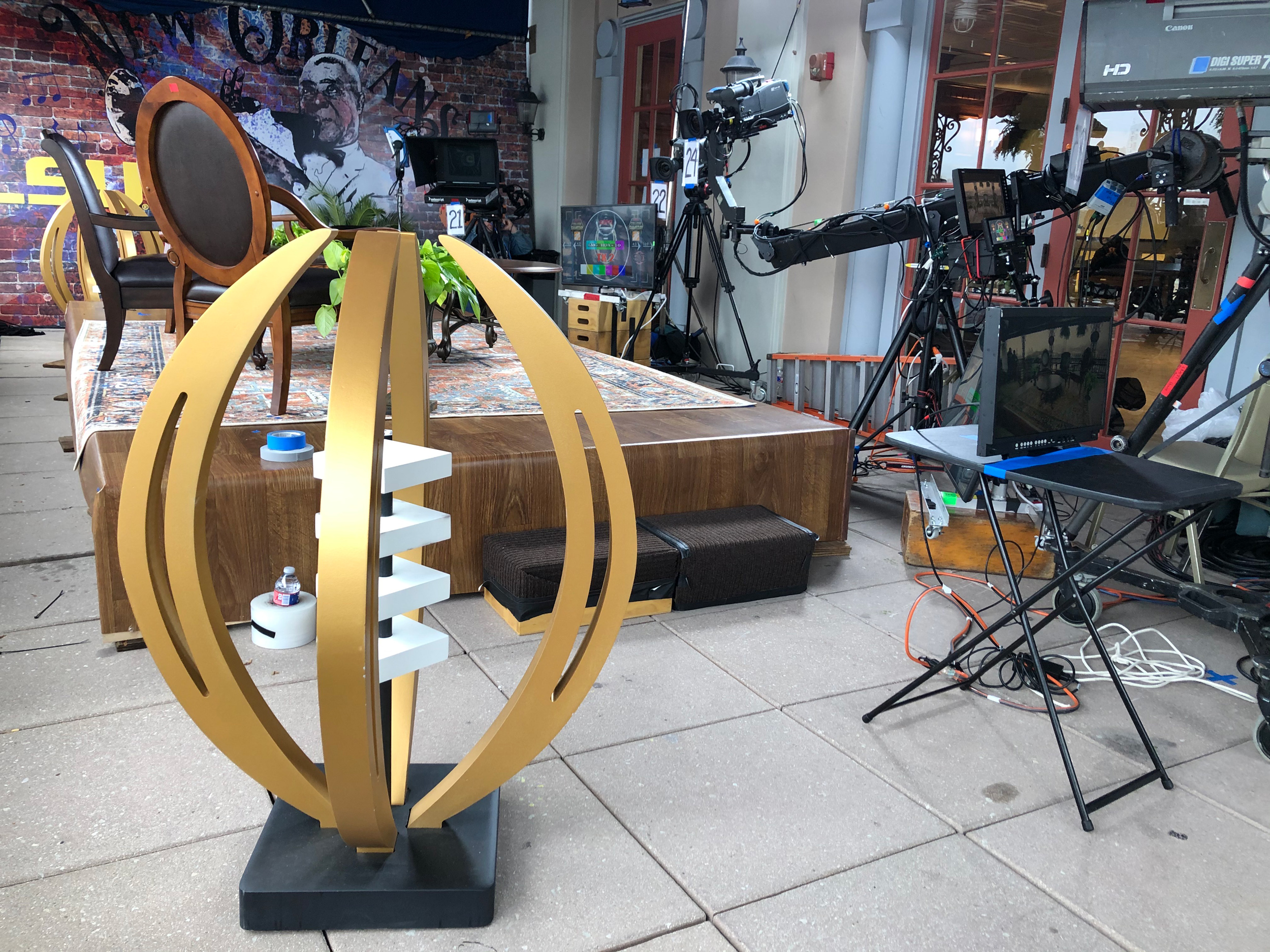 The “Blue Awning Set,” one of four studios on the top floor of Jax Brewery, was used intermittently because of rain and wind throughout the weekend. Sunday NFL Countdown and various SportsCenter hits are produced there.

The entire operation is supported by a pair of Live Mobile Group production trucks. Given the compact parking lot, ESPN was unable to roll in the 53-ft. expandos customary on a production like this. Instead, the network worked with LMG to park two of its trucks, the 38-ft. HD-2 and 42-ft. HDX-10, behind the main outdoor stage. The trucks are lean and mean, offering only two EVS servers for replay in each truck, which Braunlich says is plenty for the operation’s needs.

Both trucks offer the added benefit of satellite uplink. On the transmission front, three fibers are coming into the facility, and three are going out to accompany that satellite uplink. With a nerve center serving so many linear networks based in various geographies (Bristol, CT; Charlotte, NC; across New Orleans at the stadium), a lot of talkback and playback is needed for the various sets to monitor on-air content. 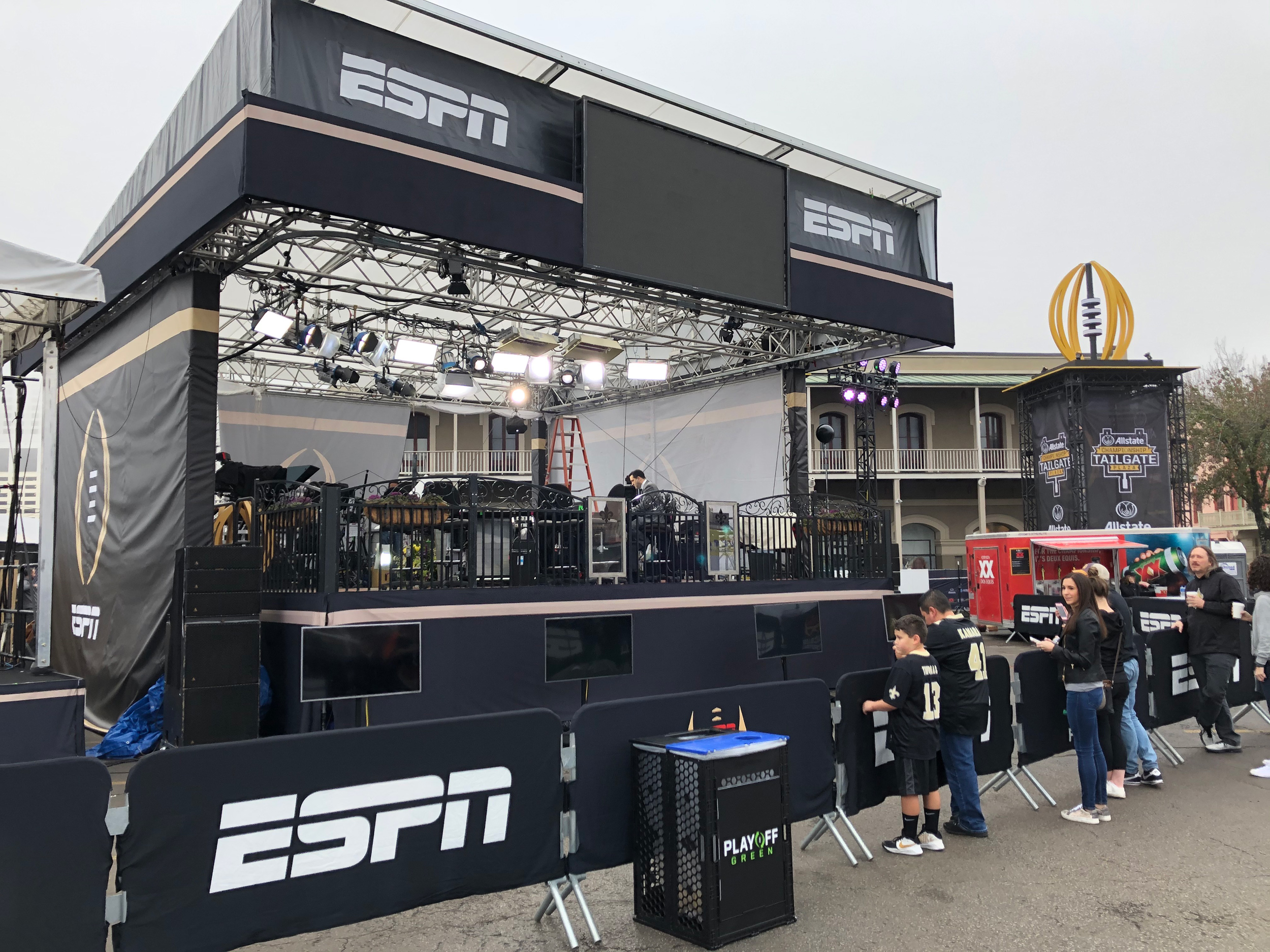 ESPN’s primary set is in the Jax Brewery parking lot so that fans can filter in and watch live tapings. College Gameday used the stage at various points leading up to the National Championship Game.

Turning what is essentially an open-concept ballroom surrounded by windows with no television infrastructure into a high-powered broadcast center for a multitude of media entities was, unsurprisingly, wrought with challenges: lighting, sound, connectivity, simply having enough space for all the people and equipment stationed there.

The most notable obstacle, however, was the weather. Friday and Saturday, in particular, were particularly treacherous, with high winds and rain threatening to give way to tornadoes in the area. It put a damper on much of ESPN’s ability to shoot programs outdoors, but, more important, it made safety of everyone onsite the very top priority. 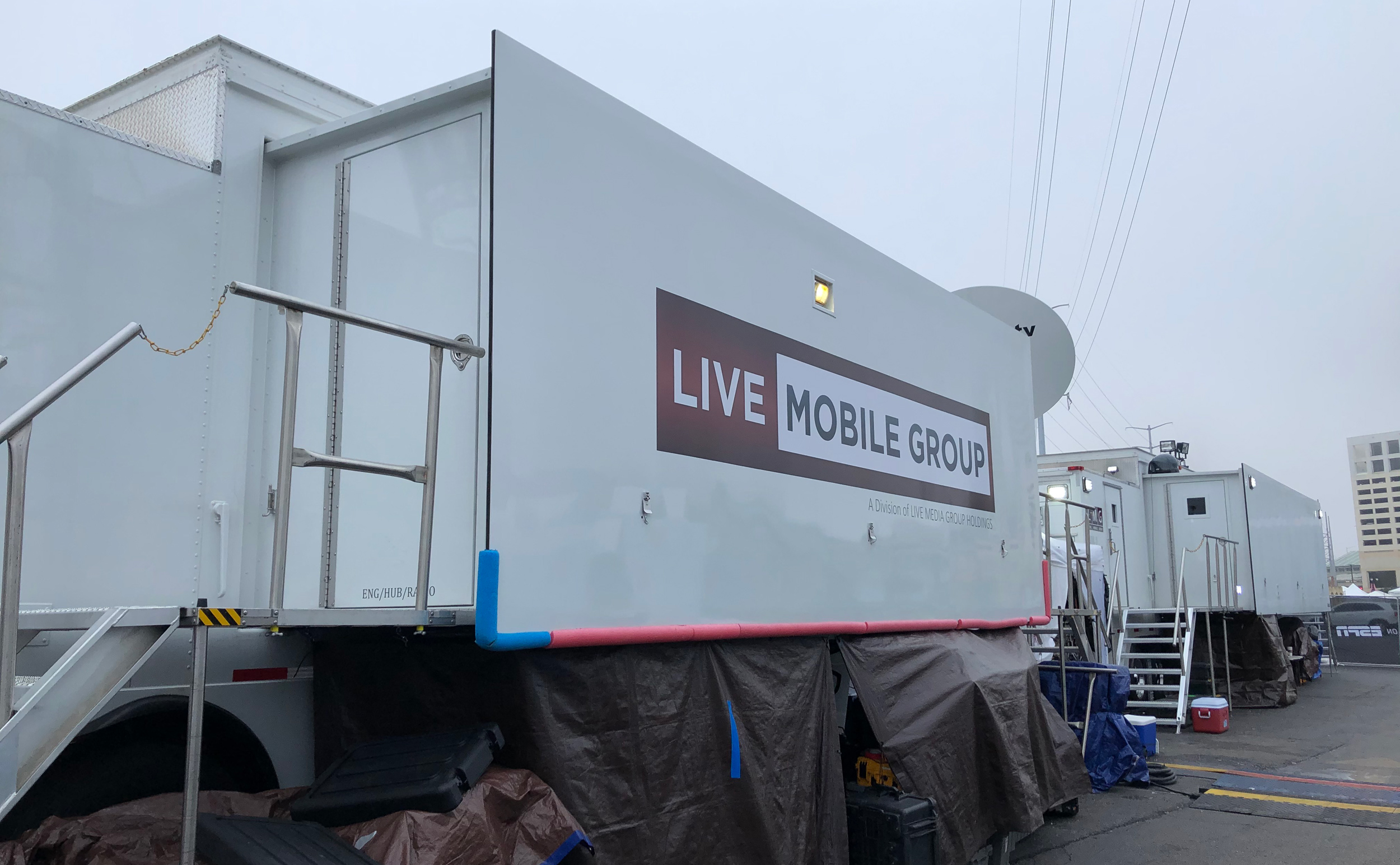 Because the parking lot outside Jax Brewery is small, ESPN brought in compact mobile production units. Live Mobile Group helped out, providing two of its trucks.

“We left Friday not knowing if, when we came back on Saturday, things would be torn apart,” says Braunlich. “But our crew did an absolutely incredible job.”

ESPN also had protocols in place if a tornado warning was, in fact, issued by the National Weather Service. The entire staff onsite was to quickly retreat to a designated place of refuge in the basement of Jax Brewery.

Fortunately, no tornadoes touched down throughout the weekend. High winds and rain were still a problem, though. A couple of the sets were designed to reside on balconies extending off the top floor of the building. They were used periodically throughout the weekend, but numerous programs had to be brought inside because of rain and winds, causing the team to add a fifth, open, standing-only set when the original plans called for only four shooting positions.

“Sometimes necessity is the mother of invention,” laughs Braunlich.